It's just a silly phase I'm going through

Here are my Guardians, straight outta 1975: 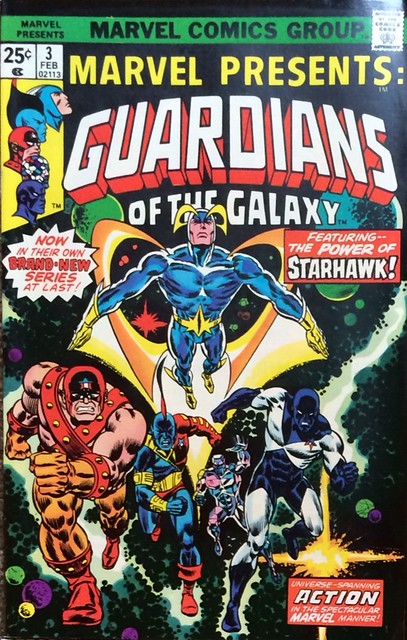 Steve Gerber wrote the Guardians stories during my comics collecting days. I was a big Gerber fan back then, and read everything of his I could get my hands on. I have no idea what Marvel plans to do with Howard the Duck, but (Spoiler Alert!) I assume his appearance at the end of the movie was a nod to Gerber’s work on the old Guardians. Or maybe it was just a recognition that a racoon wasn’t the first anthropomorphic animal hero.

One of the old Guardians did make it into the movie. See the blue-skinned guy with the red fin coming out of his head? That’s Yondu, he of the whistle-controlled yaka arrows. Same blue skin but with a bar on top of his head instead of a fin. And the comic book Yondu didn’t have Michael Rooker’s menacing southern accent, probably because he was from Centauri IV.

The token Earthling, Vance Astro2 (in the blue and white outfit), like Peter Quill, left Earth in 1988, but he wasn’t abducted. Astro volunteered. He was put in suspended animation, bundled into a rocket, and shot to Alpha Centauri in a poorly thought-out attempt to save the human race. In the 1988 of 1975, we were all dying of cancer because we’d destroyed the ozone layer.3 How was one man alone supposed to start a colony on another world? Beats the hell out of me.

Marvel didn’t even think to give Astro an awesome mixtape, because predicting rockets to Alpha Centauri was easier than predicting the Walkman. You’d think they could’ve at least given him an 8-track player.