None of this stuff warrants a post of its own, but I thought it was all worth a mention.

I finally started using Bartender to organize my menu bar apps. I had resisted because I don’t use many menu bar apps and didn’t really feel the need to hide any. But Bartender provides a service that’s more important than hiding icons: it allows you to arrange the menu bar icons in the order you want and keeps them that way. Of course, once I had Bartender installed it seemed worthwhile to hide a few icons.

It’s a shame Apple doesn’t let us organize our menu bar apps the way we can organize the permanent items in our Dock. The value to the user is the same: you spend less time hunting because the item you’re looking for is always in the same spot. (Yes, this is akin to the Spatial Finder.)

I’m not surprised Apple doesn’t care about consistency in the menu bar (apart from Notification Center and Spotlight). I’ve heard from Yosemite beta testers that Apple is removing the ability to “pin” the Dock to one corner of the screen. The process is explained in this article by Shawn Blanc. Because of the way the Dock grows, I prefer to pin my (vertical) Dock to the top right corner. This keeps my most used apps in the same spot all the time. 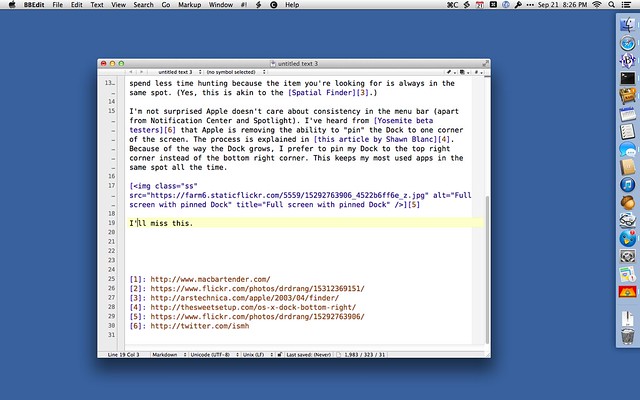 One of the icons Bartender is hiding is for Box, a Dropbox-like service that Ben Thompson wrote about back at the beginning of the year. I signed up for the free tier of storage to see how it compared to Dropbox. It doesn’t. I really shouldn’t have the Box icon hidden below Bartender, I should drop it completely because it’s never worked well for me.

When I first started using Box, it refused to sync OmniGraffle files. I assume that had something to do with the fact that OmniGraffle files are actually folders, although regular folders didn’t cause any problems. In any event, that problem seems to have been fixed. A couple of weeks ago, though, it wouldn’t sync a large (> 300 MB) PDF. I can’t use a service that’s so picky about what it syncs.

Only laziness and forgetfulness has kept me from migrating everything out of Box and deleting it from my systems. That’ll change this coming week.

Update 9/22/14
Jaymes Sorensen tweeted me a link to this Box help page, which explains that there are file size limits for each type of account. The free account I was using to test the service has a limit of 250 MB, which explains my experience.

While I can understand Box’s motivation for limiting file size on free accounts (I suspected that was the problem before Jaymes’s tweet but was too lazy to go looking for the reason), I don’t like the idea that even the paid accounts have file size limits. To me, a valid pricing model can be based on total storage, bandwidth, or some combination of the two, because there are real costs with storage and bandwidth. Limiting file size seems arbitrary.

Another new thing I’m trying out after hearing about it from an internet friend is FastMail. Gabe Weatherhead has written several articles about it and recently explained his setup in a podcast. I’m currently doing the 60-day (!) trial but fully expect to sign up when the trial is over. FastMail provides real IMAP, not the kind-of IMAP that GMail does, and its webapp is fully the equal of GMail’s in functionality and is, in my opinion, much better looking. 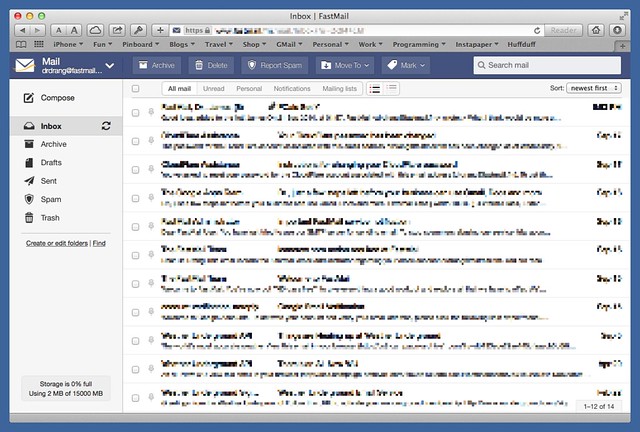 I won’t be giving up my GMail address, but I probably will start forwarding it soon. And I’ll probably start using a new “drdrang” address once I get some DNS changes made here.

Speaking of DNS changes, I’ve been fiddling with the site here to try to eliminate the occasional Internal Server Error messages you may have seen over the past couple of months. Working with the support people at my web host, I’ve tried several things, including using CloudFlare as a CDN which did some DNS switching. Nothing’s really worked, so it looks like ANIAT has finally outgrown shared hosting. At least if it’s going to remain a dynamic site.

Which has got me thinking more seriously about a couple of things: turning ANIAT into a static site to improve its speed and capacity, and selling advertising to pay for more robust web hosting. It’ll be an interesting autumn.