I recently read Ancillary Justice, the Hugo and Nebula award winning novel by Ann Leckie and enjoyed immensely, but it had one paragraph that brought me up short. The reason involves fluid mechanics, so it seemed like a good topic for a blog post.

But first the book. Ancillary Justice has a good story, but what hooked me was the way the story is told. The main character and narrator is an artificial intelligence that’s used primarily to run a military spaceship. The AI is shared among hundreds of reanimated corpses that act as the ship’s footsoldiers. The chapters alternate between two time periods about 20 years apart. Using multiple times is a common narrative device, but Leckie layers on other multiplicities.

First, because the narrator has hundreds of bodies, several of the scenes—fighting scenes in particular—are told from multiple points of view by the same narrator simultaneously. Second, as the characters move to different planets with different cultures and languages, they change genders. Their naughty bits and their personalities stay the same, but their perceived role in society flips. In scenes where two languages are being spoken, the gender of a character can change from one sentence to the next.

Leckie handles these shifts in time, position, and gender nicely, leaving you surprised but never confused. There’s also an interesting parallel between the main character and one of her former captains, a regular, non-corpse human who’s been awakened after a thousand years in suspended animation. Leckie’s light touch keeps their relationship interesting.

As for the paragraph that brought me up short, it comes during a scene in which the narrator and her former captain are falling together from a bridge. The narrator, an individual corpse soldier who’s cut off from the main AI, is trying to figure out how to slow the fall and survive.

If I had been more than just myself, if I had had the numbers I needed, I could have calculated our terminal velocity, and just how long it would take to reach it. Gravity was easy, but the drag of my pack and our heavy coats, whipping up around us, affecting our speed, was beyond me. It would have been much easier to calculate in a vacuum, but we weren’t falling in a vacuum.

Maybe this is just a clumsily written passage, but I don’t think so. Leckie isn’t a clumsy writer. As I read it, the “it” of the last sentence can only be either the terminal velocity or the time it takes to reach terminal velocity. But there is no terminal velocity in a vacuum. Objects that fall in a vacuum don’t stop accelerating until they hit the ground. The narrator of the story should know that, but apparently Leckie and her editors don’t.

Terminal velocity is the maximum speed an object achieves while falling through a fluid.1 When you drop something, gravity pulls it down while the viscosity of the fluid pushes back up. At first, the force of gravity is stronger than the resistance, and the object accelerates. But while gravity remains constant, the viscous resistive force increases with increasing velocity. Eventually, these two forces balance, and the object stops accelerating. It continues its fall at this constant, terminal velocity.

One way to express the drag force, \(F_D\), is through this equation:

When a falling object reaches terminal velocity, the drag force equals the object’s weight. You probably recall from your physics class that weight can be expressed as \(mg\), where \(m\) is the mass of the object and \(g\) is the acceleration due to gravity.

Setting the two forces equal to one another,

and solving for \(v\) gives

This is the expression for terminal velocity.

You might be wondering why we use an equation with just a \(v^2\) term when we said earlier that for some fluids the drag force is directly proportional to \(v\). The answer lies in how we define the drag coefficient.

Nowadays, you can go to Wolfram Alpha to calculate the drag coefficient of, for example, a sphere, but when I was a student you’d get it off of graphs that looked like this: 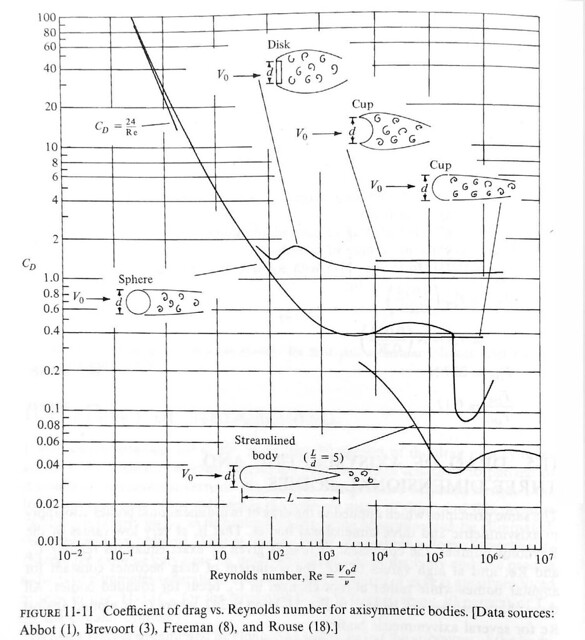 The horizontal axis is the Reynolds number, one of the many nondimensional numbers you run into in fluid mechanics. Supersonic flight has made the Mach number more well known, but the Reynolds number has more applications in engineering. Using our terminology, it’s defined as

In the upper left of the graph, you’ll see a straight line and the formula \(C_D = 24/\mathrm{Re}\). This is the special case of laminar flow around a sphere, the situation covered by Stokes’ Law. If we substitute

into our expression for \(F_D\) and express the cross-sectional area of the sphere in terms of its diameter, we get

This is usually written

where we use the radius instead of the diameter and the dynamic viscosity, \(\mu = \rho \nu\). Either way, you can see that for low Reynolds numbers, the definition of drag coefficient leads us to a result in which the drag force is directly proportional to velocity.

When I was a kid, you’d see examples of Stokes’ Law on TV all the time.

The pearl dropping through Prell was so iconic, commercials in the 70s could just show it without saying a word about it.

How can I be sure this commercial is from the 70s? Just look at Lauren Hutton’s hair at the end of it.

Getting back to science fiction, there’s a famous example of terminal velocity in Arthur C. Clarke’s Rendezvous with Rama. One of the expedition party to Rama (a huge and mysterious cylindrical spaceship/world that spins to provide artificial gravity on its inside surface) is stuck on a 500-meter-high cliff and needs to be rescued. The solution is for him to simply jump off the cliff and fall into the ocean below. The artificial gravity is low and so, therefore, is his terminal velocity. He (spoiler alert!2) survives the impact with the water and is picked up by the rest of the crew.

Rendezvous with Rama, like Ancillary Justice, got both the Hugo and Nebula awards. Clarke may have understood physics better than Leckie, but his storytelling isn’t as inventive as hers.