Circling the drain with Drafts

A Mac-only solution isn’t very satisfying anymore, so last night’s post on using Services to create ⓒⓘⓡⓒⓛⓔⓓ, pǝddılɟ, and s̸t̸r̸u̸c̸k̸ ̸t̸h̸o̸u̸g̸h̸ text felt incomplete. Combining the logic of the Python conversion scripts in that post with what I learned about using JavaScript in Drafts 4, I made three new keyboard scripts to convert selected characters in Drafts.

Each script works pretty much as you’d expect. Type in some normal text, select the portion you want converted, and tap the appropriate button. Voila! 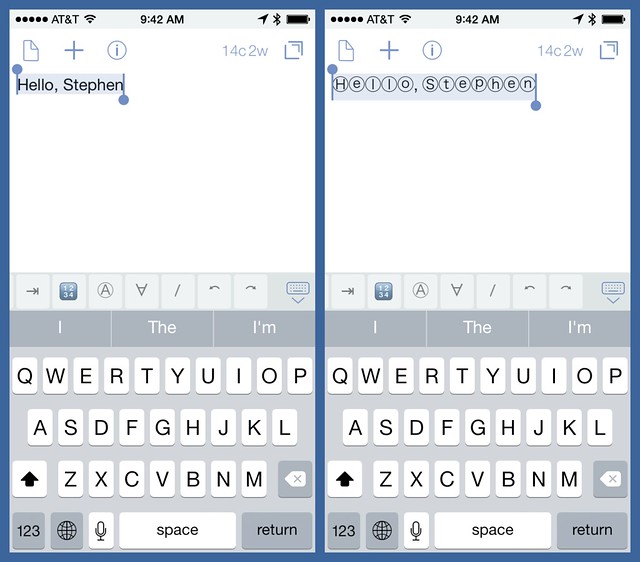 The script that does the encircling is this:

The structure of the encircle function is pretty much stolen wholesale from one of the answers to this Stack Overflow question. It takes advantage of a feature of JavaScript familiar to old Perl programmers: the replace method can take a function as the replacement argument. That function, lookup, is defined in Line 7 and the trans object it uses to replace characters is built in Lines 9–11. The regular expression in Line 5 that serves as the first argument to replace is very simple because all the work is done by lookup. Line 16 gets the selected text from the draft, converts it, and replaces the selection with the converted text.

Update 10/18/14
People who think I know what I’m doing with this stuff are so misguided. Nathan Grigg, an actual programmer who’s actually smart, pointed out on Twitter that the regular expression I was initially using was far more complicated than it needed to be. He was, of course, absolutely correct, so I’ve simplified it in both this script and the character flipping script below. The descriptions have been edited to match the new code. Thanks, Nathan!

The key that applies this script is built by tapping the pencil icon at the end of Drafts’ custom key strip, tapping the + button to add a new key, choosing the Script option, and then entering the label, name, and script. When you’re done, a new key with that label will appear in the strip.1 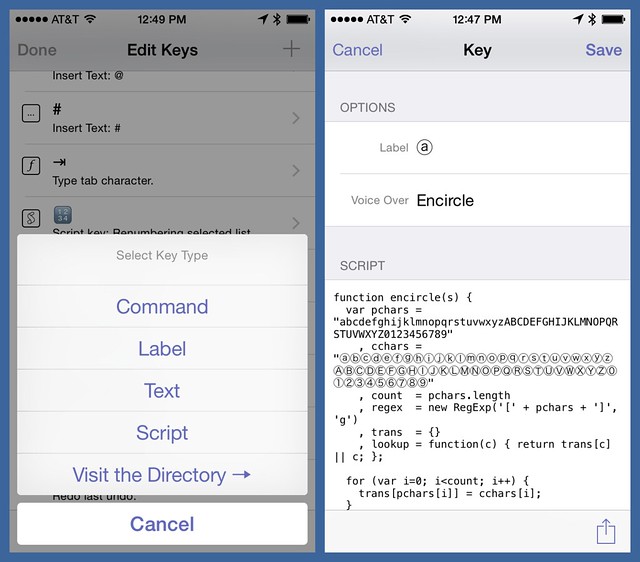 The flipping script is built the same way.

Apart from the two strings that define the conversion, there are a two other differences between this script and the encircler:

This one doesn’t do any replacing, because there aren’t “stuck out” versions of all the letters. Instead, it puts the COMBINING LONG SOLIDUS OVERLAY character (decimal 824, hex 0338) after every character in the string. The combination appears as a character with a diagonal line through it.

It should be easy enough to use these scripts as guidelines for creating other conversions. sᴍᴀʟʟ ᴄᴀᴘs, for example, seems like something Than Tibbetts should be all over.

Because these key definitions seem fairly simple and robust, I’ve uploaded them to the Keyboard Extensions section of the Drafts Actions Directory:

You can install them from there if you don’t want to go through the character-building2 exercise of making them yourself.

The rest of the script remains the same. With this change, you can toggle between circled and plain using the same key command. Same thing can be done with the pchars and fchars variables in the flip function.