I don’t own an iPad, and I don’t much care for articles about the business side of the computer industry. But I do have a blog, which automatically makes me an expert on both. 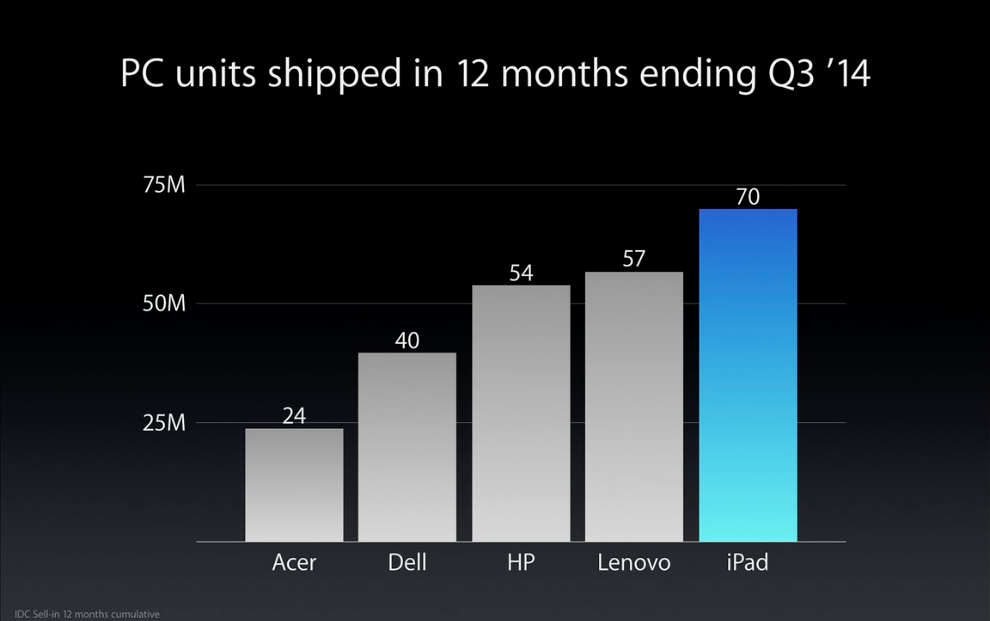 When Tim Cook showed this slide during the recent Apple Special Event, it was a way of avoiding showing an updated version of this slide from last year’s October event: 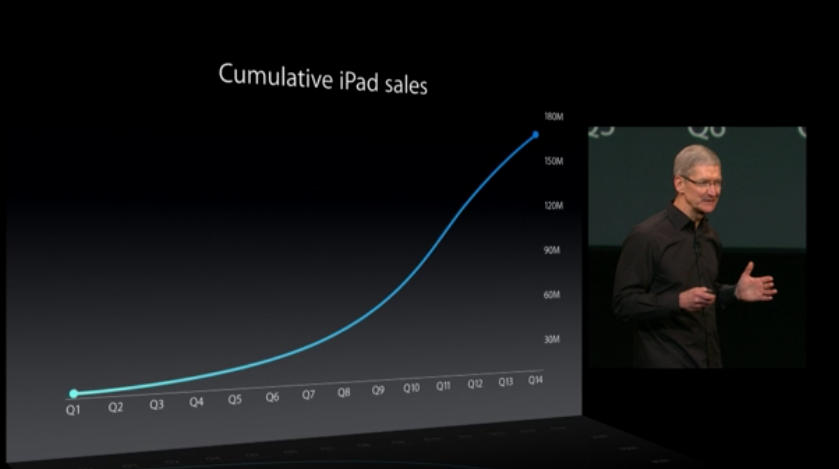 In an updated graph, the downward curvature would be more prominent.1 For the past three quarters, iPad sales have been down from the year-ago quarter, and the unthinking wing of the tech press has finally picked up on it. Stories have shifted from “iPad will take over all of computing” to “iPad is a failure.” Tim’s slide comparing the iPad to all of Lenovo, HP, etc. puts this “failure” in perspective. A more nuanced view may be in order.

When the iPad was first announced, I gave it a lot of thought. My late-2004 iBook G4 was stuck on Leopard, the last version of OS X that supported the PowerPC, and third-party developers were starting the shift to Intel-only applications that would leave my old G4 even further behind. Even worse, the power supply connection was getting flaky, and it seemed foolish to pay for repairs to a machine that was on the way out.

The question was: could an iPad take the place of my iBook G4? After the iPad was released, the answer was clearly no. Luckily, Apple came out with the redesigned and actually usable version of the MacBook Air later that year, and that solved my replacement computer problem. I’m still using it.

The time I spend thinking about that first iPad wasn’t wasted, though. When the iPad 2, with its A5 chip2 and front-facing camera, came out the next year, I got one for my wife, and it’s been her main computer ever since. It fits her needs very well, but the areas where it doesn’t fit illustrate why we haven’t yet shifted into the post-PC era.

First, there’s the problem of web sites that don’t work with iOS devices. I’m not talking about responsive design here,3 I’m talking about sites with “clever” JavaScript-based interaction features that simply ignore the possibility that users may be using a tablet or phone and reveal their capabilities through cursor-only interactions like hovering. And there are still sites that insist on Flash. This isn’t Apple’s fault, and it’s a problem that’s slowly receding, but it still crops up now and then.

Second, there’s the printing problem. I know lots of young people think printing is dead, but adults still live in a world where forms have to be printed out and taken or physically mailed to offices. I solved some of this problem by getting an AirPrint printer, but pages printed from the iPad often come out poorly formatted. Some of this is certainly not Apple’s fault—the world would be a better place if form makers would just use PDF—but it could help out by giving users a little more control over printing. Even just allowing users to choose which pages to print would be a big step forward.

Finally, there’s the big problem: storage. How does someone on a iPad access all of the photos and music and video and other files that are part of the modern digital life that Apple wants us to lead? None of us can be post-PC until all of our stuff is where we can get at it without a PC. That there’s been no clean, obvious, and reliable solution to this problem is definitely Apple’s fault, and it’s kept the iPad from being a complete PC replacement.

The thing is, Apple is almost uniquely unqualified to provide the kind of online storage the iPad needs. The history of Apple cloud-based services is so laden with bad ideas and worse execution that it’s impossible not to be skeptical when a new service is announced. Still, I hold out hope that iCloud Drive is the solution, because the iPad Air 2, when combined with iOS 8’s new openness, is a compelling machine.

The performance of the A8X and the additional RAM really do make the new iPad look like a viable replacement for a notebook computer. Its Geekbench scores are well beyond those of the machine I’m typing this on. But that’s not the whole story. Apple’s always had a deep understanding that it’s software that makes hardware live up to its potential. Let’s hope it’s finally learned that network services are just as important.