Following up on last week’s post about my downed basketball hoop, a few days ago I brought an angle grinder and a few cut-off wheels home from work and turned the 9′ long, 200 lb post into five easy-to-carry pieces. The process of doing so is a good illustration of the different types of strength engineers have to consider when designing a product. 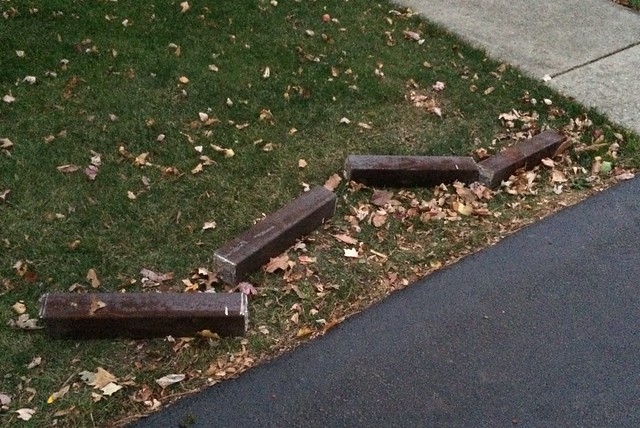 I used the angle grinder to cut through the thin steel wall all around the post. With the steel breached, it took just a light tap with a sledgehammer to break through the concrete. The solid 4″×4″ plug of concrete was easy to break for two reasons:

The thin steel envelope, however, had to be cut, because mild steel has a relatively high tensile strength and, what’s more important, is quite ductile. It can absorb huge amounts of impact energy by undergoing permanent deformation before it breaks. I could’ve beaten on that post with a sledgehammer all day long, and it would never have broken.

But the concrete was stronger than the steel in one sense. Although I tried to use a light touch with the angle grinder, I couldn’t stop myself from plunging the cut-off wheel into the concrete after cutting through the steel. The cut-off wheel is made of hard mineral particles bound together with resin and reinforced with fiberglass. Although it wears away as it cuts through the steel, it does so at a fairly slow rate. But when it comes in contact with the aggregate in the concrete, it’s mineral vs. mineral and the wheel wears very quickly as it notches into the concrete. I wore down three cut-off wheels while cutting this post; had it been hollow, I would’ve been able to finish the job with the first wheel.

There are, of course, cut-off wheels made for cutting concrete. They use much harder minerals than the wheels made to cut steel. The composite design of cut-off wheels is an interesting example of combining different materials with different types of strength. The minerals are very hard, which is good for cutting, but very brittle, which is bad for handling any off-center or impact loading. A cut-off wheel made of pure aluminum oxide would cut like crazy but wouldn’t last under real-world conditions where side loading is inevitable.1 The resin is there not only to bind the mineral particles together, but also to provide a certain ductility to the wheel. And the fiberglass adds tensile strength to handle the off-center bending loads.

Reinforced concrete is another example of composite design. The steel reinforcing bars are placed where tensile stresses will develop during service (typically in the lower halves of beams). They carry the tensile stresses while the concrete carries the compressive stresses.2

Another way to deal with concrete’s weakness in tension is to prestress it. In prestressed concrete, a clever arrangement of high-strength steel cables (called tendons) are strung though the body of the beam or slab, stretched to a state of high tension, and anchored to the concrete. This induces compressive stresses in the concrete in the places where the service loads will induce tensile stresses. The idea is to have essentially no net tension in the concrete during service.

Prestressing also works with glass. Like concrete, glass is quite brittle, but unlike concrete, glass has a high tensile strength. The unfortunate thing about glass, and the reason we tend to think of it as weak, is that it’s sensitive to notches, scratches and other imperfections. A small nick on the surface of glass will reduce the tensile load it can carry tremendously.3 To get around this problem, we can make very smooth-surfaced glass and embed it in resin to protect it from scratches (fiberglass), or we can induce compressive stresses on the surface, so the nicked and scratched don’t experience any tension.

The Gorilla Glass in your iPhone is prestressed through chemical means. In effect, big atoms are jammed into the surface of the glass, pushing the other atoms away and creating a compressive stress. This is a relatively new way of prestressing glass and is very effective.

The more traditional way to prestress glass is to thermally temper it by heating it up and rapidly cooling it. The outer surface cools first, creating a hard shell. As the inside cools, it tries to shrink, but its shrinkage is resisted by the hard outer shell. This puts the inside into tension and the outside into compression. So even when a piece of tempered glass is just sitting on a table, it’s in a state of high stress and high strain. If you do manage to break it, the high strain energy locked into the glass is released and results in many, many fractures. This is why tempered glass breaks into lots of small pieces.

The most dramatic example of thermally prestressed glass is in Prince Rupert’s drops, sperm-shaped glass toys created by dropping molten glass into water. The head of the drop is almost impossible to break directly because of it’s high compressive prestress, but any damage to the tail causes the whole thing to shatter into bits. The high-speed camera work in this episode of Smarter Everyday does a great job of showing the fracture progression.

The explanation in the clip is good, too, except for the part about how arches get stronger as you compress them. Pretend you didn’t hear that line.

According to the Wikipedia article, Prince Rupert’s drops were introduced to England by their eponym as a gift to Charles II. Our old friend Robert Hooke wrote about them in his Micrographia:

Some of these I broke in the open air, by snapping off a little of the small stem with my fingers, others by crushing it with a small pair of Plyers; which I had no sooner done, then the whole bulk of the drop flew violently, with a very brisk noise, into multitudes of small pieces, some of which were as small as dust, though in some there were remaining pieces pretty large, without any flaw at all, and others very much flaw’d, which by rubbing between ones fingers was easily reduced to dust; these dispersed every way so violently, that some of them pierced my skin. I could not find either with my naked Eye, or a Microscope, that any of the broken pieces were of a regular figure, nor any one like another, but for the most part those that flaw’d off in large pieces were prettily branched.

The move to England leads us, finally, to the real reason I wrote this post. Friday’s episode of QI had a segment in which Stephen Fry broke a Prince Rupert drop (or, as he calls it, a Dutch tear) by clipping its tail.

The embedded video is supposed to start at 19:38. If it doesn’t, scroll there.

The BBC likes to shut down YouTubers who post its shows, but it’s not very efficient at it, so I’m hoping this is still here for you. You should, of course, watch the whole episode, and all the other episodes, most of which you can find somewhere on YouTube. I recommend you fast forward through any Rev. Richard Coles part you encounter—he’s horribly dull.