A week or so ago, I was editing a program and decided I should change some variable names. I thought it would be a simple regex find/replace, and it was. Just not as simple as I thought.

I couldn’t just replace 10 with 30 because there were instances of 10 in the code that weren’t related to the variables. And because I think I’m clever, I didn’t want to do three non-regex replacements, one each for a10, v10, and x10. But I wasn’t clever enough to notice the blue coloring in the replacement pattern. Had I done so, I would have seen that BBEdit was interpreting my replacement pattern as “Captured group 13, followed by 0” instead of “Captured group 1, followed by 30,” which was what I intended. Since captured group 13 was blank, all my variable names were replaced with 0.

You see, BBEdit can capture up to 99 groups in the search pattern and, strictly speaking, we should use two-digit numbers when referring to them in the replacement pattern. But in most cases, we can use \1 through \9 instead of \01 through \09 because there’s no ambiguity. In other words, if I had been trying to change a10, v10, and x10 to az, vz, and xz, a replacement pattern of \1z would have been just fine, because the trailing z means there’s no way to misinterpret the intent of the \1 in that pattern.

So after undoing the replacement, I changed the pattern to this,

and all was right with the world.

There was another option: a named group. Here’s how that would have looked, using var as the pattern name:

I don’t think I’ve ever used a named group in any situation, whether the regex was in a text editor or a script. My general feeling is that if the pattern is so complicated I have to use variables to keep track of all the groups, I should stop and break the problem down into smaller parts.

By the way, you may have heard that BBEdit is celebrating its 25th anniversary of not sucking. When a well-documented app has such a long history, the manual starts to accumulate delightful callbacks to the olden days. As I was looking up the notation for named groups in the BBEdit manual, I ran across this note: 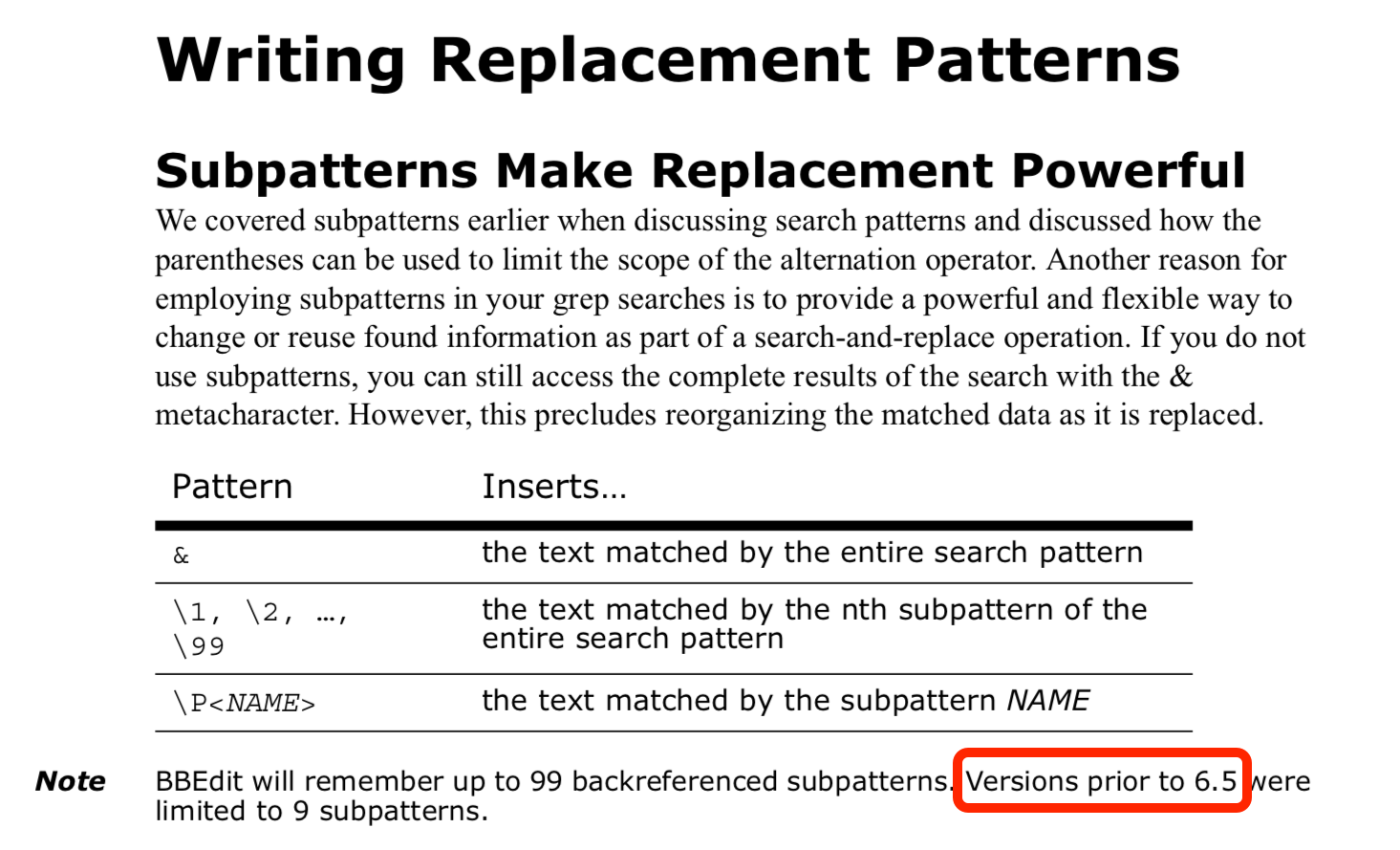 BBEdit is currently on Version 12.5; Version 6.5 came out in 2001. But the manual wants to make sure that long-time customers (I believe it was on Version 4 when I first bought it) don’t get confused by changes in behavior, even when those changes occurred nearly two decades ago.