Embedding JavaScript in Shortcuts with Scriptable

Earlier this week, Scriptable added a feature that makes executing simple JavaScript functions within Shortcuts distinctly easier. I decided to show how it works by writing yet another version of my ROT13 shortcut.

The new action is “Run Inline Script,” and it does pretty much what you’d expect: it allows you to write JavaScript within a Shortcuts action that gets executed by Scriptable. 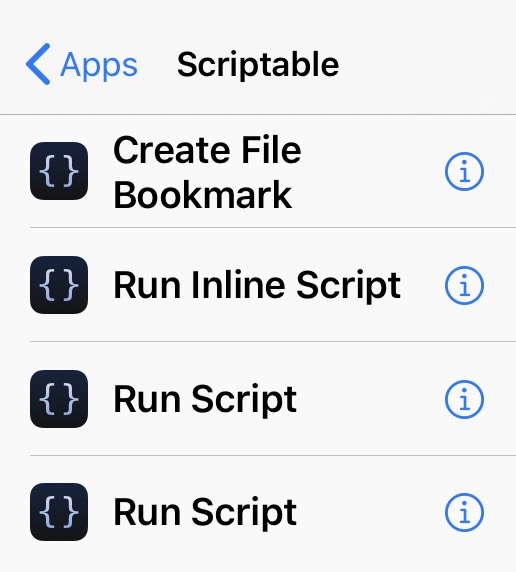 The documentation for the new action (which you can see within Shortcuts by tapping the ⓘ, is this:

Runs a script in Scriptable. The parameter can be accessed using args.shortcutParameter. This parameter can be a text, list, dictionary or a file. When passing a file as input the action will attempt to read the file as JSON or a plain text. If the file cannot be read as JSON or plain text, a path to the file will be passed instead. Use args.plainTexts, args.images, args.urls and args.fileURLs to read the other input parameters. When passing large images and files as input, the script may fail due to memory constraints. In that case you should enable “Run In App”. Use JavaScript’s “return” keyword or Script.setShortcutOutput() to output a value. In case you don’t output a value, add Script.complete() to indicate that your script have finished running.

This is correct, but as we’ll see in a minute, there’s an even easier way to pass information into an inline script.

Here’s my new JavaScript-based ROT13 shortcut, called “ROT13 Scriptable Inline.” If you compare it to what I wrote before, you’ll see that the only change is in Step 10, which is now “Run Inline Script” instead of “Run Script.”

(I’m trying out a new way to describe Shortcuts—a table of the actions with a column of step numbers to the left and a column of commentary to the right. It’s a pain in the ass to make, but I think it gives the reader a better way to understand what’s going on. If people find it useful, I’ll try to figure out a way to automate the creation of the screenshots of the individual actions and their assembly into a table.)

The JavaScript in Step 10, which you can’t see all of in the screenshot, is this:

The ROT13 conversion is done using the same code we used earlier. The difference between this and the standalone script is in the simpler input on Line 10 and output on Line 12.

For input, we don’t have to pass a parameter and use the args.shortcutParameter construct. Instead, we can assign a Shortcuts magic variable directly to a JavaScript variable. This is not mentioned in the documentation we looked at above, but I think it’s easier to understand, and it makes the JavaScript more integrated with Shortcuts. The ❑Text on the right-hand side of Line 10 is my plain text attempt to show the magic variable (which you can see in the screenshot); it’s the one bound to the output text from Step 8.

Similarly, we don’t have to use Script.setShortcutOutput() for output—we can just return the output value and later steps in the shortcut can use it (this is described in the documentation). If you need to return something more complex than a string of text, you can generate JSON by doing something like

and then using the “Get Dictionary from Input” action.

Fundamentally, what Scriptable’s new inline action does is address the problem John Gruber complained about in his tweet:

@jsnell @drdrang @leoncowle This whole thread is fun but it just shows how ridiculous it is that the Shortcuts doesn’t allow, you know, actual scripting. I’m mean it’s ROT13.

If you have Scriptable, you can now do, you know, actual scripting in Shortcuts.