I’ve never thought of myself as particularly good at combinatorics or integer math in general. Most of my formal math study and the math I use in my professional life deals with the full continuity of real numbers, so that’s what I’m best at. But I do enjoy playing around outside my comfort zone.

I recently watched this Numberphile video from a few years ago. It’s about rearranging a set of items, with the goal being to determine the likelihood, after a random shuffle, that none of the items are in their original position.

When James Grime said the probability was 37%, I knew he was really talking about an asymptotic approach to \(1/e\). Not because I’m a math genius, but because I’ve seen that come up many times in dealing with the binomial distribution and its asymptotic movement toward the Poisson distribution as the number of “events” gets large.

The description of why the probability of derangement (a lovely word choice there) tends toward \(1/e\) as the number of shuffled items gets larger is explained, although not fully explained, in the video’s extra footage.

While it’s nice to see the series expansion of \(e^{-1}\), what got me curious was the form of the individual terms of the series. It was the formula

for the alternating terms of the series. While writing out these terms (starting at about 3:30 in the second video), Dr. Grime says “You might have to think about this” and “Have a check about that.” So I did, and now I’m going to inflict my thinking on you.

I generally approach combinatoric problems by enumerating all the possibilities of a small number of items and then looking for the patterns of interest. Here, I started with a set of four cards, labeled A, B, C, and D. If we start with them in that order and shuffle, we could end up with any of the following 24 permutations:

Now let’s try to come up with the individual terms of the series he wrote out in the second video. First, we’ll count up all the examples of where some of the cards are in their right places.

Returning to our table of counts, we can figure out the number of permutations with at least one fixed point:

Therefore, the number of permutations with zero fixed points is

which is what we got by looking through the list directly.

How can we generalize this to any number of cards, \(n\)? The leading term, the one outside the parentheses, is the total number of permutations, so we already know it’s general form: \(n!\).

Now we move on to the permutations for which at least two cards are in their original spots. If there are two cards in their original places, there are \(n - 2\) other cards and \((n - 2)!\) ways to arrange them. And how many ways can 2 cards out of \(n\) be in their right places? It’s the number of combinations of \(n\) items taken 2 at a time. Therefore, the second term inside the parentheses is

At this point, we should step back and realize that our expression for the first term in the parentheses,

could have been written as

The pattern should be clear. Each term for \(k\) fixed points is

and the terms have alternating signs for the reasons given by Dr. Grime in the second video.

Now let’s look again at the leading term outside the parentheses: \(n!\). It may seem silly to do so, but this can be written as

We still haven’t reached the form Dr. Grime showed. For that, we need to expand out the binomial terms and do a little algebra.

The summation part is

which is exactly what the second video shows (at about 4:35). 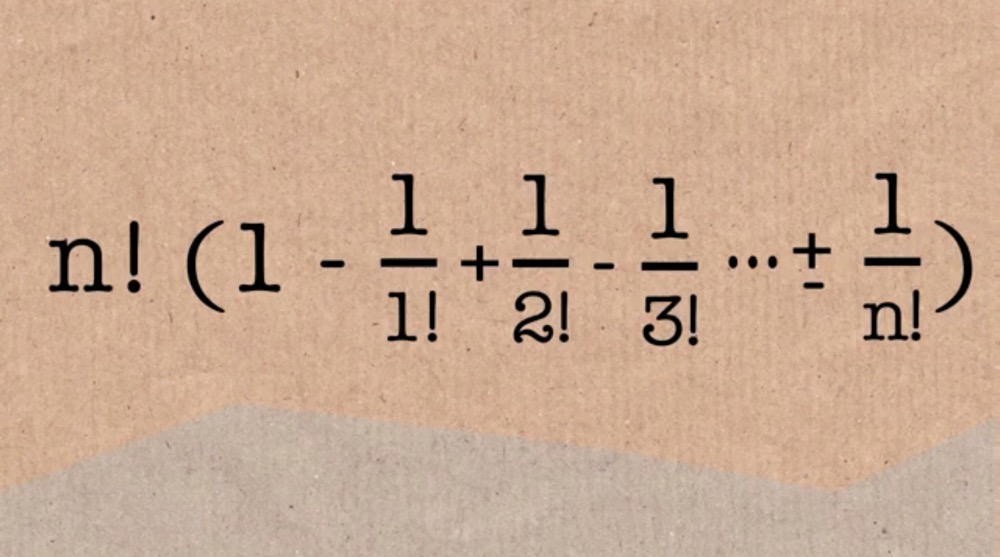 For exactly one fixed point, the number of permutations is

You have the pattern now. For exactly \(m\) fixed points,1 it’s

I’d like to say I worked these formulas out on my own, but I didn’t. I cheated. I do think, though, that I cheated in an interesting way.

I wrote a short, brute force Python program that calculated the number of fixed permutations for \(n\) from 2 to 8 and \(m\) from 2 to \(n\). It used the itertools library to generate all the permutations and looped through them, counting all the occurrences of zero, one, two, three, etc. fixed points. Here they are:2

The nice thing about the OEIS is that it doesn’t just identify the sequences, it also gives you formulas and recurrence relations in several forms, tables, graphs, references, connections to other sequences, and even musical interpretations.

Apart from helping me find the formulas in the OEIS, the table showed a few other things:

I think I’ve mentioned before that my doctor likes his patients to do puzzles and other mental stimulation as they move toward senior citizen status. Whether the “use it or lose it” theory is valid, it can’t hurt. Maybe I’ll show him this post at my next checkup as proof that I’m following doctor’s orders.