Highlighting with Highlights and LiquidText

I decided to get a copy of Highlights after reading this John Voorhees review in MacStories. After trying it out on a few PDF documents that needed to be summarized for my job, I learned that it wasn’t going to work for me. Ironically, it was very bad at highlighting text in the kinds of documents I deal with. But my experiment with Highlights led me to giving LiquidText another try, and with a new perspective on how to use it, LiquidText fits my highlighting needs pretty well.

Highlights is a focused app with a straightforward user interface for highlighting and commenting on text in a PDF, and it can export the highlighted text as plain text.1 It seems like a perfect fit for how I want to work. I subscribed to the Pro version (necessary to get plain text exporting) so I could give it a try.

As luck would have it, I had just finished a couple of projects in which I had done a fair amount of document summarizing. So I put copies of those documents in a new folder and started going through them in Highlights to see how much more effective it would be than my current system.2

On the very first document I tried, Highlights wouldn’t select the text I wanted it to, overselecting in certain areas and underselecting in others. (I can’t show screenshots of it because that would expose the client’s work product.) The trouble seemed to be most commonly associated with footnotes. The selection jumped around in unpredictable ways whenever a footnote or endnote was within the desired selection or nearby.

My history with Microsoft products leads me to believe that this PDF, which I know started its life as a Word document, has a convoluted internal structure, and that may be part of the reason Highlights had so much trouble with it. But I don’t have any control over the history of PDFs I need to summarize, and documents with footnotes that were written in Word make up a large enough percentage of the material I get from clients to make Highlights effectively useless to me. I cancelled my Pro subscription.

Shortly after my Highlights experiment, this thread about PDF note-taking apps appeared on the Mac Power Users forum. It reminded me of that copy of LiquidText I got a long time ago and decided not to use. Maybe it was worth another shot.

The signature feature of LiquidText is the ability to grab excerpts from PDFs and combine them into new documents that show the linkages between different PDFs and different sections of the same PDF. It’s very impressive but struck me as more a presentation tool than a research tool. What I learned from the forum (and some new testing of my own) was that I don’t have to use LiquidText’s cool linking feature; I can just highlight and comment on text as I read along and generate a summary of the highlights and comments when I’m done. And, most important, LiquidText is much better at selecting the text I want than Highlights is. Not perfect—I have found a couple of glitches—but definitely good enough that I expect the average PDF to give me no trouble at all.

After the text is highlighted, in needs to come out, and if you’ve looked through LiquidText’s sharing options, you might think it’s not possible to get a plain text summary out of it. 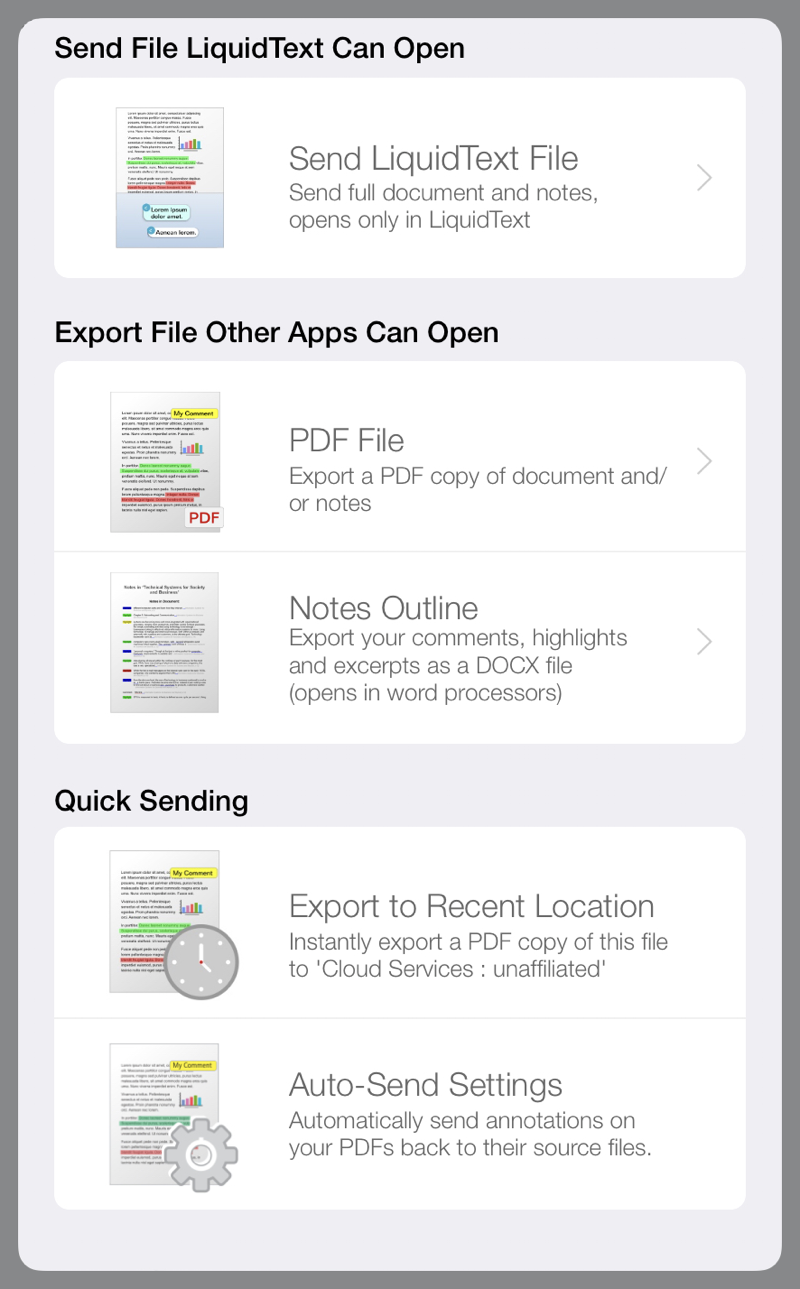 But if you choose the “Notes Outline” option, which is intended to create a Word file, you’ll see another window appear that lets you put the notes onto the clipboard instead of into a DOCX file. 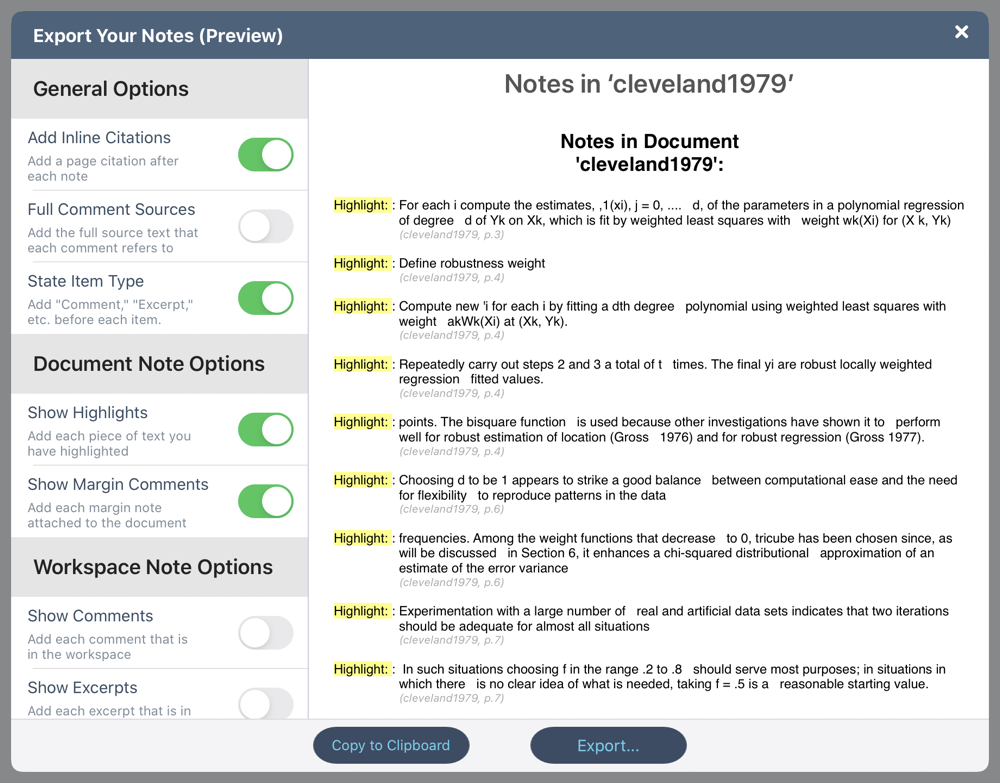 Copying those notes into Drafts makes for a pretty decent summary. 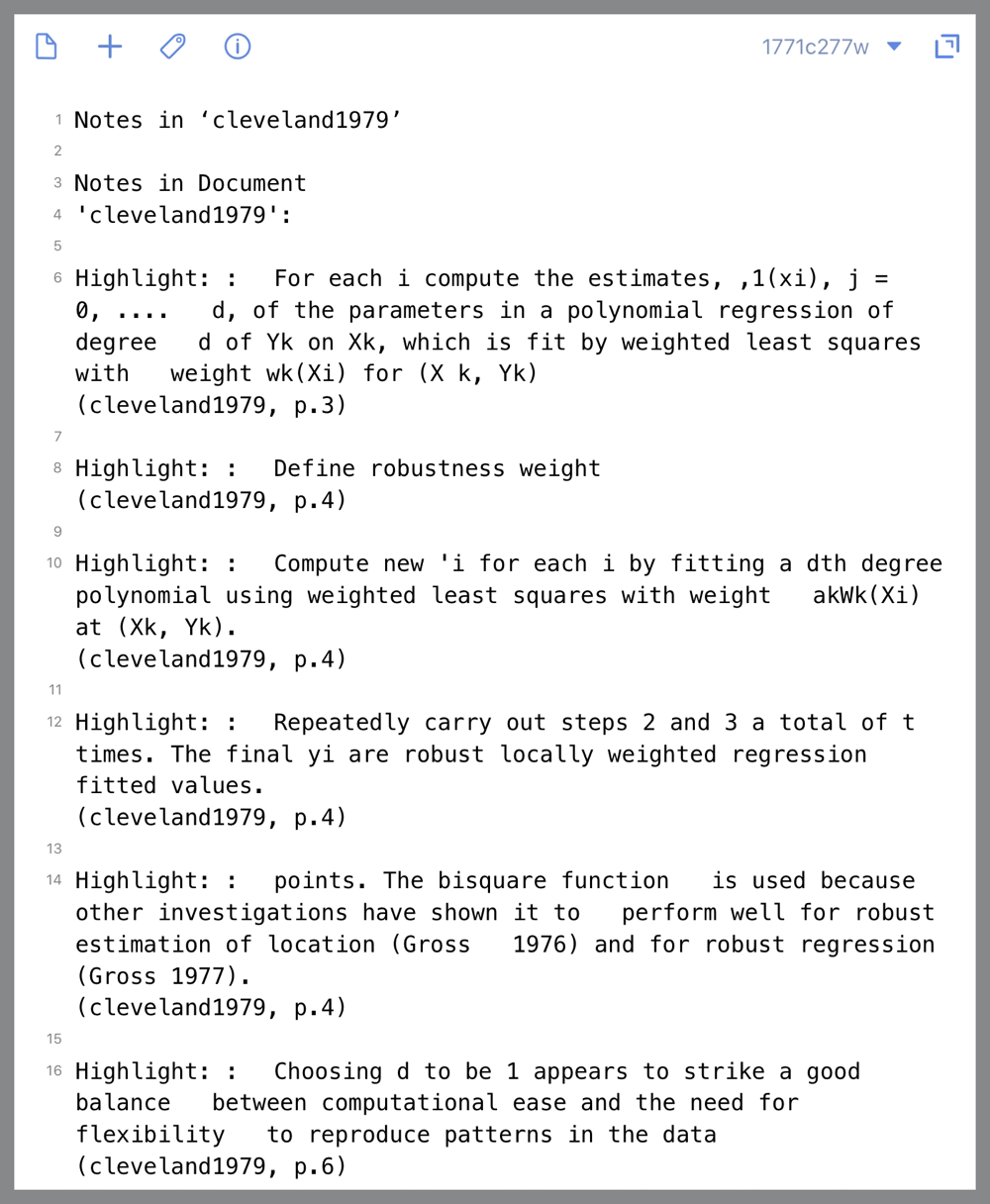 As with the Markdown export from Highlights, I’m not thrilled with the way the notes are formatted, but I’ve written a Drafts action that cleans it up, distinguishing between highlights and comments and getting rid of the extra spaces that often appear in selections from fully justified text. 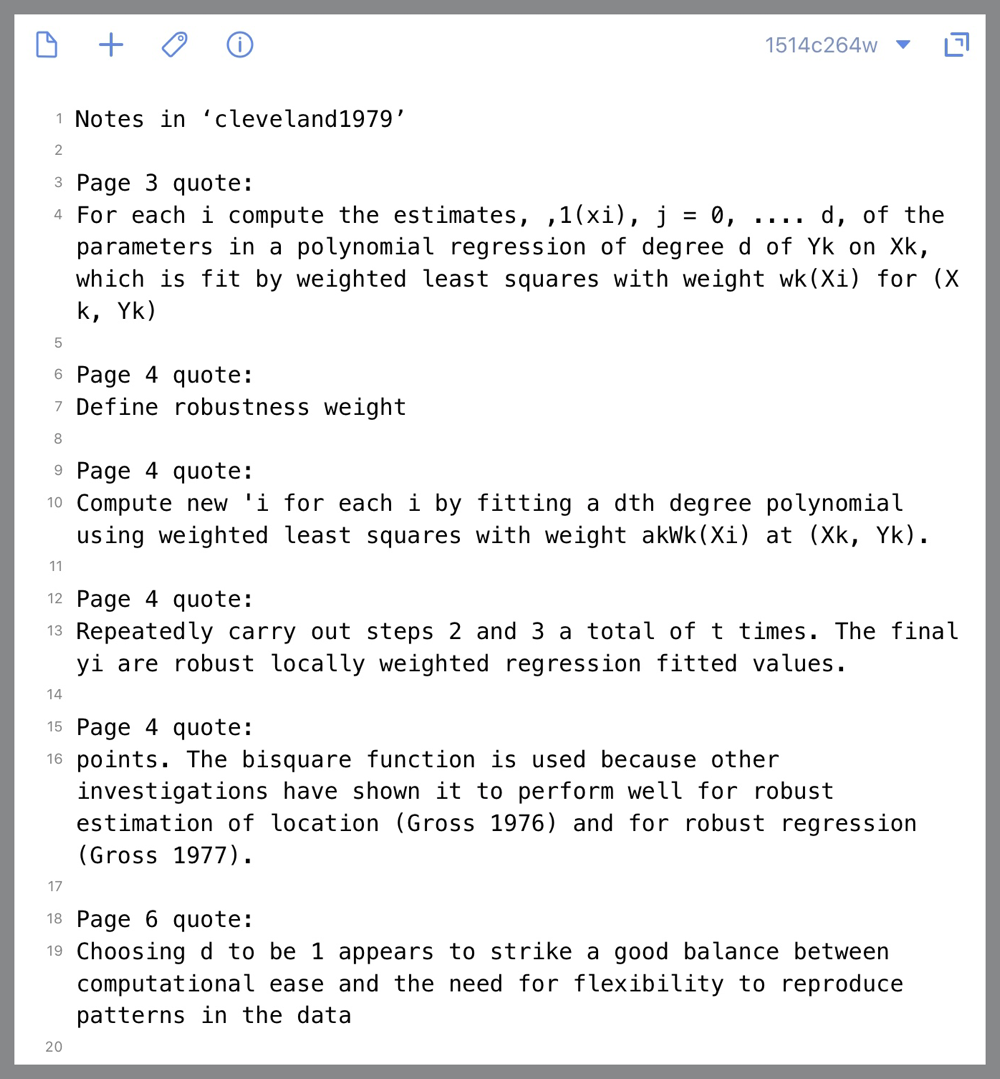 (I should point out that this particular PDF had several equations that I had highlighted. They’re hard to express in plain text and will need to be cleaned up.)

The Drafts action that does the cleanup consists of just one JavaScript step:

A couple of comments on the script:

I don’t expect the summary that comes out of this process to be in final form, but my early experiments have shown that there’s less editing needed in these summaries than in those I dictate.

Overall, I like the experience of summarizing a document with LiquidText. I can still sit with my iPad on my lap, and I prefer swiping with the Pencil to reading text into my phone. In those places where I need to make a comment instead of a highlight, I can still dictate—I just dictate into the iPad instead of my phone. I no longer have to wake up a phone that’s gone to sleep between comments. Unless I run into a showstopper, LiquidText is how I’ll be summarizing from now on.