Myself and a shelf

David Sparks often talks about getting his external SSDs out of the way by velcroing them to the underside of his desk. I like the idea but have always been afraid to try it because, unlike David, I’m still using spinning hard disks for external storage. I worry that the weight and vibration would work them loose eventually.

But this week I got both of my external disks—one for Time Machine and the other for a nightly backup—off the top of my desk and down underneath it. I went with a more prosaic solution: a shelf. 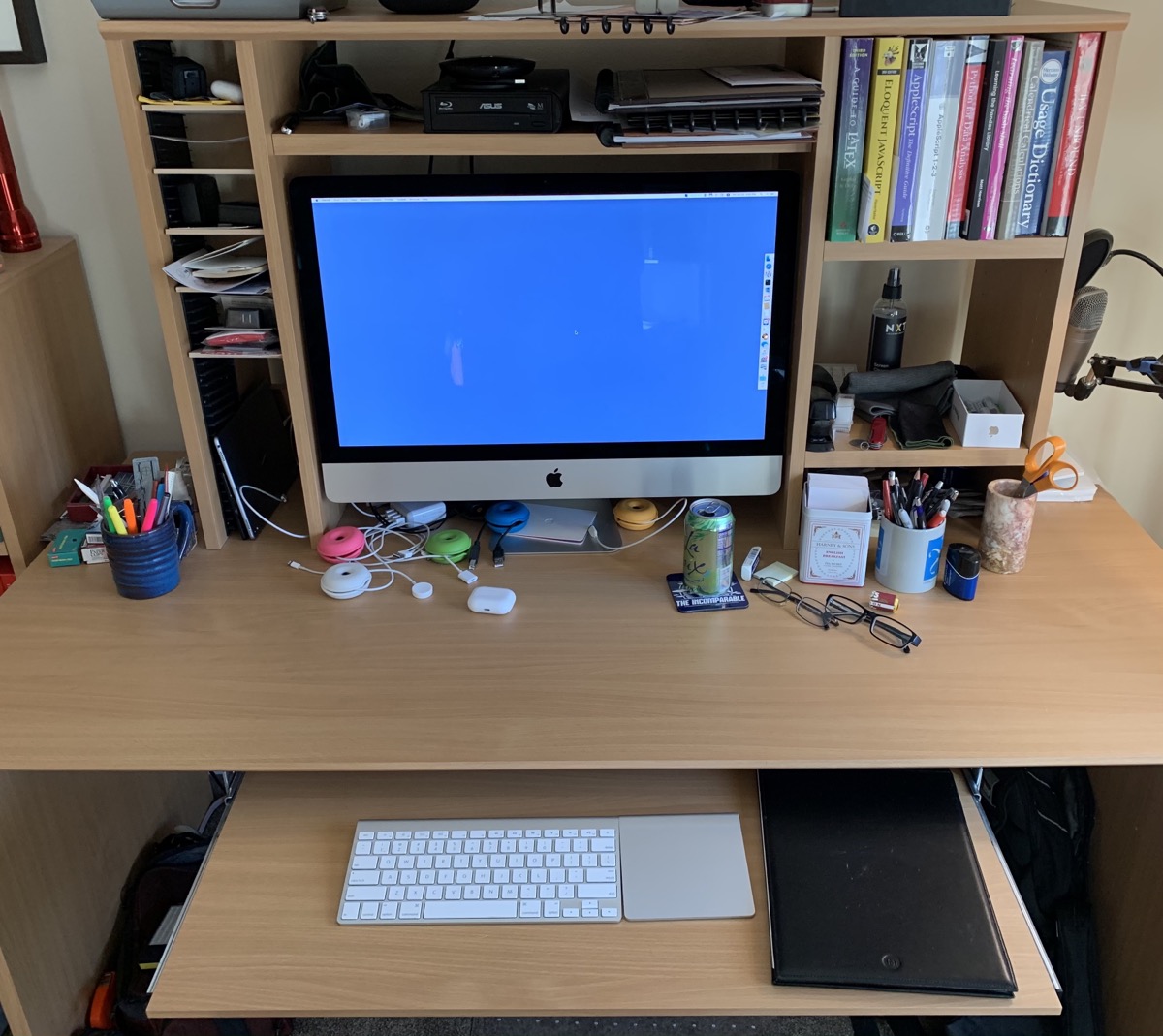 I bought it back in the late 90s when CRTs were still a thing. Amazingly, the center opening of the hutch is just wide enough for a 27″ iMac. Until this week, the hard disks were tucked back behind the Mac. I could sometimes hear the chik-chik-chik when they were reading or writing, and at night I could see the area under the Mac flash when their lights blinked.

I bought this set of shelves from Amazon (yes, that’s an affiliate link) to mount under the desk. There are three coated steel shelves in the set: one 17″ long, one 13″ long, and one 7″ long. They’re all 5″ wide and have a lip along the outstanding edge.

After looking over the possibilities, I decided to mount the 17″ shelf to the far side of the modesty panel that runs from side to side. I crept under the desk on my back and got to work.

First, I stuck a magnetic level to the underside of the shelf and held it up against the modesty panel to mark the holes with a pencil: 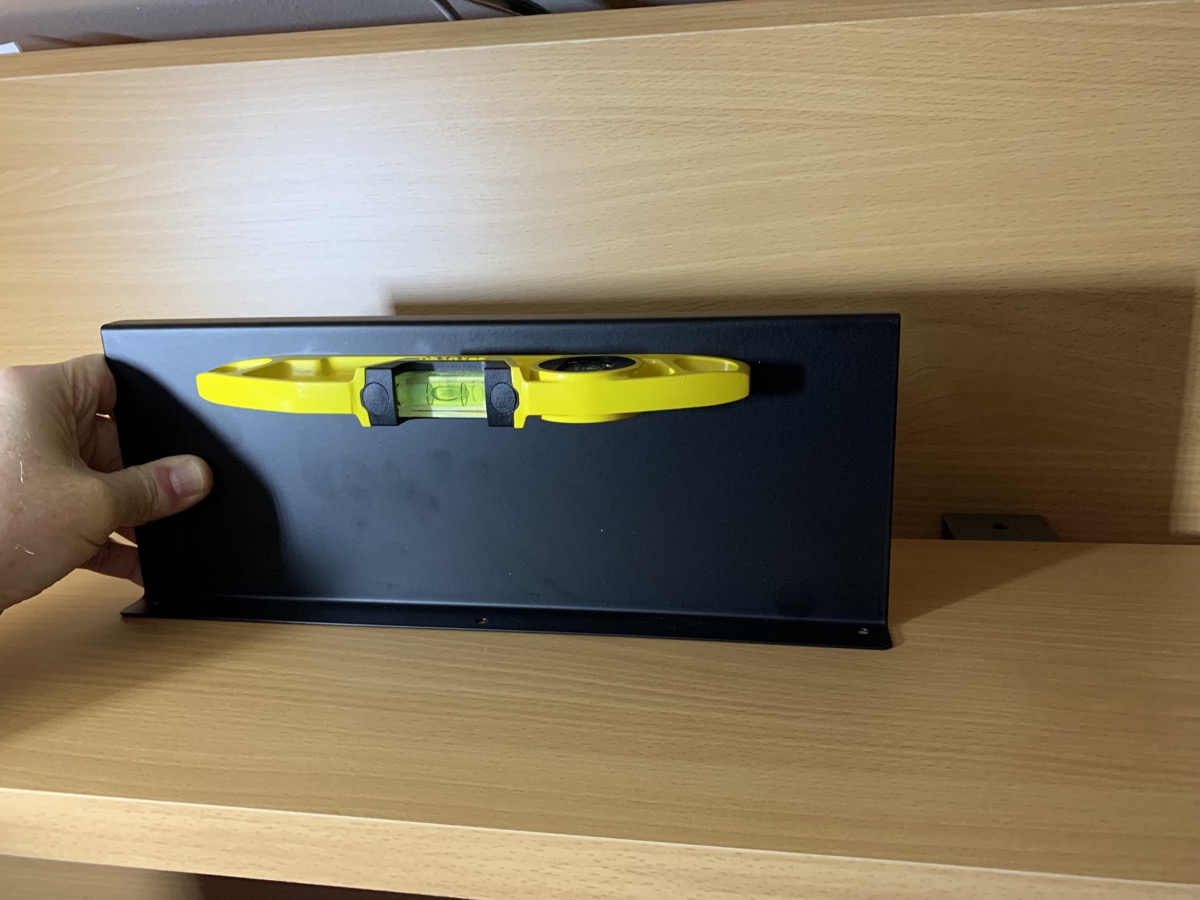 This view is looking up from the floor. My head is basically up against the wall behind the desk. I should also mention that what you see in this photo is the 13″ shelf, even though I wanted to install the 17″ one. I realized I had grabbed the wrong shelf after marking the holes. I hauled myself out from under the desk to get the right shelf and repeated the process but didn’t take new photos.

After using an awl to punch starter divots into the panel at the pencil marks, I drilled pilot holes for the mounting screws. I was worried the drill wouldn’t fit between the panel and the wall, but it did. Like the iMac in the hutch, it had a fraction of an inch to spare. 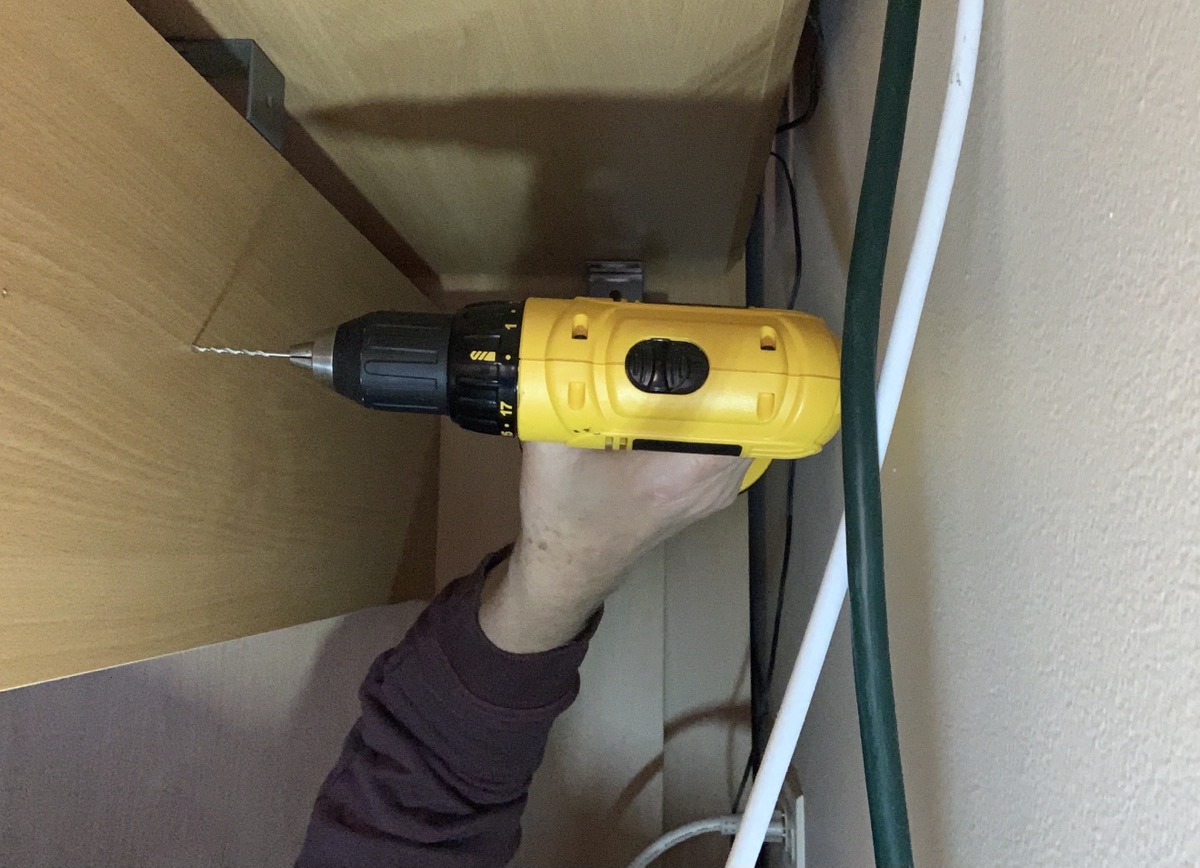 I like to think I held the drill more square to the panel when I wasn’t using one hand to take a photo. I had just enough foresight to shift my head off to the side before drilling so the sawdust didn’t fall into my eyes and mouth.

After installing the shelf with three screws, I rechecked the level and was pleasantly surprised. 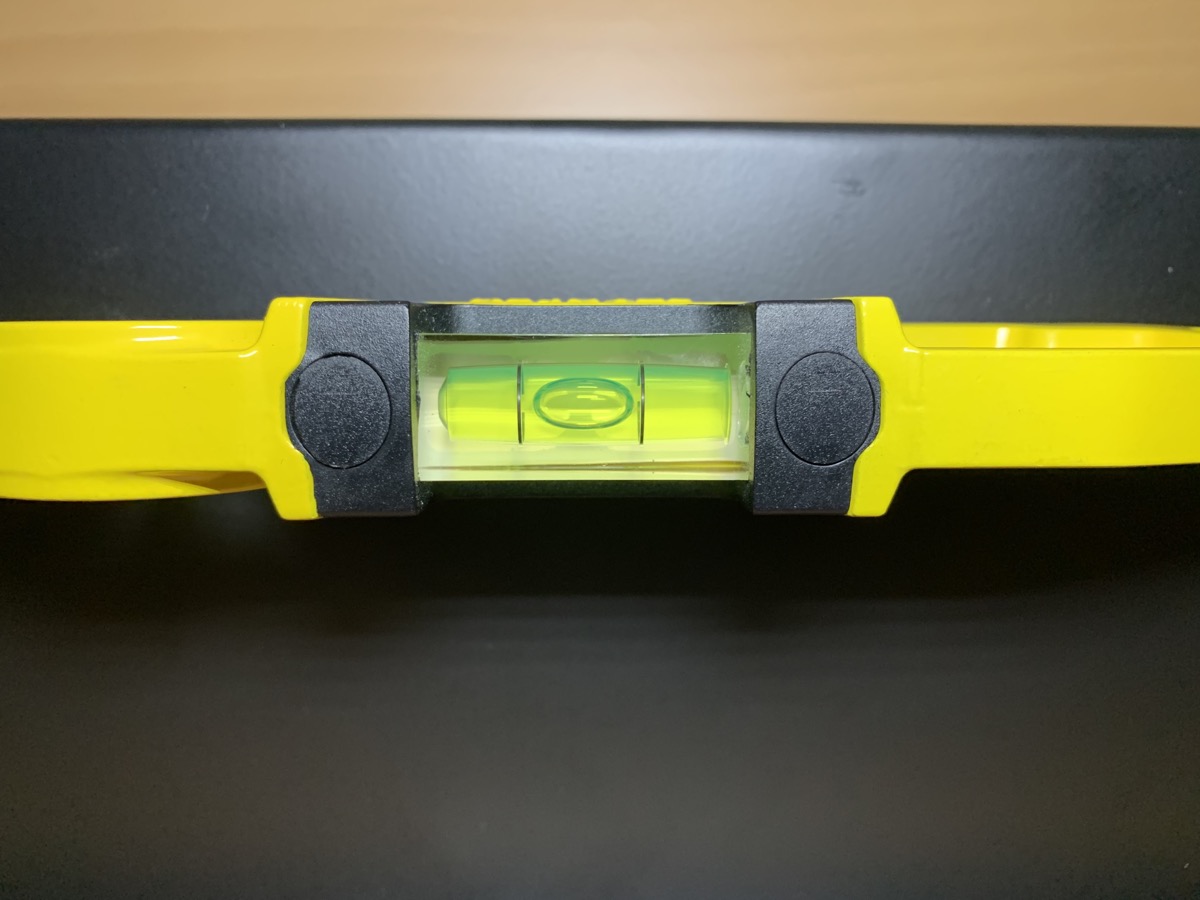 I unmounted the hard disks, rerouted the cables, and set them up on the shelf. If the shelf had been too narrow for the larger disk (it wasn’t supposed to be, but who knows how accurate an unknown vendor’s reported dimensions are?), I could have flipped it on its side. 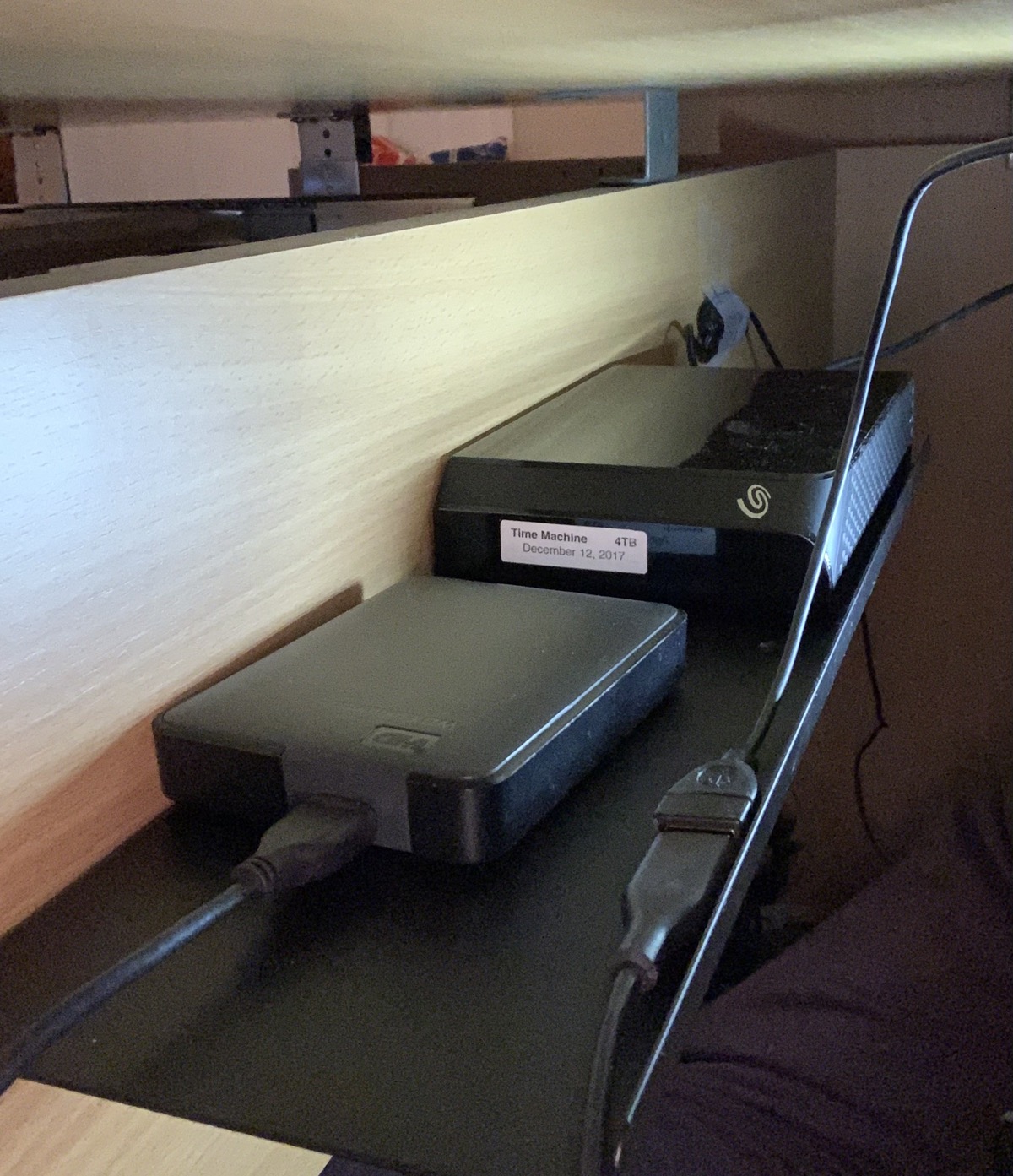 The disks have never been loud, but now that they’re under the desk and on the other side of the modesty panel, I don’t hear them at all. And their blinking lights are well out of my sight.

I haven’t decided what to do with the other two shelves. There’s more room on the modesty panel if I need more hidden space. I could also put them on the side panels for things that need to be handy. The one thing I don’t like about this desk is its lack of drawers.

The $18 I spent on the shelves is undoubtedly more than David spent on his velcro, but peace of mind is worth something.

Update Jan 24, 2021 9:29 PM
This evening Counselor Sparks objected to my mischaracterization of his previous testimony. He claims that he is not made of money and that his Time Machine and archival drives are spinning disks, not SSDs. He further claims that the disks he has velcro’d to his desk are small, bus-powered drives (like the one in the foreground of my last photo). He has never tried to velcro a large external hard drive (like the one in the background of my last photo) to his desk because he is not an idiot. Objection sustained.