Comparing lists is something I have to fairly often in my work. There are lots of ways to do it, and the techniques I’ve used have evolved considerably over the years. This post is about where I’ve been and where I am now.

First, let’s talk about the kinds of lists I deal with. They are typically sets of alphanumeric strings—serial numbers of products would be a good example. The reason I have two lists that need to be compared varies, but a common example would be one list of devices that were supposed to be collected from inventory and tested and another list of devices that actually were tested. This latter list is usually part of a larger data set that includes the test results. Before I get into analyzing the test results, I have to see whether all the devices from the first list were tested and whether some of the devices that were tested weren’t on the first list.

In the old days, the lists came on paper, and the comparison consisted of me sitting at my desk with a highlighter pen, marking off the items in each list as I found them. This is still a pretty good way of doing things when the lists are small. By having your eyes go over every item in each list, you get a good sense of the data you’ll be dealing with later.

But when the lists come to me in electronic form, the “by hand” method is less appealing, especially when the lists are dozens or hundreds of items long. This is where software tools come into play.

The first step is data cleaning, a topic I don’t want to get into in this post other than to say that the goal is to get two files, which we’ll call listA.txt and listB.txt. Each file has one item per line. How you get the lists into this state depends on the form they took when you received them, but it typically involves copying, pasting, searching, and replacing. This is where you develop your strongest love/hate relationships with spreadsheets and regular expressions.

Let’s say these are the contents of your two files: three-digit serial numbers. I’m showing them in parallel to save space in the post, but they are two separate files

You’ll note that neither of these lists are sorted. Or at least they’re not sorted in any obvious way. They may be sorted by the date on which the device was tested, and that might be important in your later analysis, so it’s a good idea, as you go through the data cleanup, to preserve the ordering of the data as you received it.

At this stage, I typically look at each list separately and see if there’s anything weird about it. One of the most common weirdnesses is duplication, which can be found through this simple pipeline:

The result for our data is

What this tells us is that item 114 is in list B three times, item 105 is in list B twice, and all the others are there just once. At this point, some investigation is needed. Were there actually three tests run on item 114? Did someone mistype the serial number? Was the data I was given concatenated from several redundant sources and not cleaned up before sending it to me?

The workings of the pipeline are pretty simple. The first sort alphabetizes the list, which puts all the duplicate lines adjacent to one another. The uniq command prints the list without the repeated lines, and its -c (“count”) option adds a prefix of the number times each line appears. The second sort sorts this augmented list in reverse (-r) order, so the lines that are repeated appear at the top. Finally, the head prints just the top ten lines of this last sorted list. Although head can be given an option that changes the number of lines that are printed, I seldom need to use that option, as my lists tend to have only a handful of duplicates at most.

Let’s say we’ve figured why list B had those duplicates. And we also learned that list A has no duplicates. Now it’s time to compare the two lists. I used to do this by making sorted versions of each list,

and then compared the -sorted files.1 This worked, but it led to cluttered folders with files that were only used once. More recently, I’ve avoided the clutter by using process substitution, a feature of the bash shell (and zsh) that’s kind of like a pipeline but can be used when you need files instead of a stream of data. We’ll see how this works later.

There are two main ways to compare files in Unix: diff and comm. diff is the more programmery way of comparison. It tells you not only what the differences are between the files, but also how to edit one file to make it the same as the other. That’s useful, and we certainly could use diff to do our comparison, but it’s both more verbose and more cryptic than we need.

(The columns are separated by tab characters, but I’ve converted them to spaces here to make the output look more like what you’d see in the Terminal.)

You can suppress the printing of the other columns with -1 and -2. So to get the items that are unique to list A, we do

There are a couple of things I hate about comm:

I said earlier that I don’t like making -sorted files. Now that we see how comm works with files, we’ll switch to process substitution. Here’s how to get the items unique to each list without creating sorted files first:

What goes inside the <() construct is the command we’d use to create the sorted file. I like this syntax, as the less-than symbol is reminiscent of the symbol used for redirecting input. 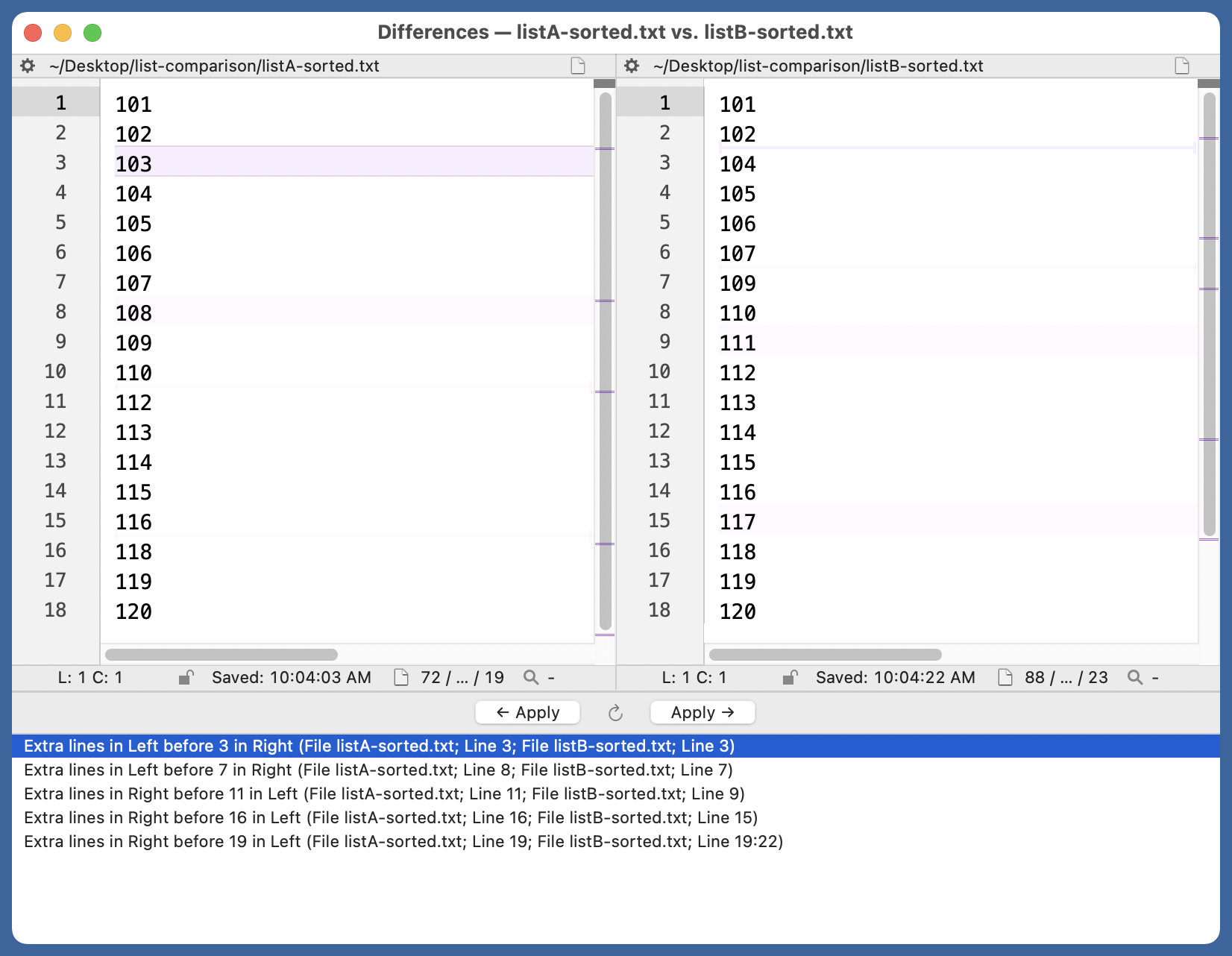 Here’s Kaleidoscope, which gets good reviews as a file comparison tool. I don’t own it but downloaded the free trial so I could get this screenshot. 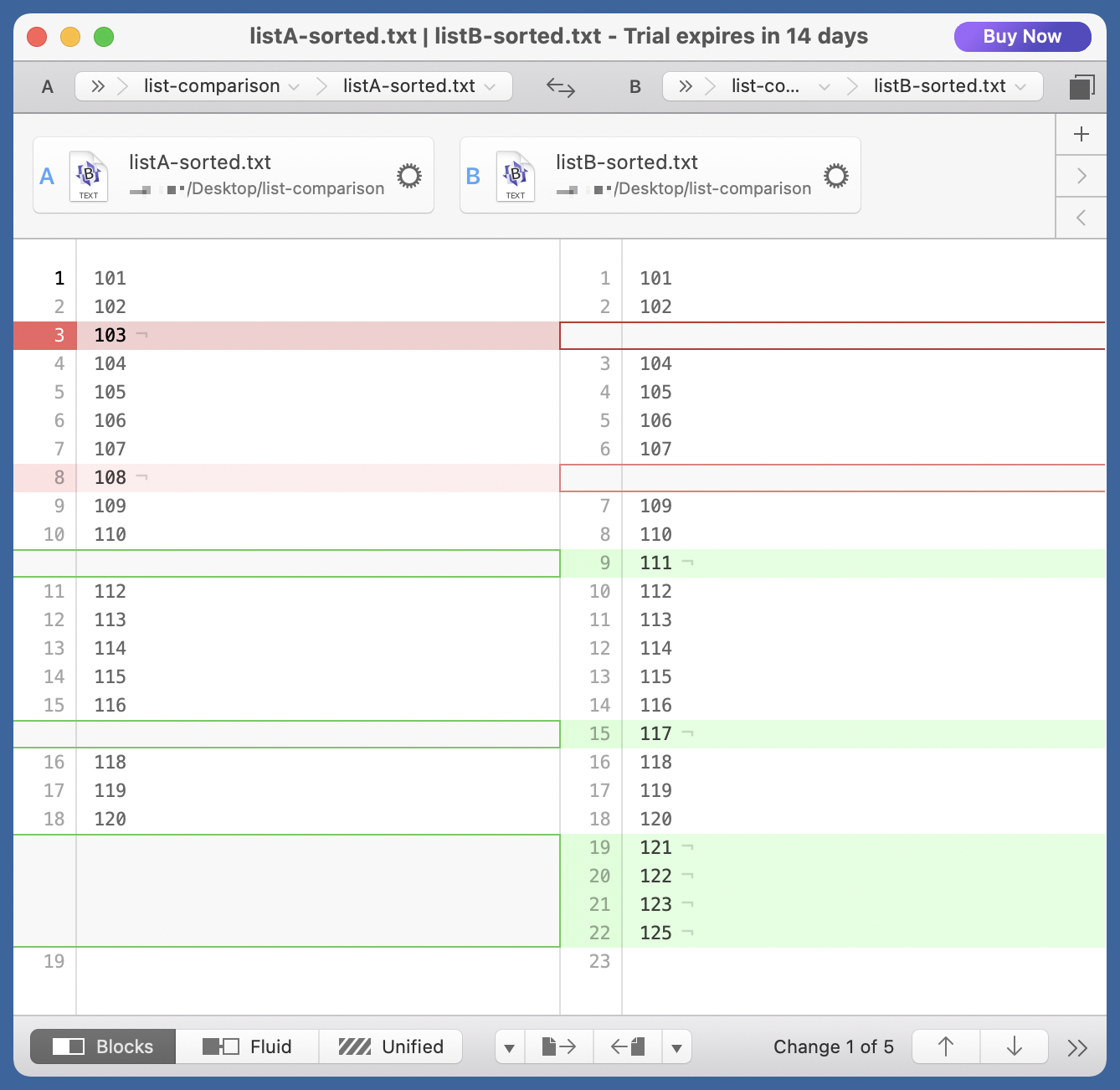 These are both nice, but they don’t give you output you can paste directly into a report or email.

The following items were supposed to be tested, but there are no results for them:
[paste]
What happened?

Update 08/31/2021 6:05 PM
Reader Geoff Tench emailed to tell me that comm is short for common, and he pointed to the first line of the man page:

This is what you see when you type man comm in the Terminal. The online man page I linked to, at ss64.com, is slightly different:

I focused on the compare and missed the common completely.

diff is such a good command name, I often use it by mistake when I really mean to use comm. Now that I’ve written this exegesis of comm, I’ll probably find it easier to remember. Thanks, Geoff!