No reason to get excited

Last week’s Apple Event didn’t give me the push to get a new watch that I was expecting. Yes, my Series 3 won’t accept watchOS 9, but I’ve known that since WWDC. And while both the SE and the Series 8 are clear improvements over the Series 3, I’m not sure what I will get out of them. As I’ve mentioned before, my 3’s response to taps and swipes has become sluggish since the upgrade to watchOS 8, but it still tracks my daily movements and handles my notifications well. Will I get $250 or $400 of value out of a new model? If battery life were a problem, the answer would be yes, but I still get a full day’s use on a charge.

One thing that might have put me on the upgrade path happened last Tuesday morning as I was preparing for a business trip. I wanted to switch out my colorful orange and blue1 bands for a more staid black set. But I couldn’t slide the blue one out of the watch—the release button wouldn’t push in.

When I got back from the trip, I went to my local Apple Store and was handed off to a technician. She told me she’d have no trouble removing the band, but it was unlikely to survive the process. I said that was fine, as I’d already started a small tear on the stubborn band when I tried to remove it on Tuesday.

Also, this is not a special orange-and-blue band—it’s one half of an orange band and the other half of a blue band. I bought the two cheap third-party bands shortly after getting the watch, and I still have the other two halves. I hadn’t expected them to last this long.

After 5–10 minutes, the tech came out from the back room with my pieces. as expected, the release button on the watch was fine; it was the lugs on the band that had crapped out. Common in third-party bands, she said. Which I’m sure is true, but I spent a total of $18 on two bands over four years ago, and I still have, in practical terms, one band left. Hard to argue with that kind of value.

After putting on the new/old straps, I noticed that I had the orientation of the broken piece wrong in the photo above. I was too lazy to remove the new straps and reshoot the photo, but I did reorient the broken piece and push it together with its mate for a closeup photo. You can see how the spring-loaded button in the center came apart. 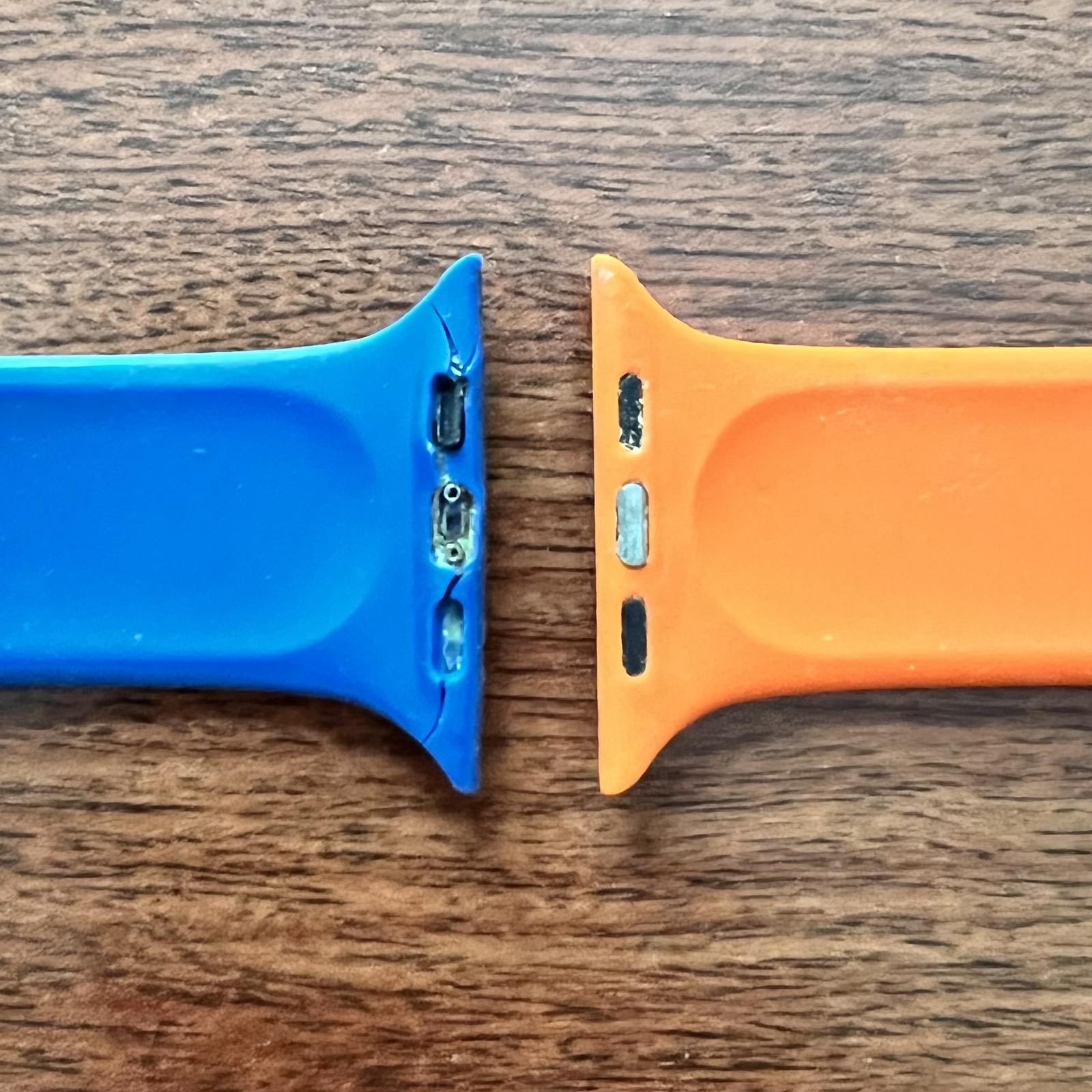 A Series 3 that was stuck with one (slightly torn) band might have induced me to get a new watch. Now that it’s back to full functionality, I’ll have to think harder. I’m not sure what any of it is worth.