Bob LeVitus is an idiot

Del.icio.us/popular had a couple of links today that bothered me.

The first, which was also mentioned on Lifehacker, is Bob LeVitus’s MacObserver article/ebook about backing up your Mac. While I certainly recognize the need for new computer users to learn the basics of backups, del.icio.us and Lifehacker are sites for relatively sophisticated users and LeVitus’s article was anything but sophisticated.

I guess what bothered me about the article is what bothers me about most computer magazine articles: the advice almost always boils down to “Go out and buy this or that program.” Yes, the commercial software industry has a right to exist, and yes, the commercial software industry keeps computer magazines in business. But telling your readers to go buy something is not really teaching them anything. And it doesn’t make you an expert in anything.

Worse, LeVitus (who calls himself “Dr. Mac”) didn’t mention rsync, the backup program that handles countless mirror sites on the web and that Apple includes in the bundle of software that comes with the Mac. Rsync is free, reliable, industrial strength, and easy to automate. It’s also a command-line program, which may be why LeVitus didn’t include it.

There’s a tendency among Mac writers to avoid the command line completely or apologize profusely for every mention of Terminal.app. I suppose this is because they believe their audience won’t accept command line solutions. (Talking Barbie says, “The command line is hard!”) So they write long articles with many screenshots and convoluted descriptions of mouse gymnastics that accomplish no more than a few simple commands. Here’s Dr. Drang’s replacement for much of Dr. Mac’s article:

The first time you use it, this will copy everything from the source to the destination, keeping the directory structure, ownership, and permissions intact (that’s the “a” part). It will also compress the files before transmitting them, saving bandwidth, and decompress them at the destination (that’s what the “z” does). And it will show you a running list of every file as it’s being transferred (which is what the “v” does). Here’s the beauty part: every subsequent time you use this command, only the files that have changed since the previous backup will be copied. The source and destination can be on the same computer—in which case, the “z” option is probably unnecessary—or on opposite sides of the world.

If you want your backup to happen automatically, you need to invoke rsync via cron or launchd. I think cron is easier, I have a crontab file that looks like

which does its backup a 10:00 pm (22:00 in a 24-hour clock) every day. Boy, that’s complicated! I’m sure most Mac users are just too stupid to type in one entire line of text. In fact, I can hear my IQ dropping as I sit here in front of my iBook (it sounds like the whistling of bombs dropping in a war movie).

The other stupid link on del.icio.us/popular today was a gallery of scanning electron microscope (SEM) photographs posted by an Iowa State University laboratory. I can’t imagine why anyone would want to look at these photos. There were no explanations accompanying the images, so if you’re not familiar with the subject matter you have no idea what you’re looking at. And if you do know what you’re looking at, the images are small, undetailed, and pedestrian.

Good SEM images are plentiful. From my own modest collection, here’s the fracture surface of a broken steel piece. The piece broke in fatigue, which means that it was bent, unbent, bent, unbent, again and again until it broke. The light horizontal lines mark the advance of a crack through the part with each bend. Failure analysts study images like this to determine how and why things fail. 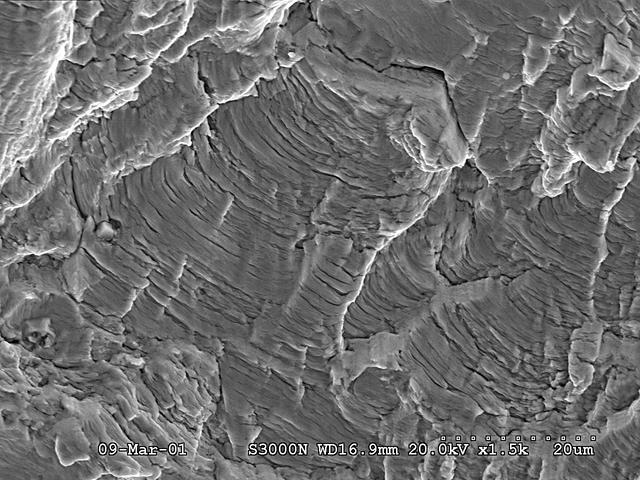 Here’s a bandage, with a mesh covering the fibrous gauze. I’m not sure what this image is good for, but I think it looks cool. 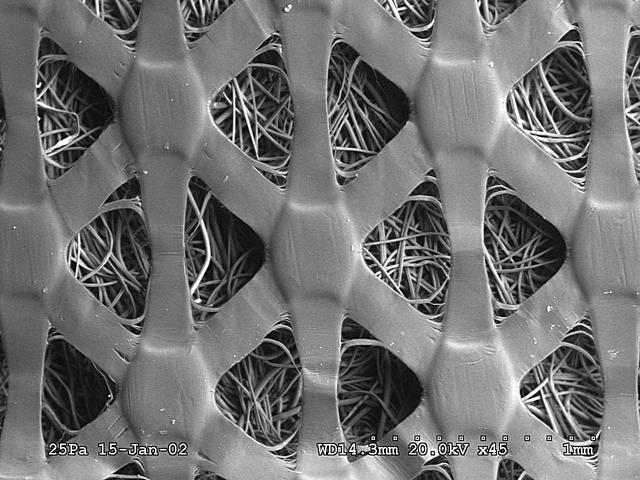