Last month I wrote an informal review of my Shure e2c earphones. I still like them, but the extra-long cord is bugging me more now than it did a few weeks ago. Here’s what I said then:

The cord on the Shure is distinctly longer than the cords on either of the Apple-branded earphones. Whether this is good or bad depends on where and how you carry your iPod. I always wear my iPod clipped to a pants pocket. When I’m walking around, the Shure is maybe a bit too long, but gives me the freedom to turn my head and twist my upper body without pulling out an earphone, something that happened frequently with my Apple earphones. On the other hand, when I’m riding my bicycle, the extra length of the Shure cord can sneak out and get caught around my knee while I’m pedaling. Tucking a few inches of the cord behind the iPod’s clip solves this. On balance, the longer cord works better.

Well, the balance has shifted. I’ve spent a lot more time now using the Shures while riding my bike and sitting on airplanes, and the extra length—about 16 inches—has become a real nuisance, constantly getting caught on my knee or tangled in whatever reading/writing material I’m juggling on the plane.

Today I decided to (temporarily and reversibly) shorten the cord to standard Apple length. A comment on this nifty post at Lifehacker mentions using a series of crochet knots to shorten the cord, but that seems a bit too temporary. I folded the cord back on itself twice and held the loops in place with four cable ties as shown here:

I’ve put an Apple cord in picture so you can see how much thicker the Shure cord is. And I threw in my index card ruler for scale. (You can click on the picture to see a bigger version.)

It worked pretty well while doing some yard work today, but I suspect I’ll be doing some tweaking as I live with it. For example, the folded-back part is pretty stiff, and I’m already thinking that I should have put that just below the Y-split instead of near the plug. We’ll see.

One advantage of the Apple cord is how neatly it can be stowed using the figure-8 loop described in the aforementioned Lifehacker post. Here’s a comparison of the Apple and Shure cords when wrapped up: 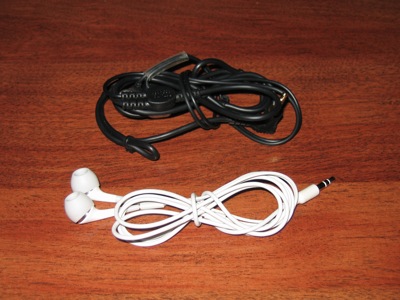 This picture is a bit unfair to the Shure because it has that stiff folded-back section in it, but it never wrapped up neatly even before I shortened it.