Yesterday I tried to pair my Motorola RAZR phone and H700 headset. Eventually I succeeded, but the many failures that came first were very frustrating. I figured it was worth describing the success so others could avoid the frustration.

First, a bit of background. I bought the phone and headset together this past summer, and they’ve worked well together. I have no memory of pairing the two, so I suspect the salesman did it for me before I left the store. After a couple of months, dust began to collect between the phone’s LCD screen and the lens that covers it. It started as a few specks but grew into a splotch that began to interfere with my reading of the screen. I asked for and got a replacement phone under warranty, which arrived about a week ago. I synced its phone book and calendar with Address Book and iCal and reloaded my ringtones and wallpaper but forgot to pair it with the headset. Then I went off on a business trip.

During a short layover in Salt Lake City, I wanted to use the headset while calling my voicemail so I’d have both hands free to take notes as I listened to my messages—one hand for writing, the other for steadying my HPDA on my knee. At first I couldn’t understand why I wasn’t hearing anything through the headset, but eventually I remembered that I was using a phone that had never been paired with it. I went through the phone’s menu system to initiate the pairing, but after several tries I still couldn’t get them to pair (I could have paired the phone with a nearby Pocket PC, but wasn’t interested). So I just used the phone by itself and my notes came out a bit shaky.

That night, I got on the web and searched for a solution. I found a PDF file with instructions (source of the image below) and an interactive tutorial, both from Motorola. They both say that the H700 will go into pairing mode a few seconds after its turned on, as long as there are no devices around to which it has already been paired. And you’ll know it’s in pairing mode when the slowing flashing blue light on the side of the headset turns into a steady purple light. 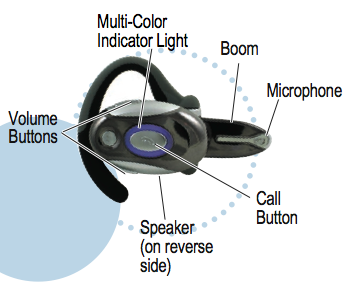 Well, there were no devices in my hotel room to which the H700 had been paired (I’d never paired it with my iBook, and besides, the iBook’s Bluetooth was turned off), but its flashing blue light never turned to purple and the RAZR never found it. By accident, I learned I could get the purple light to turn on briefly by pushing the Call button when the head set was off, that is, when the boom is folded up. This didn’t put the H700 in pairing mode, but it suggested that the Call button had to be part of the pairing procedure. After a bit of experimenting, I came up with this:

Procedure for pairing an H700 headset with a RAZR

With these three steps, the indicator light will stay purple and the headset will be in pairing mode. You can now go to the RAZR, push the menu button at the top center and work your way through

The phone should find the headset, ask if you want to pair with it, and ask for a passkey. The passkey for the H700 is 0000. Enter it and you’ll be on your way.