A couple of days ago I saw this poster of time traveler hints via a tweet by @gnomedad. It’s cute, but

Anyway, there was one thing on the poster I found interesting.

The exact speed of light in a vacuum is 299,792,458 meters per second. Good to know. A meter is defined in terms of light, but if you can’t measure it accurately, the length of a pendulum that takes one second to swing from end to end will do the trick.

Let’s ignore the odd notion that you’re going to be able to use the speed of light to lay out a line one meter long (no problem, just invent a clock accurate to \(10^{-9}\) seconds), and focus on that thing about the pendulum. Why would a one-meter pendulum take exactly one second to swing from side to side? I’ve analyzed the behavior of pendulums as both a student and a teacher, and I don’t ever remember running across that fact. But it’s fairly easy to derive from first principles, and since I’m not teaching anymore, I’ll inflict the derivation on you.

Here’s a simple pendulum consisting of a small ball of mass \(m\) hanging from a pivot point by a string of length \(L\). 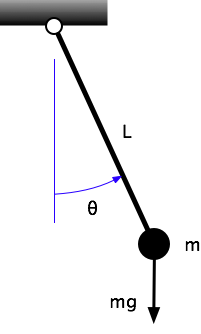 The reaction force at the pivot doesn’t generate a moment about the pivot because its lever arm is zero. Therefore, the only force that contributes to \(\sum M_O\) is the weight of the pendulum, \(mg\), where \(g\) is the acceleration due to gravity. Its lever arm is \(L \sin \theta\), so

where the negative sign indicates that the moment is in the opposite direction of \(\theta\). Canceling the common terms and rearranging, we get

This is a rather nasty differential equation because of the sine term. If we assume the swing angle stays relatively small throughout the motion, we can make the further simplification, \(\sin \theta \approx \theta\). How good is this approximation? It’s easy to make up a little table and check.

The small angle approximation leads to

This is a second order linear differential equation with constant coefficients, which is, as these things go, quite easy to solve. The solution will have the form

where \(\omega = \sqrt{g/L}\) is the the circular frequency of the oscillation, and \(A\) and \(B\) depend on the initial conditions, the angle and angular velocity of the pendulum at time zero. For a pendulum pulled to the side and released from rest, the solution takes the form

with \(A\) being the amplitude of the oscillation, the largest value of the swing angle. The periodic motion of the pendulum—left to right to left to right, and so on—is reflected in the periodic nature of the cosine function. 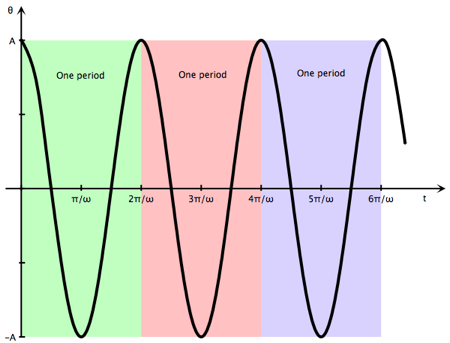 In our solution, the pendulum never slows down or stops because we haven’t modeled air resistance or friction at the pivot.

So the time it takes to swing from one side to the other is half that:

I think it’s fair to say that we can ignore the 3 millisecond difference and declare that a 1-meter pendulum has a half-period of 1 second.

This nice result comes about because the gravitational acceleration on the surface of the Earth in \(m/s^2\) is just about equal to \(\pi^2\). In fact, there was a time when the meter was going to be defined in terms of this pendulum length, but that definition lost out to the meridonal definition.

Pi is a universal constant because it’s based on mathematics alone, but \(g\) isn’t; so if your time machine also transports you to another planet, don’t expect this trick to work.