Today I downloaded and installed Python 3.1 from python.org and found that I had to do a bit of extra setup to get a third-party library working.

Python 3.1 for the Mac comes as a .dmg file which, when mounted, has a rather spartan set of contents. 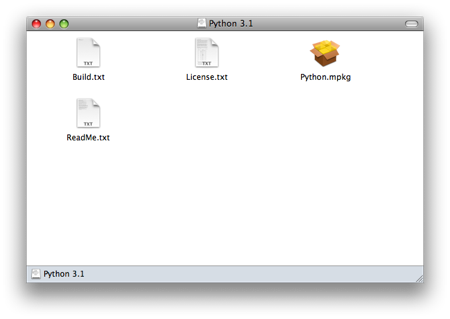 Running the installer and accepting its defaults1, creates and fills a new 3.1 subdirectory in /Library/Frameworks/Python.framework/Versions and puts a python3 command in /usr/local/bin. Everything associated with Python 3.1 is distinct from the standard Python 2.5 that ships with Leopard. The python command still starts up version 2.5

and the python3 command starts up Python 3.1

I suspect that running python3 setup.py on a module packaged with Python’s distutils will create the 3.1/site-packages tree, but the first module I wanted to install was Stuart Colville’s titlecase, which just comes as a single Python source file to be moved somewhere where Python can find it.

[Aside: I had some hope that the title() method for strings in Python 3.1 would have been improved with regard to apostrophes. It doesn’t seem too much to ask that

instead of the nonsensical

Sadly, 3.1 is just as stupid as 2.5. The titlecase module is much smarter, and even knows to keep small words like articles and (most) prepositions uncapitalized unless they’re the first or last word of the title. It’s based on a Perl script by John Gruber described in this blog post.]

It turns out that simply creating a 3.1/site-packages tree in /Library/Python is sufficient to add it to Python 3.1’s module search path. Here are the commands to run:

The -p switch tells mkdir to create all the necessary intermediate directories. They’ll have an owner of root and a group of admin. The chmod command allows all users in the admin group—which includes my usual login user account—to add files to the new directories. Without this, the .pyc bytecode files can’t be made, and the modules will have to be compiled from source every time they’re imported.

One more thing: the titlecase module was written for Python 2.x; it needs one change to make it 3.1-compatible. Change Line 249 in titlecase.py from

before you install it.

I do wish Python, like Ruby, allowed base classes to be extended—titlecase would be more natural as a string method than a function.