Let’s start with the apology. Earlier this week, RSS subscribers got repeated notices of the daily roundup of my Twitter updates. These posts are generated automatically overnight; because of a screwup on my part, two posts were being made each day and the feeds followed suit. I’m sorry about that. It took me a couple of days to figure out what was wrong, but it seems to be fixed now.

The screwup came as I was trying to make the twitterpost script more robust. When it’s working, twitterpost

I have a launchd process set up to run twitterpost in the middle of the night to automatically generate a blog post of my deathless thoughts. But it had stopped working well.

You may recall that at the beginning of the month Twitter was quite unreliable—more so than usual. For several days in a row, twitterpost had been unable to connect when it ran, so it would just fail, and there’d be no automatic posting for that day. I’d have to run the script by hand when Twitter was responsive. To fix this problem, I rewrote twitterpost to check whether the connection was successful and try again several minutes later if it wasn’t. Here’s the new source code:

I tested the new twitterpost by running it with my network cable initially disconnected (Twitter wouldn’t oblige me by being down during testing). After a few loops, I’d reconnect the cable and the rest of the script would execute. It seemed to be working perfectly, so I was surprised to find the repeated posts the next day.

My first thought was that some mistake in the loop was making the script stutter. But it wouldn’t stutter when I tested it, and the connection to the blog wasn’t even in the loop. Eventually I learned that I had somehow created a second launchd process; the posts were repeated because twitterpost was being run twice each night. Killing the second launchd process eliminated the repeated post.

Update 9/15/09
Hey, it works! Last night, the script couldn’t connect to Twitter for an hour. I have it set to start at 1:15 am, but last night’s post is timestamped 2:15 am. Launching Console to look at the system log, I found this:

Four failures and then a success. I know the timestamps make it look like all the attempts were made at 2:15, but that’s because the script doesn’t flush its output as it runs; all the output hits the system log when script finishes. I saw the same thing when I was testing the script with the network cable disconnected.

I did my best to simulate a failed connection in my testing, and I thought it would work, but it’s still nice to see it doing what it’s supposed to in a real world situation.

Because I felt bad about sending out repeated feeds, and because I began to question the value of these automatic tweet posts, I decided to create new feeds that excluded the Twitter posts. Patrick Mosby had already done this through Yahoo! Pipes, and my first thought was to just link to his feed. But I didn’t want to be dependent on his maintaining that feed, so I just copied his work on my own Yahoo! account. 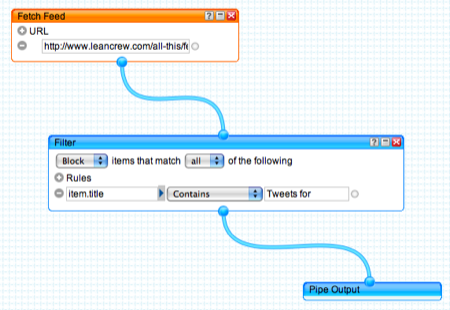 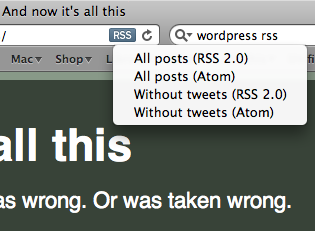 I’ve never understood the niceties of RSS 2.0 v. Atom, but since WordPress and Yahoo! Pipes make it easy to provide both, that’s what I’ll do.