Based on an article surveying iPhone newsreaders1, I downloaded the free version of MobileRSS and began using it last week. Tonight I’m deleting it.

It has some good points:

But it’s terribly unstable, especially when you have more than a handful of unread items. Tonight it must have crashed—screen goes black, then back to the home screen—a dozen times as I made my way through about 20 items. That’s absurd. I suppose it’s possible that it’s bad code in the ads in the free version that’s causing the crashes, but with such bad performance I’m certainly not going to buy the ad-free version to find out.

Less important, but more comical, MobileRSS often got confused as to how many unread items I had in the queue. When I saw this, I had to take a screenshot. 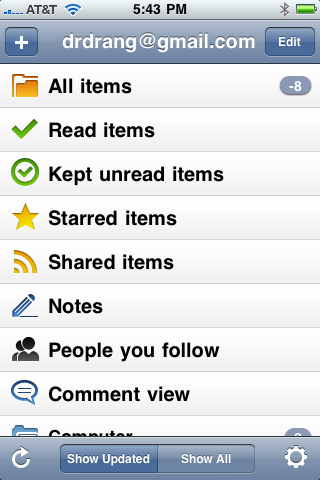 Yes, it thinks I have -8 unread items. Apparently, I’ve read posts that are still rattling around in P.Z. Myers’ brain.