I’ve been using Google Maps to choose bike routes for years. The route I took today from my office to downtown Naperville, for example, uses a set of residential streets and sidewalks along busy roads that I first found by studying its aerial photos. Now Google has a specific option for getting bicycling directions.

I tried it out by entering my home and work addresses. Most of the route it came up with matches my regular path, but one spot was horribly wrong. 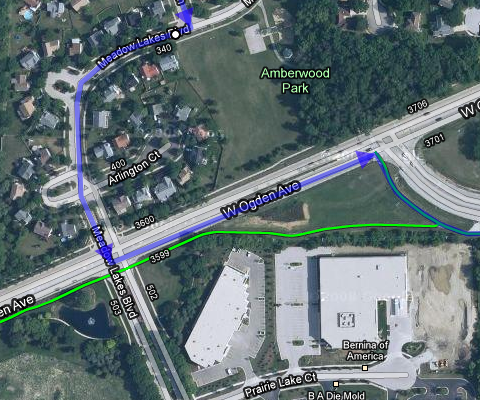 First, Google wants me to ride along Ogden Avenue, which is suicidal, although this instruction may not be as bad as it seems, since no one would be stupid enough to ride in a busy street when a there’s an asphalt path (that’s the bright green line) that’s not only close by, but actually cuts a corner.

No, the real problem is crossing Ogden at Meadow Lakes Boulevard. During rush hour, cars can barely cross that intersection. There’s no traffic light, and Ogden—the main east-west street in the area—has two through lanes and one turn lane in each direction. And there’s no median, so there’s no way for you to cross halfway when one direction is clear and wait in the middle until the other direction clears. Google’s Street View for the intersection shows cars in every lane, and I can guarantee you the Street View photos weren’t taken at rush hour. Just riding on the bike path parallel to Odgen is a pain at this intersection, because drivers on Meadow Lakes are always pulling forward to block the path.

Weirdly, there are traffic lights a block east and a block west of this intersection. Either would be better than trying to cross here.

Google recognizes that its biking directions may be wrong. Here’s the warning/disclaimer that comes with them:

I filled out the little web form that pops up when you click that link, and I have little doubt that Google’s bicycling directions will improve quickly. Still, I think it’s odd to use the term beta for this product. Losing your data is a risk beta testers are used to. Here, you stand to lose a bit more.