Last week, I got really mad at TaskPaper and stopped using it. Over a two day period, it forced me to enter my long and complicated (generated by 1Password) Google password on three different devices: iMac, iBook, and iPhone. iQuit! iShouted.

I wrote a post about TaskPaper’s poor handling of passwords—used for syncing your task lists to the cloud—last month, so I won’t repeat myself. Suffice it to say that if you rely on 1Password to keep track of your Google credentials, TaskPaper forces you to go through an unnecessarily long process to authenticate yourself. Going through that process three times in two days was my breaking point.

So I converted the TaskPaper lists to my homegrown LGTD format (which is a subset of Markdown; converting was just a couple of regexes in Textmate’s Find/Replace window) and went back to using TextMate to handle my to-dos.

It was awful. I couldn’t drag tasks and projects to reorder them. I had gotten so used to seeing my task list nicely formatted with proportional fonts of different sizes, weights, and indentation that it just didn’t look right in a monospaced font anymore. 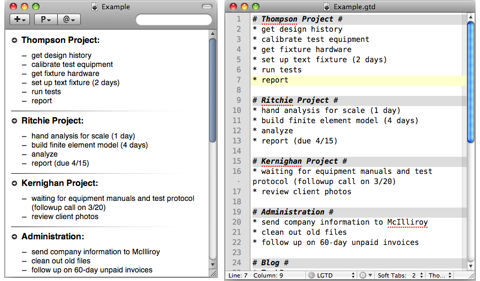 And syncing my lists was going to take some work. Putting the lists in Dropbox would take care of syncing between the iMac and the iBook, but to sync with the iPhone would mean digging back into the SimpleNote API and finishing what I started a few months ago (before I began using TaskPaper).

So I gave up and made up a new Google password. Like the old one auto-generated by 1Password, it’s a longish mixture of different character types and is considered strong. Unlike the old one, I can remember it when TaskPaper asks for it. I’ve taught it to 1Password and Reeder; there’s probably at least one other app or site that will need a change of credentials because of this.

So TaskPaper wins. I changed how I use other programs so I could keep using it. I’ll grumble when I have to enter the password manually, but I’ll do it.