As I mentioned last November, I have plain text versions of the Metra commuter rail schedule between Chicago and Naperville (where I live) saved in Simplenote. Metra made some changes to the schedule this week, so I updated and decided to make the files available in a GitHub repository. 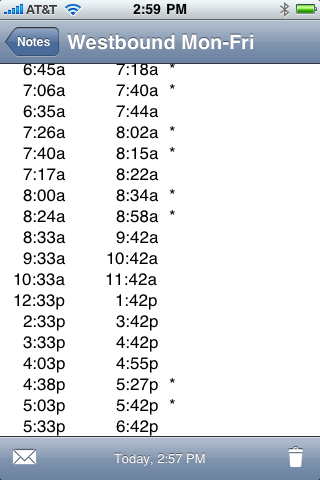 Because Simplenote uses Helvetica, a proportional font, and doesn’t have adjustable tab stops (even if it did, there’s no tab key on the iPhone for entering them), the columns don’t line up perfectly, but they look OK. Until the iPhone gets a decent monospaced font, this will have to do.

There are six schedule files in the repository:

Also in the repository is a Python script, metra.py, that I wrote to reformat the schedule times from the way they’re presented on the Metra web page.

I copy the schedule times from the box and paste them into a text editor. Generally, I get something that looks like this,

which some extra stuff at the beginning of each line that needs to be deleted to make it look like this:

Then I copy those lines and execute

which puts the reformatted schedule,

onto the clipboard. It looks weird here, but that’s because you’re seeing it in a monospaced font, not Helvetica. Finally, I paste the times into the Simplenote webapp and do some minor editing. This usually consists of

The AM/PM test is in Lines 17-21. This works pretty well for the Naperville-Chicago schedule and would probably be OK for other schedules, too. I thought about writing a routine that would work in every case, but it just wasn’t worth the effort. With this simple test, I only had to change a few as and ps.

If you’re not a Simplenote user, you should give it a try. It may be that Jesse Grosjean’s Dropbox-syncing suite of programs will end up working more smoothly, but until that happens, Simplenote is leading the pack.