PCalc 2.2 for the iPhone just appeared in the App Store. It’s not a big upgrade, but it does have a few new features I like.

First is a new theme, called Flynn. I can’t imagine myself ever using it, but it’s definitely fun. 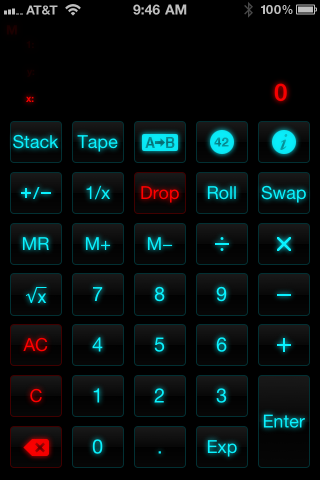 I’m thinking James Thomson should have timed the release of this theme closer to December 17, but what do I know about marketing? Maybe he can do some cross-promoting with the publisher of LightBike.

On a more substantive note, PCalc’s Key Click preference now allows you to set the volume of the click. 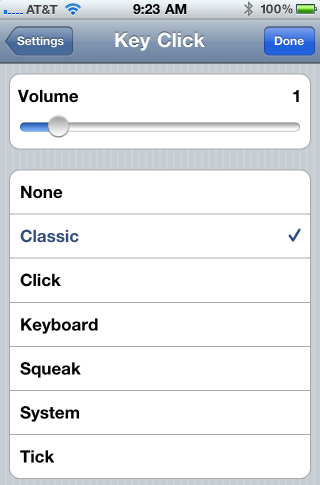 If you’re like me and need to have the phone’s main volume set high to hear the phone ringing in your pocket but don’t like the extra loud clicks when tapping keys, this option is most welcome. And Nigel Tufnel fans will appreciate what happens when you swipe the volume slider all the way to the right.

Finally, PCalc’s advanced settings now have an option, called Clear Memories On AC, that prevents mistaken taps on the AC button from clearing out the memory as well as the stack. This duplicates some functionality, but makes the app work better without messing up its aesthetics.

PCalc already had an SC button for clearing the stack only, but because it was on the “2nd” keyboard, it required two keypresses instead of one. Personally, I always thought the SC key should be on the primary keyboard because it’s less destructive, but I understood the value of having a familiar key as the default. With the new setting, we get the best of both worlds. (There’s an MC key on the secondary keyboard for clearing the memory.)

To me, this is the biggest and best change. I often find myself with a bunch of items on the stack that I’d like to blow away, and I’ve always had to think twice before clearing to make sure I didn’t also delete an important number in memory. With the new setting I can AC with impunity.

Yes, I’ve written an absurd number of posts on PCalc. I’m an engineer; calculators are important to me.