WordPress and Akismet hate me

I’ve been unable to post comments on WordPress blogs, and I don’t know why.

Now it’s true that this is a WordPress blog and I can comment here, but that’s an exception—presumably because I’m the administrator. At every other WP blog, my comments go off into some netherworld.

I first noticed it a few weeks ago at Lawyers, Guns and Money. My comment had a couple of links in it, so I figured LGM was filtering links and didn’t think any more about it. A week later I tried to comment again—with no links this time—and was rebuffed again.

Well, rebuff isn’t quite the right word. When I hit the Publish button, the response is perfectly normal…except that my comment never appears.

Last week I tried a comment at Tom Levenson’s Inverse Square Blog. No luck. I asked Tom via Twitter if my comment had been classified as spam, and he told me it was nowhere to be found. Tom took my comment via email and has since posted it himself; this is very nice of him, but I should be able to post comments on my own.

Figuring this was an Akismet problem (Akismet is a spam filtering service set up by the WordPress people; because it’s easy to install, I suspect most WordPress blogs use it), I went to their contact page to plead my case. Twice. Still haven’t heard back from them, not even an autoresponse.1

I’ve had no luck Googling my problem. I read somewhere that going to podz.wordpress.com can tell you if you’re on Akismet’s shit list, but all I get from it is Checking… 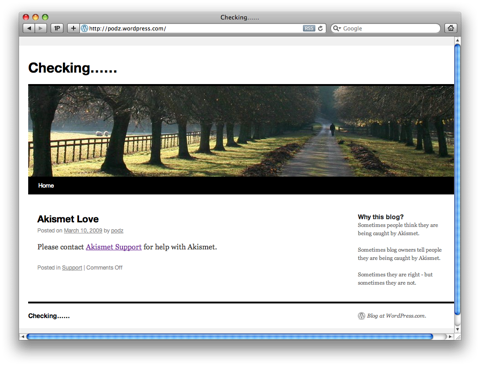 Today’s was the weirdest experience. I tried to leave a comment at Clark’s Tech Blog. As expected, it didn’t appear. I emailed Clark and asked him to look for it in the spam bucket; as with Tom, it wasn’t there.

I tried to comment again (not sure why). Independently, and at almost the same time, Clark upgraded his blog to WP 3.0.1 (just released today), and both my comments suddenly appeared!

So maybe it’s a problem with WP 3.0, not Akismet? Maybe it’s some interaction between the two that got fixed in the latest point release?

I have been able to comment again at Clark’s place, so that’s a good sign. On the other hand…

I went back to Inverse Square to try again. The comment failed in the usual way, but I don’t know for sure whether it’s running 3.0.1. It’s hosted at wordpress.com, so it’s likely to get the latest and greatest version of WP shortly after it’s released, but maybe it’s still too soon. And there’s no way to know when self-hosted blogs like LGM will get around to upgrading.