Electric drip coffee makers for the home got popular in the ’70s. The Engineer Guy, Bill Hammack, has a nice video describing how the pump works. In this post, I’m going to talk about the engineering behind another part of the coffeemaker, the hot plate that keeps the carafe warm. In the process, we’ll revisit snap-through buckling1 and see how improvements in hot plate design actually led to a more dangerous product. 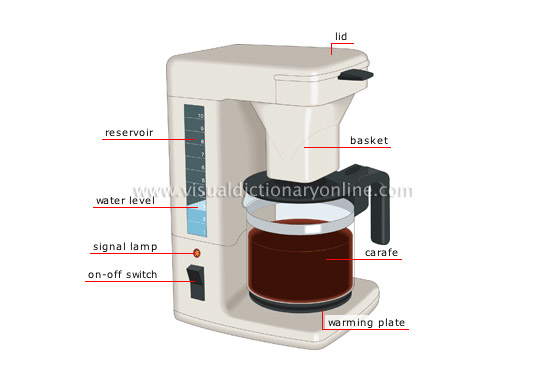 (Image taken from Visual Dictionary Online. As if you couldn’t tell.)

The hot plate is an aluminum disk with a resistance coil heater underneath. When the coffee maker is on, the current to the heater is controlled by a thermostat. I’m not sure how the thermostat is made now, but 20+ years ago it was a little bimetal disk, a shallow dome made of two different metals bonded together. The metal on the underside of the dome (darker in the diagram below) had a higher coefficient of thermal expansion than the metal on the upper side.

The thermostat was placed under the hot plate, so it would warm up along with the plate. As it warmed, the difference in the coefficient of thermal expansion would cause the underside of the dome to grow more than the upper side, slowly flattening the dome. For a while, electrical continuity would be maintained by the springiness of the center contact, but at a prescribed temperature (determined by the dimensions and material properties of the bimetal disk) the disk would snap though to an upside-down position, just like the base of an oil can being pushed by your thumb. Contact at the center was lost, the circuit opened, and the resistance coil and hot plate would begin to cool.

When the bimetal disk cooled sufficiently, it would snap back up to make contact at the center, the circuit would close, and the cycle would begin again.

You may be wondering how long the disk would last, snapping back and forth like that. The answer—initially, at least—was “not very long.” My sense is that the designers didn’t count on people brewing up a pot of coffee and leaving it on the hot plate to stay warm for hours and hours. And then doing the same thing the next day, and the day after that, and the day after that. The little disks were asked to go through many more cycles than anticipated, and they failed through fatigue.

The problem with fatigue failures was that the disk could give out in either the up or down position. If it failed in the down position, you had a hot plate that didn’t work—annoying, but not dangerous. If it failed in the up position, though, you had a hot plate that kept getting hotter. If not turned off, the resistance coil would eventually melt the aluminum plate and set the coffee maker on fire. How likely was it to fail in the up position? 50% It was basically the flip of a coin.

The engineers who designed these coffee makers weren’t stupid, and they anticipated this dangerous mode of failure. They put a small device, called a thermal cutoff or TCO, in the circuit under the hot plate. The TCO acted as a thermal fuse:

Conceptually, the TCO worked like this: A low temperatures, the pellet (the light blue rectangle) kept the contacts within the TCO together.

At high temperatures, the pellet melted, and the spring pushed the internal contacts apart, opening the circuit.

The TCO was a safety device. It had nothing to do with the normal operation of the hot plate and was called into play only if the bimetal disk failed in the up (closed) position.

So the early coffee makers weren’t fires waiting to happen, but they did have frustratingly short lives, especially when they were used in places like company lunch rooms where the hot plates might be left on all day. The bimetal disks just couldn’t take that many cycles of snapping back and forth; and when they failed in fatigue the hot plate was dead, because either the thermostat had failed open or the TCO had cut out. 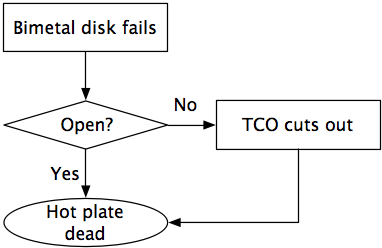 The engineers wanted to improve the life of the coffee makers, so they set about designing more robust bimetal disks. And they were successful. Coffee makers—even those under heavy use—began living longer. And everyone was happy until the fires started.

How could a fire start with a TCO in the circuit? It turned out that the little meltable pellet in the TCO had a secret that no one knew about.

At the operating temperature of the hot plate, the pellet inside the TCO wouldn’t melt, but it would very slowly sublime—that is, transform directly from a solid to a gas. The pellet would, therefore, shorten over time. You might think this isn’t so bad; once the pellet got short enough, the contacts would separate and the circuit would be open. You’d get a dead hot plate, of course, but not one that would start a fire.

This is how improving the design made the coffee makers more dangerous. When the bimetal disks were failing early, the TCOs weren’t old enough to have sublimed much. When called upon to open and prevent runaway heating, they’d work as designed.

But when the bimetal disks were improved, the TCOs were much older—years older—when asked to perform, and some of them couldn’t because their contacts were fused. If the bimetal disk failed in the up position, there was nothing (other than maybe an alert person nearby) to turn off the power to the resistance coil. Even when there was no fire, there was often a scorched countertop.

Eventually, the sublimation problem was discovered and solved by changing the pellet material. The problem took a long time to resolve because it took a long time to manifest itself. This is why engineers tend to be cautious and even pessimistic; even when you think you’re making things better, you may be making them worse.