I’m giving Alfred a try. I’ve been using LaunchBar for 6½ years (ever since Alcor warned us that Quicksilver wouldn’t be stabilizing any time soon) and have ignored the many Alfred recommendations I’ve seen. LaunchBar was fast and reliable, and my fingers were trained to its rhythms. I even gave up on Jumpcut a couple of months ago to use LaunchBar’s clipboard history.

So why the change? Well, I’m not certain that I am changing. I’m going to be running Alfred exclusively for a couple of weeks, but that doesn’t mean I won’t be going back to LaunchBar. But what inspired me to start this trial is the prospect of running Yosemite on the machine I’m typing this on: a 2010 MacBook Air with a Core 2 Duo processor and 4 GB of RAM.

By all accounts, Yosemite will run on this computer, but my dismal experience running Lion on a 2006 iMac has made me leery of Apple’s assurances.1 A few days ago, I started wondering about the memory footprint of the apps I commonly run, so I opened up Activity Monitor and had a look. It showed LaunchBar using over 900 MB.

This was on a system that hadn’t been rebooted in ages, so the LaunchBar process was quite old. I quit and restarted LaunchBar to see if the 900 MB figure was an anomaly. LaunchBar’s footprint started out at about 100 MB but quickly climbed to over 400 MB. This was when I decided a look at Alfred would be prudent. I downloaded the basic (free) version and started it up. Much different.

Replies to this tweet told me that I could expect similar memory use by Alfred even with the Powerpack. That’s when I decided to buy the Powerpack and give it serious trial.

(To be fair to LaunchBar, I must mention that I was able to reduce its memory use by tweaking some of its indexing settings. But it was still using over 100 MB, which seems like too much for an app that’s always running in the background.)

Alfred is, for the most part, enough like LaunchBar that my fingers do the right thing, but there are some exceptions. My thumb keeps hitting the spacebar to drill down through folders but all that does in Alfred is add a space to the search string. I have to retrain myself to use the arrow keys. Conversely, instead of thumbing the spacebar to start a file search, I tend to start typing the name of the file right away, which usually causes Alfred to start a Google search.

Also, Alfred hasn’t been able to find some of the AppleScripts I used to run from LaunchBar, so I’ve started turning them into Workflows. These Workflows are embarrassingly simple—just a keyword and an AppleScript—but they work and take almost no time to make. 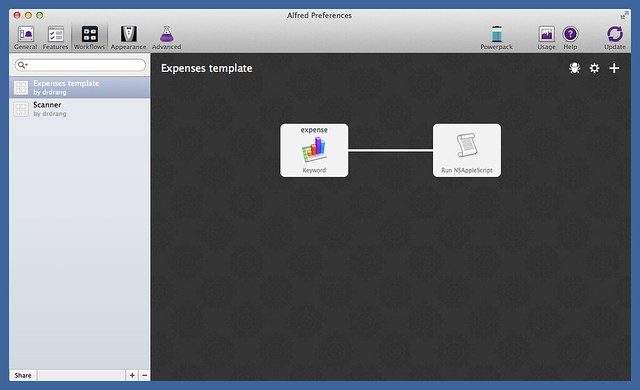 I start by clicking the + button at the bottom of the window and work my way through the nested menus until I find the Keyword to AppleScript item.

Then its just a matter of filling the keyword and title into the Keyword panel and pasting my previously written AppleScript between the on alfred_script(q) and end alfred_script lines in the AppleScript panel. For the Expenses template workflow shown above, I used the script described in this post from a couple of months ago. The full script in Alfred is

One place where Alfred is clearly better than LaunchBar is in its clipboard history. Alfred shows several lines of each clipboard entry in its right panel, whereas LaunchBar shows only the beginning of the first line, much like Alfred’s left panel. 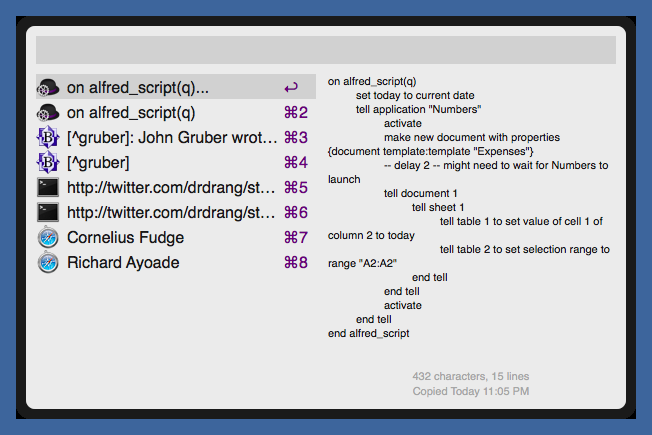 So far, the frustrations I’ve felt with Alfred have been fixed by tweaking its settings. If that remains the case, I’ll probably switch to it permanently. To get essentially the same functionality using much less memory is too good a deal to pass up.