Back in the old days (that is, maybe three years ago), everyone on Twitter used some specialized URL shortening service, like bit.ly or tr.im, to keep their tweets under 140 characters.1 That became counterproductive when Twitter started its own shortening service and built an infrastructure around it. Nowadays, it’s much better for your readers if you just paste in the full, true URL of the page you want to link to and let Twitter handle the shortening and the display.

Except when you want to include a link in a direct message. Twitter refuses most links in DMs because

If you try to send a link via DM in the web interface, it responds with a terse “Your message can’t be sent.” In Tweetbot, you get a longer but no more satisfying explanation.

Some links are allowed in direct messages. I don’t know all the possibilities, but I know you can include those from Google’s goo.gl service. I don’t send a lot of direct messages, and those I send generally don’t include links, but when I need to send links, goo.gl is what I use.

Yesterday I decided to automate the process of getting goo.gl-shortened links by using Google’s URL Shortener API. I signed up for an API key, but after some experimentation, I found that the key wasn’t necessary. Maybe you need it if you want to track links, but I have no interest in that, especially for one-off links in direct messages.

I followed Google’s examples to learn how to shorten a URL from the command line using curl. Here’s a long example, split up over three lines:

What I wanted to make was a TextExpander snippet that would take the URL of the frontmost browser tab and return a shortened version of it. Here it is. 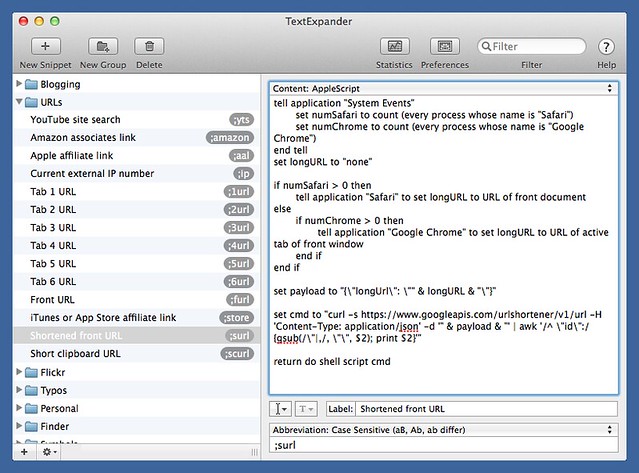 It’s an AppleScript snippet with an abbreviation of ;surl.2 The AppleScript content is this script:

Lines 1–13 are essentially the same as my ;furl snippet. They get the URL of the active browser tab, from Chrome if it’s running or from Safari if it’s running. Line 15 then constructs the JSON payload, and Line 17 builds a call to curl just like the example above. It also pipes the JSON output to an awk one-liner to extract just the shortened URL. There’s a lot of backslash escaping of double quotation marks because AppleScript. Line 19 runs the command and returns the result.

(I decided to use awk here because the JSON returned by the API is pretty simple. If I were dealing with more complex output, I’d mimic what Greg Scown of Smile did in this blog post. He used a headless application called JSON Helper [free on the Mac App Store] to parse the longer JSON data returned from a currency conversion API call.)

I also made a similar snippet for shortening a URL on the clipboard. Its abbreviation is ;scurl and its AppleScript content is this script:

That takes care of OS X, how about iOS? There’s no AppleScript on iOS, and TextExpander doesn’t run scripts, so I went with a Pythonista script that replaces a URL on the clipboard with a shortened version. Here’s the script:

On iOS, I copy the URL I want to shorten, switch to Pythonista, run the script, then switch to Tweetbot to paste the shortened URL into a DM. There’s probably a way to cut out a step or two by using an x-callback URL, but I haven’t messed around with that yet.

None of these scripts are forgiving. Inputs that aren’t URLs will produce nasty output that isn’t handled gracefully. Be aware of this if you want to adapt these scripts for your own use.

Update 8/5/14
I rewrote these scripts to make them easier to maintain.