Thanks to this tweet by Gabe Weatherhead, I spent too much time watching a Smarter Every Day video on breaking pasta. It uses very high frame rate video to answer the question of why a bent piece of spaghetti typically breaks into three or more pieces instead of just two.

Despite my low tolerance for folksy, I like Smarter Every Day, and I think most of Destin’s work is accessible without being dumbed down, a very tough balancing act. Here, though, I think his explanation is off the mark. I rewatched the section from 4:20 to 5:25 several times, and he’s simplified the explanation so much that he’s missed the key feature.

It’s true that the spaghetti on either side of the initial fracture starts to straighten out in an overall sense, but Destin leaves the impression that it’s the straightening itself that does the damage.

Not really. You’re better off reading the text on the screen than listening to the voiceover. The text better matches the paper Destin references later in the video, which gives the real explanation.

Now it’s true that the paper, by Basile Audoly and Sébastien Neukirch at the Pierre-and-Marie-Curie University in Paris, has some math that might be scary, but the description in words and the accompanying photos can be understood by anyone willing to elbow their way past the equations.

The key is that Audoly and Neukirch start with the hypothesis that the second break occurs because of the sudden drop in bending moment1 that comes with the first break. They then reason that same sort of failure should occur if they bend a spaghetti rod into a curve and then release it. They do both a mathematical analysis of this dynamic event and a test.

What they found was this:

[O]ne could imagine the motion of the rod to be essentially given by its fundamental mode of oscillation around the straight configuration… This simple picture misleadingly suggests that, after the release of the rod, its curvature remains bounded by its initial value at all times, and reaches this value every half-period, when the rod is bent the other way around. In fact, the quick initial relaxation of the nonzero curvature at the free end sends a burst of flexural waves, something that is not captured by the fundamental mode only. This burst is responsible for the subsequent increase of curvature and leads to a cascade of cracks.

Here’s the photographic confirmation of their hypothesis: a series of photos taken of a piece of spaghetti, fixed at the bottom and bent into a curve. The upper end is released at time a, and you can see that although the rod does straighten, it does so behind a wave front of increasing (i.e., tighter) curvature. If the curvature at the head of the wave front reaches a critical value (which it does in these photos), the rod breaks. 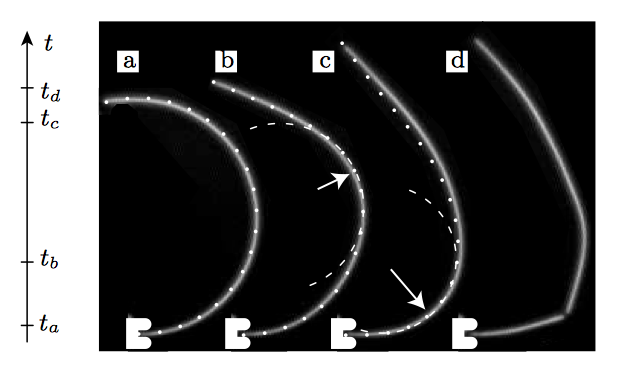 The authors have inscribed circular arcs of decreasing radius at times b and c to help you see how the curvature is increasing along the rod as time marches on. The break that occurs at time d is like the secondary break in Destin’s video.

It’s been 30 years since I studied flexural waves in rods, and I didn’t spend much time on them even then. But I do remember them being tricky bastards, not as well behaved as the longitudinal vibrations of rods or the transverse vibrations of stretched strings, both of which keep their original shape and wave speed, and neither of which increase in magnitude as they travel.

Both the paper and the video mention that this problem eluded Richard Feynman, who thought the secondary fracture was due to “vibration.” To me, wave propagation is a form of vibration, but I guess Feynman was thinking of the overall waving back and forth of the pieces left in your hands. That’s definitely not the cause, so chalk one up to careful engineering mechanics and high-speed video.