In the month since Workflow was released, it’s gotten lots of play in Apple-oriented blogs because it allows people to create iOS 8 extensions (and other automated action sequences) through a scripting interface instead of through Xcode. It’s certainly a powerful program, but I find it frustrating to use.

Part of it is my prejudice against the visual programming metaphor. I think dragging commands around on a screen a clumsy way to program. I understand how people who don’t program would feel more comfortable (less threatened) in this kind of environment, but to me it’s just slow and a waste of space. Still, I accept these limiting environments in Automator and Keyboard Maestro and PCalc because they’re not too clumsy and they allow me to be more efficient once the script is written.1 In Workflow, the inefficiency of programming is so great I wonder if I’ll ever regain the time taken to write the script.

To be fair, I’m sure that people who write their Workflow scripts on an iPad don’t feel the same frustration I do on an iPhone. On an iPad, the screen is split into two panes, with your in-progress workflow on the right and the list of available actions on the left—this is very much like Automator and Keyboard Maestro on the Mac. But on an iPhone, the screen shows only one pane, and you have to keep swiping back and forth between them. Even worse, I often find myself accidentally dragging an action into the workflow when all I want to do is scroll through the actions.

And when I do intentionally drag an action into the workflow, it often won’t go where I want it to. The actions in the workflow pane sometimes jump around on a hair trigger and sometimes refuse to move up so I can add a new one at the bottom. I hope DeskConnect is working to improve the responsiveness of the workflow builder interface.

What I really dislike about Workflow, though, is its poor documentation. Yes, you can tap on an Action and see a short description, but there’s no good way to read through the documentation to get an overall sense of the scope of the actions. Nor can you search these descriptions for keywords that would help you find the command you need.

Update 1/8/15 6:12 PM
Sometimes the depths of my stupidity are astounding. How could I possibly say that there’s no search and then follow it with a screenshot that includes a search field? Maybe I have search blindness.

In any event, my apologies to DeskConnect for the error. 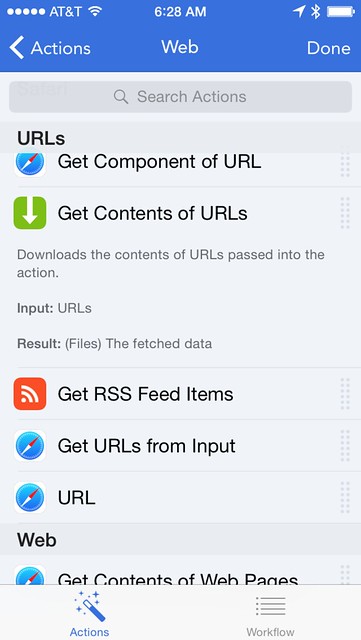 Russ Taber has created a PDF of all the Workflow actions and their descriptions. It’s good work, but

If you visit the Workflow website, you’ll find a help page. Does it provide any help? No. Instead, it links to offsite articles by Lifehacker, Sayz Lim, and the ubiquitous Federico Viticci. They’re all helpful articles, and I’m certainly not one to complain about third-party tips and how-tos, but they should be in addition to official documentation, not a substitute for it.

To get my feet wet in Workflow, I started making an Action Extension to generate affiliate links to items in the App and iTunes Stores. This was inspired by Casey Liss’s similar Action Extension for Amazon Associates links. I soon ran into trouble extracting URLs from App Store pages (about which more later). Adam Swinden came to my rescue and ultimately built his own Action Extension. I soon learned that Federico had also built one. I liked bits of each, so I built my own, called Apple Link, that’s shorter than either and works with any item—app, song, album, movie, audiobook—currently showing in either the App Store or iTunes Store app. On the shoulders of giants…

It uses Quick Look to show you the affiliate link and then puts it on the clipboard. If you want to use it, you should change the two Text actions that say

to whatever your affiliate token is.

My Apple Link extension has one problem with links to apps: it doesn’t work if you arrived at the app’s page in the App Store via the Updates tab. For some reason,2 when you tap on an app in the Updates list, that app will not have a URL associated with it3 and you won’t be able to use the extension. If you get to that app via Featured, Top Charts, Explore, or Search, the extension works fine.

I’m glad I have this extension, but I’m not sure it was worth the effort. I’ll feel better about using Workflow when its documentation is up to snuff. I’m perfectly willing to put in the time to learn a new tool, but I have to have something decent to learn from.