When I bought my current office iMac a couple of years ago, I decided to configure it with the Bluetooth keyboard and trackpad. This was something of an experiment. While I’d been using small keyboards with trackpads for ages on my notebook computers, I’d never before used a desktop machine without a numeric keypad,1 and I’d never used a desktop Mac without a mouse.

My thinking was this:

That the setup has lasted two years is probably a good indication of its success. Having both a trackpad and a mouse has worked out much better than I expected, and I wouldn’t want to go back to using a mouse only. But the lack of a numeric keypad still gives me trouble.

So last week I began a new experiment with Apple’s wired, full-sized keyboard. I went to the local Apple Store and did that thing where you feel like you’re stealing. After a few days of use, I think I’ll be returning it. The pluses of the full keyboard are: 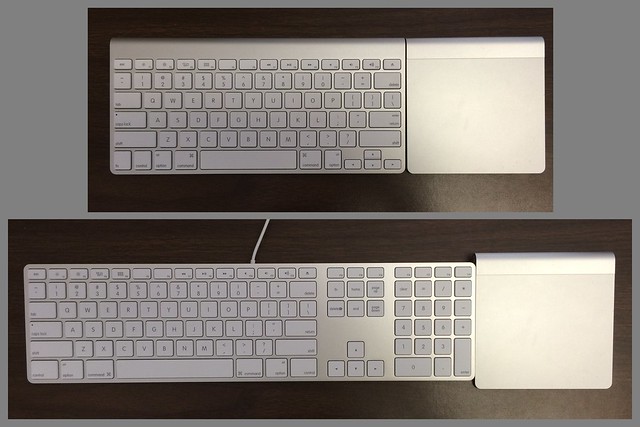 I know I can get eliminate the minus of the cord by getting a Logitech K750, but that doesn’t solve the size or key layout problems. Also, if my keyboard is going to be wireless, I’d prefer it be Bluetooth so I don’t have to reserve a USB port for that little transceiver thing.

The obvious solution, I suppose, is a separate Bluetooth numeric keypad. I can tuck it away on the foot of my iMac when I’m working normally and bring it out when I have lots of numbers to enter. Or maybe it stay between my keyboard and screen to make it more available. There’s one from Belkin sold through Apple, but the number and content of its one-star reviews is frightening. This Satechi one got good reviews, but the LCD seems a little hokey. And its calculator mode holds no appeal to me whatsoever. 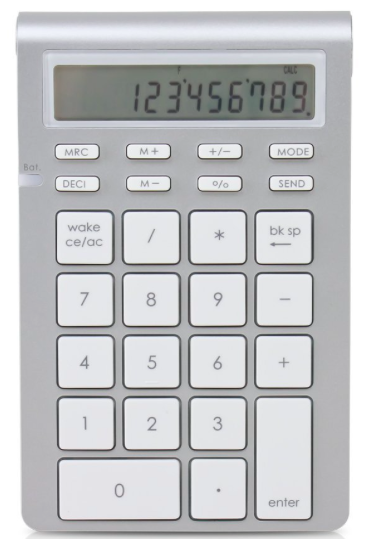 Sticking with the way I’ve been working for the past two years certainly isn’t a burden, but I’d like something better. I’ll look around for other number pad possibilities before giving the Satechi a try. Suggestions are welcome.