When I first heard Marco Arment’s—how shall I put this?—interesting approach to calculating the probability of failure of a system with multiple modes of failure, I decided to let it pass. It was on the most recent episode of The Talk Show, and he seemed to be speaking off the cuff, so even though what he said was wrong, it didn’t seem fair to criticize him for it. But then came this week’s ATP, and when John Siracusa spoke approvingly of it,1 I knew I had to butt in. People believe John.

The context was Marco’s “functional high ground” post. The problem with Apple’s declining software quality, he said, was that more bugs leads to a higher probability of software failure. So far, so good. Then he said the insidious thing about this is that individual failure probabilities don’t add, they multiply, which makes the failure probability of the overall system increase more than linearly with the number of bugs. No. It doesn’t work that way.

But Marco’s not discussing a system with backup redundancy. He’s talking about a system in which any individual failure constitutes a failure of the system. In other words, Failure A or Failure B or Failure C, etc., causes system failure. For this, we need to know how to get the probability of a union. 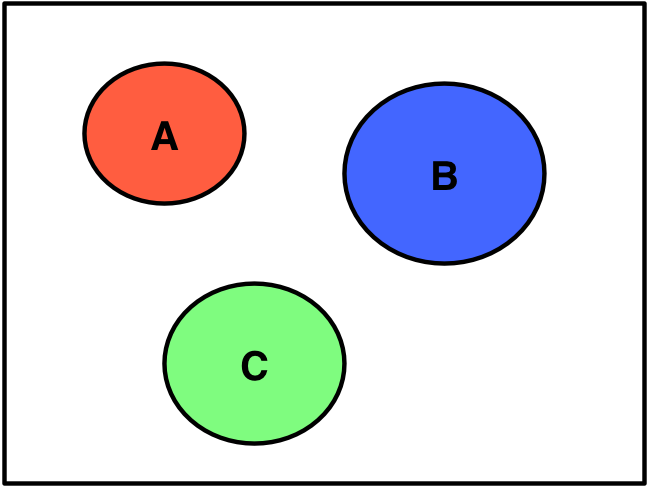 If the Venn diagram is drawn with the events sized according to their probabilities, the probability of the union \(A \cup B \cup C\) is the sum of the red, green, and blue areas.

In most situations, the individual failure events are not mutually exclusive: 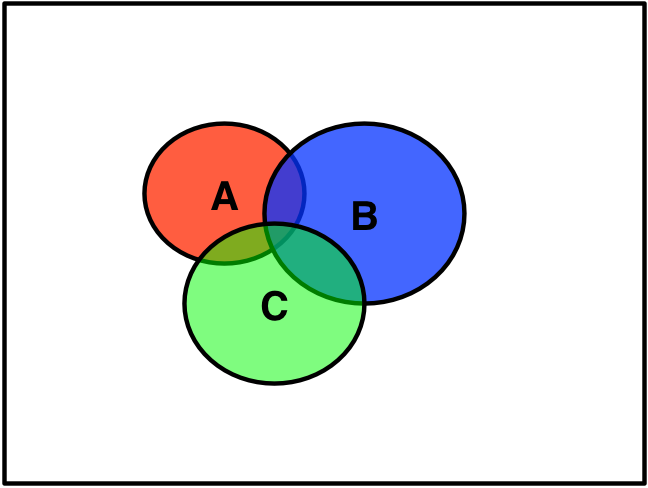 Here, the probability of the union \(A \cup B \cup C\) is the area enclosed by the overall outline of the three ovals, which is less than the sum of their individual areas.

The clever way to figure this out is to use de Morgan’s Law, which says

This isn’t much less than 3%, but it is less. I wonder if Marco’s confusion about multiplication came from a hazy memory of multiplying the probabilities of the complements of failures, as we’ve done here.

Regardless, the important thing is that probability of a union is not greater than the sum of the individual probabilities, and that the probability of failure of a system doesn’t grow at a rate more than linear with the addition of more modes of failure. It grows, but at a rate less than you might expect.

Which is lucky for Apple.

Update 1/18/15 7:49 AM
Kieran Healy provides a more likely explanation for Marco and John’s confusion: the combinatorial increase in failure modes that comes from interactions between systems. As system behavior increasingly relies on components talking to one another, the number of ways the system can fail increases explosively as the number of components is increased—the rate is much greater than linear.

So while I was responding to what Marco and John said—which didn’t make sense—Professor Healy dug into what they probably meant.