Earlier this evening I was looking through tweets that link here,1 and after following a particular thread backward, I found this: 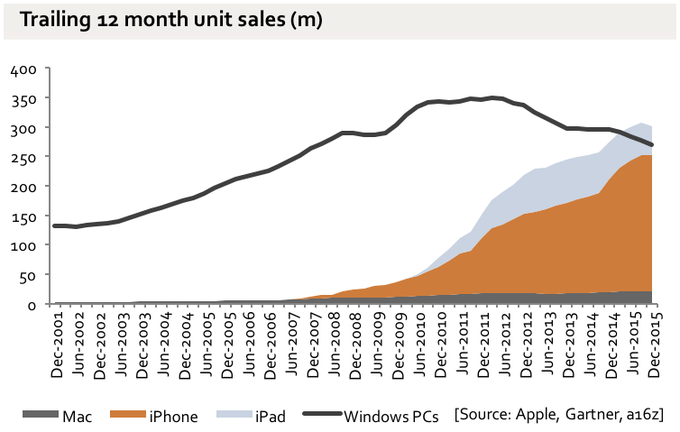 (You can see a larger version of the image by clicking on it.)

My animus to stacked area charts led me to tweet this:

That got a very quick response:

Evans is right.2 Judgment does beat rules. I’m not averse to breaking rules occasionally, but you have to exercise good judgment when you do so. You have to have a reason.

In Evans’s graph, what’s being hidden is the iPad’s declining sales. Oh, it’s there, no doubt, but it isn’t as obvious as it should be because it’s sitting on top of the upward sloping iPhone.

Now, you might argue that the purpose of Evans’s graph wasn’t to show the iPad’s decline. That’s probably true, but if the purpose was to show Apple’s devices rising and overtaking Windows PCs, why bother breaking Apple’s sales into its components? Why not just show Apple’s composite sales of Macs, iPads, and iPhones as a single line, growing up and crossing the Windows PC line?

If you’re going to show the individual components, you have an obligation to show them clearly, and Evans’s graph doesn’t do that. Interestingly, if he had given it some thought, Evans could have made a stacked area chart that presented the data with less distortion. Simply plot the iPad sales between the Mac and the iPhone.3 The iPad sales are less distorted in this view because the Mac sales provide a relatively flat baseline for the iPad to sit upon. Of course, the iPhone sales are more distorted than in Evans’s graph because of the iPad hump, but that’s less of a worry, I think, because iPhone sales are so much higher. Also, the gridlines in the background aid in seeing the heights of the individual components.

Is there some rule that you have to stack the sales in the order that the products were introduced? It’s certainly natural to stack them in that order, but it isn’t a rule. And if it were, this would be a good place to break it.

By the way, I don’t want to give the impression that I actually like this graph. I just think it’s better than Evans’s.4 Lesser of two evils.

And as for judgment, it’s nice to talk about, but it’s better to apply.