This morning, Casey Liss tweeted out a complaint about a typical Siri stupidity:

This was a bit of a shock to me, not because I thought Siri was smarter than this, but because I had been collecting similar Siri screenshots concerning dates and times for a few days and was planning to write a post about it. This post.

Before I get any further, let me tell you that some of what I’m going to say here was already covered by David Sparks in this post from almost six years ago. This was just a year and a half after the “beta” introduction of Siri with the iPhone 4S, and David was pleased with what Siri could do. I like a lot of what Siri can do with dates, too, but there are still some frustrating blind spots and inconsistencies. In fact, with one of David’s examples, Siri isn’t as convenient as it was six years ago.

Context has always been one of Siri’s weaknesses, and that’s where it failed Casey. Any normal human being would understand immediately that a question asked in January about days since a day in December is talking about the December of the previous year. But Siri ignores (or doesn’t understand) the word “since” and calculates the days until the next December 18.

If you take care to give Siri the full date, it gives the right answer:1 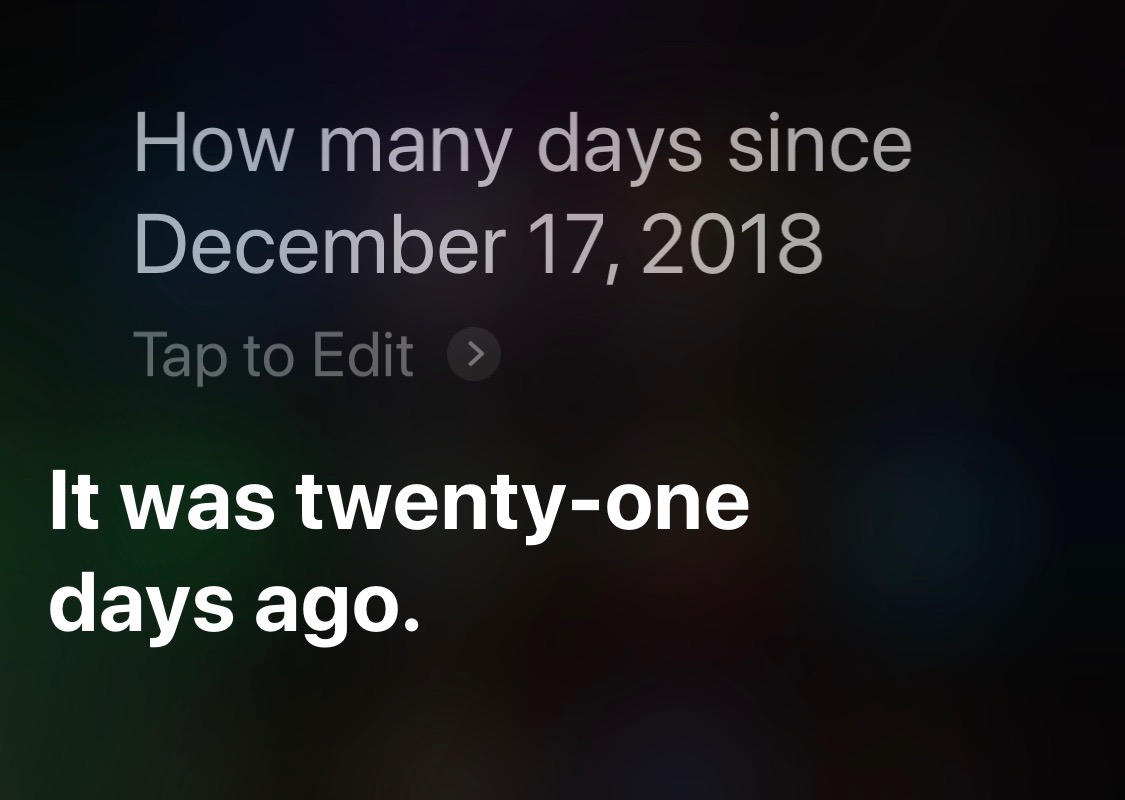 You might think—which is to say, I originally thought—that Siri defaults to the current year when the year isn’t given in the question. You would be wrong. Take a look at this, a question I asked today: 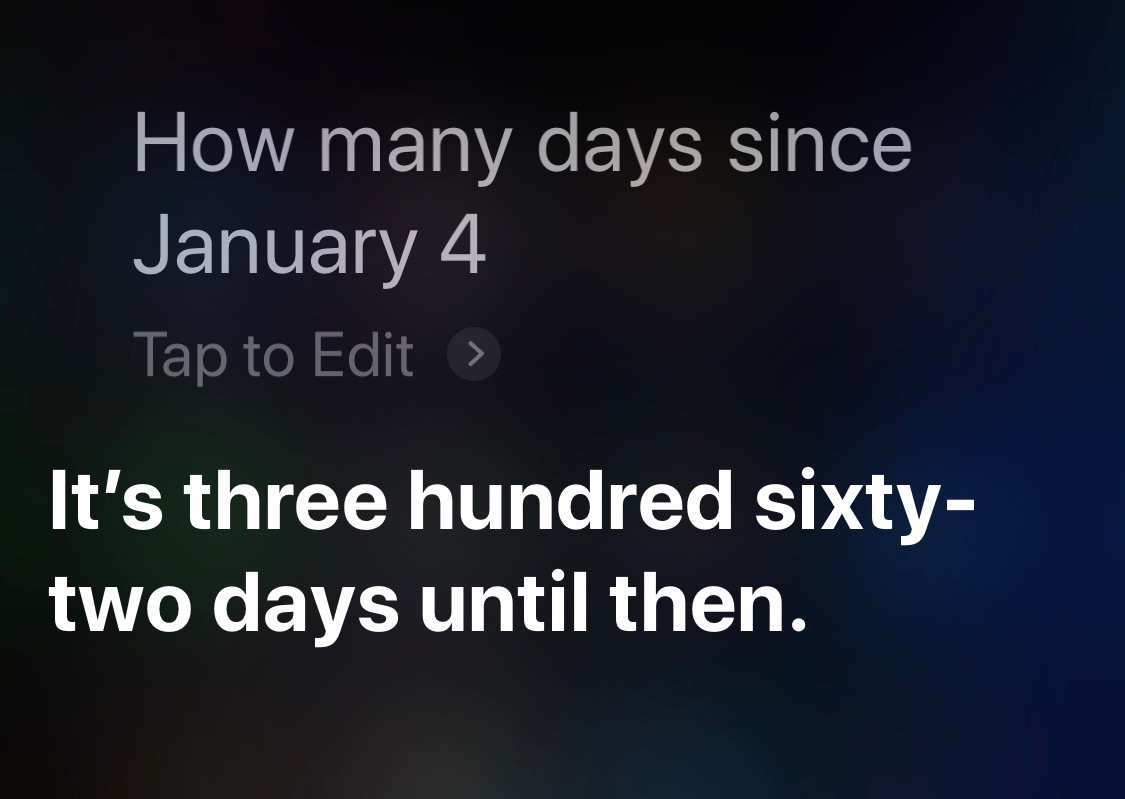 Apple would argue that Siri is forward-looking technology.

One bit of date math on which Siri has never failed me is getting the day of the week for a given date. I use this quite often at work, especially when the date in question is years in the past and flipping backward through a calendar app would take too long. 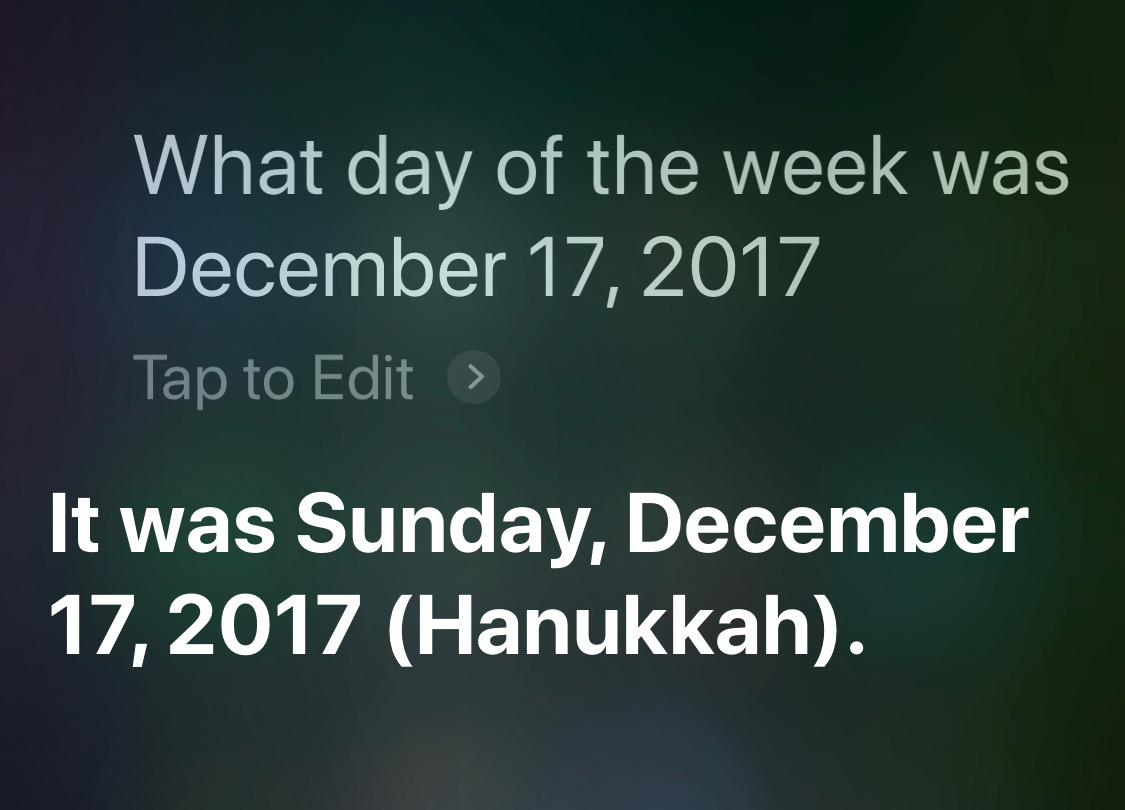 For dates well in the past, I would never think of not including the date, but for dates later in the current year, I would. Siri handles them well: 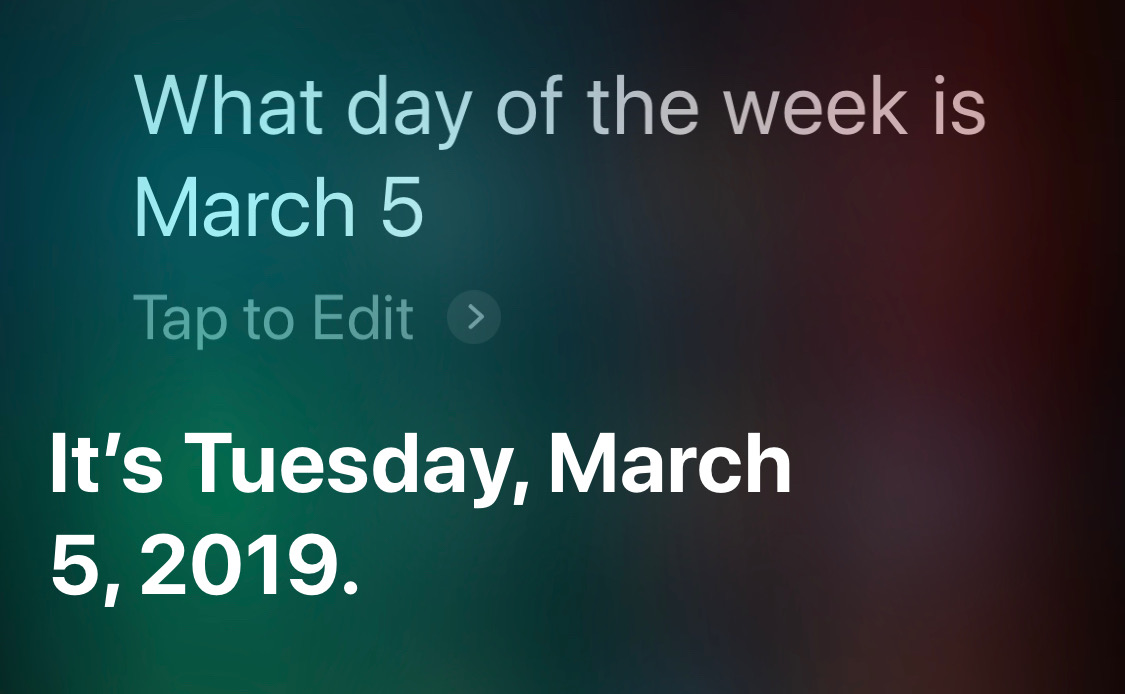 What about a day earlier this year? 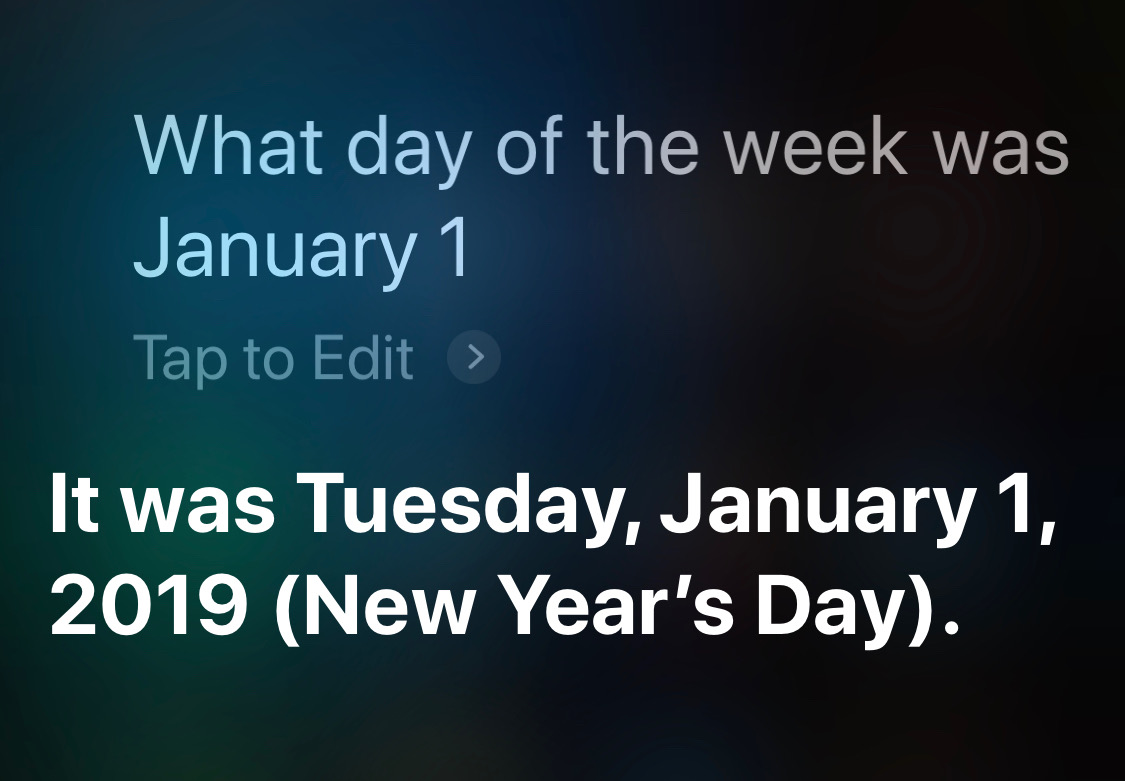 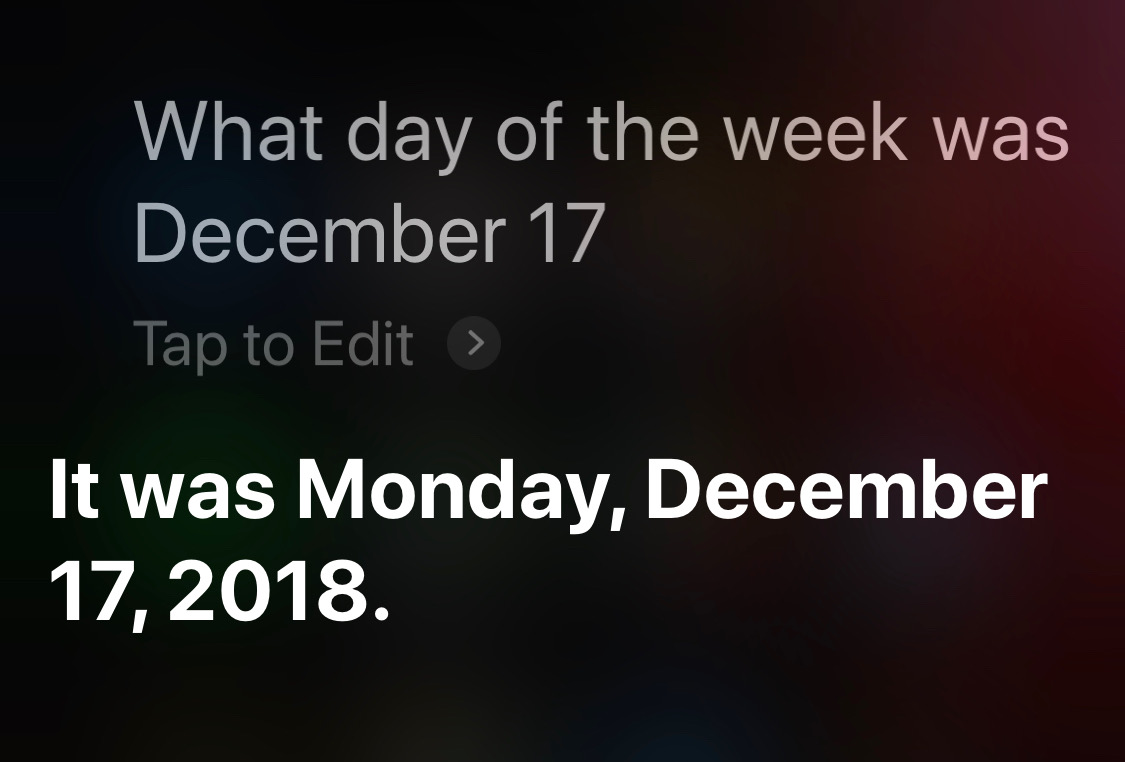 And what if I change the tense of the question? 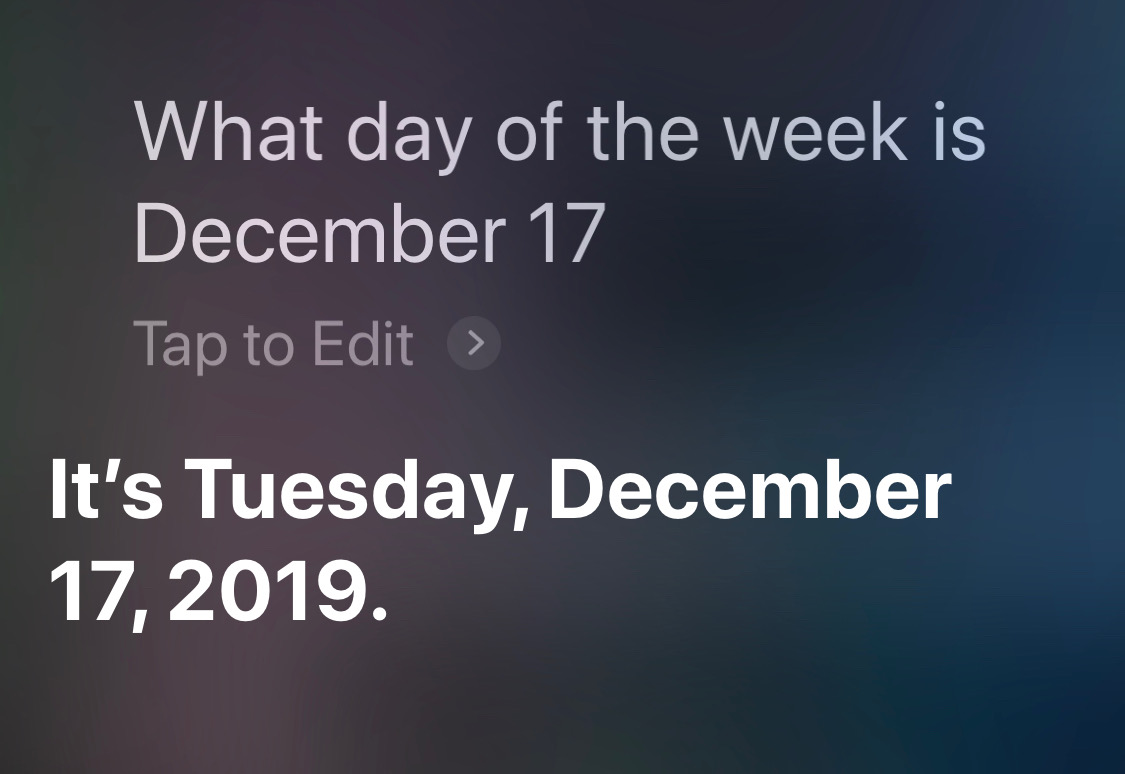 Suddenly, Siri is a master of context. I am at a loss to explain why.

In my experience, Siri is good at figuring out dates some interval away from a given date: 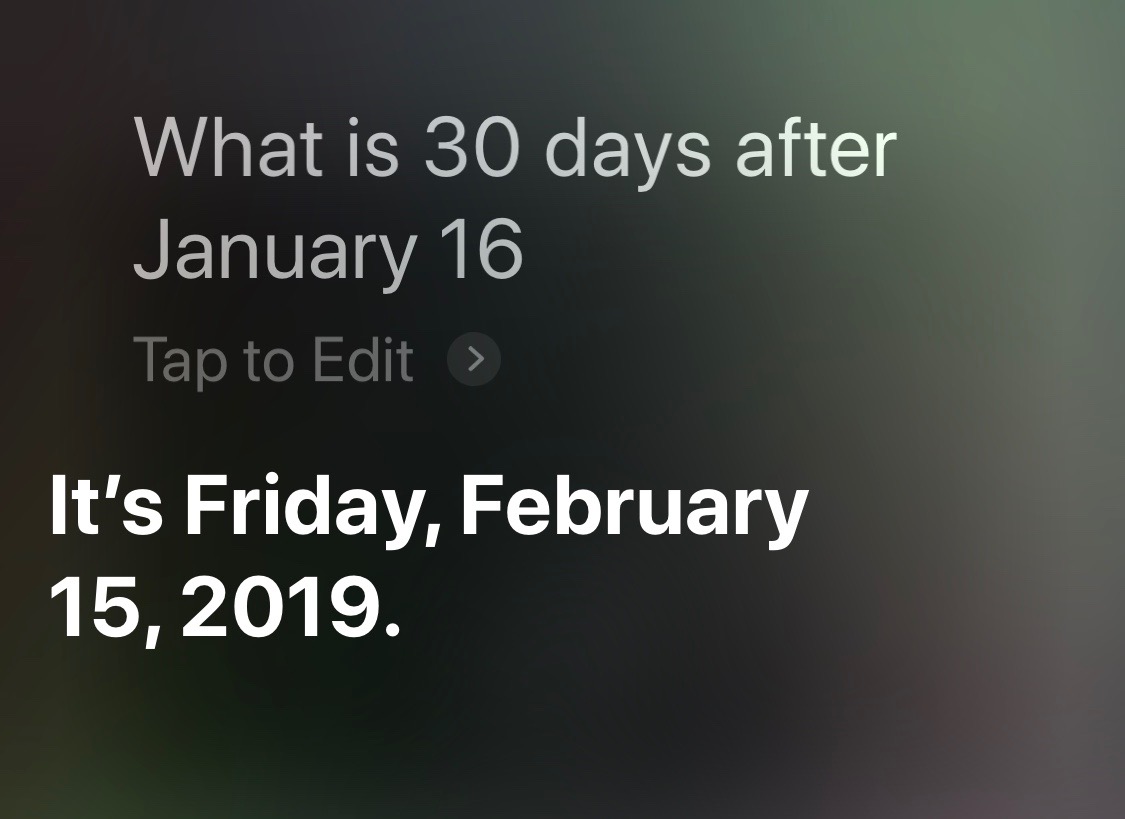 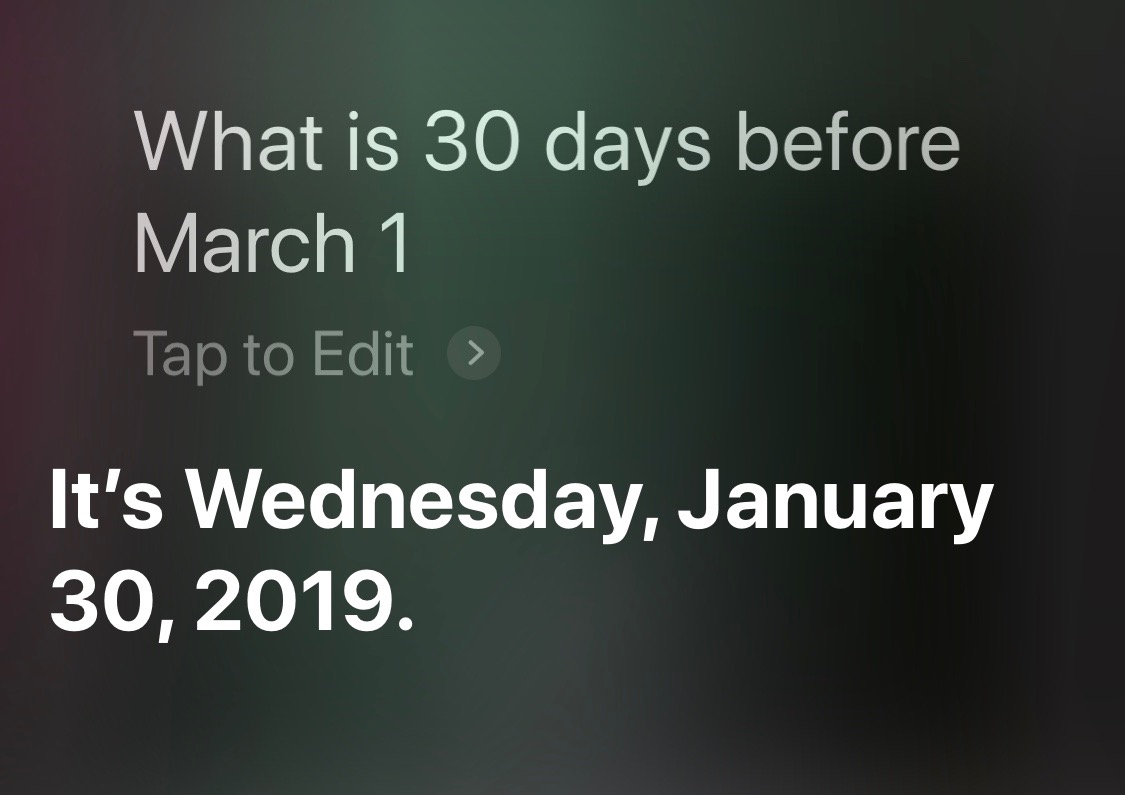 I can’t really blame Siri for thinking I mean this year when I ask about a date after December 17: 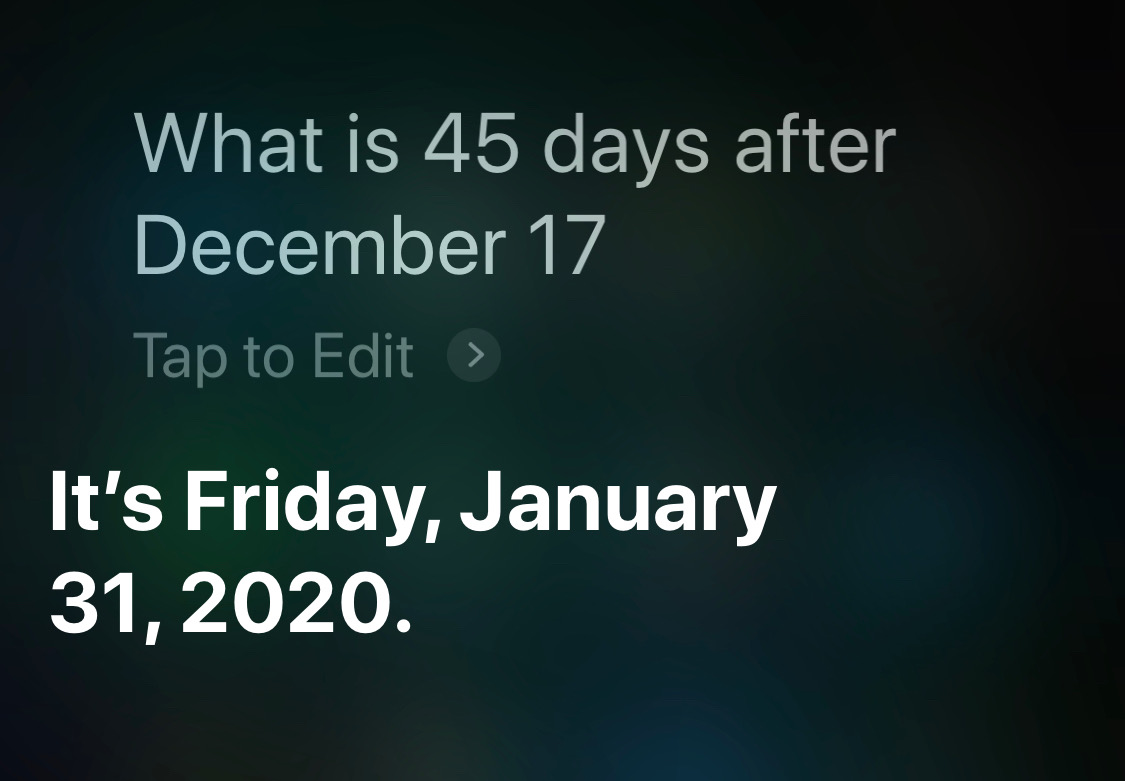 Here’s the question for which Siri has lost some of its intelligence: 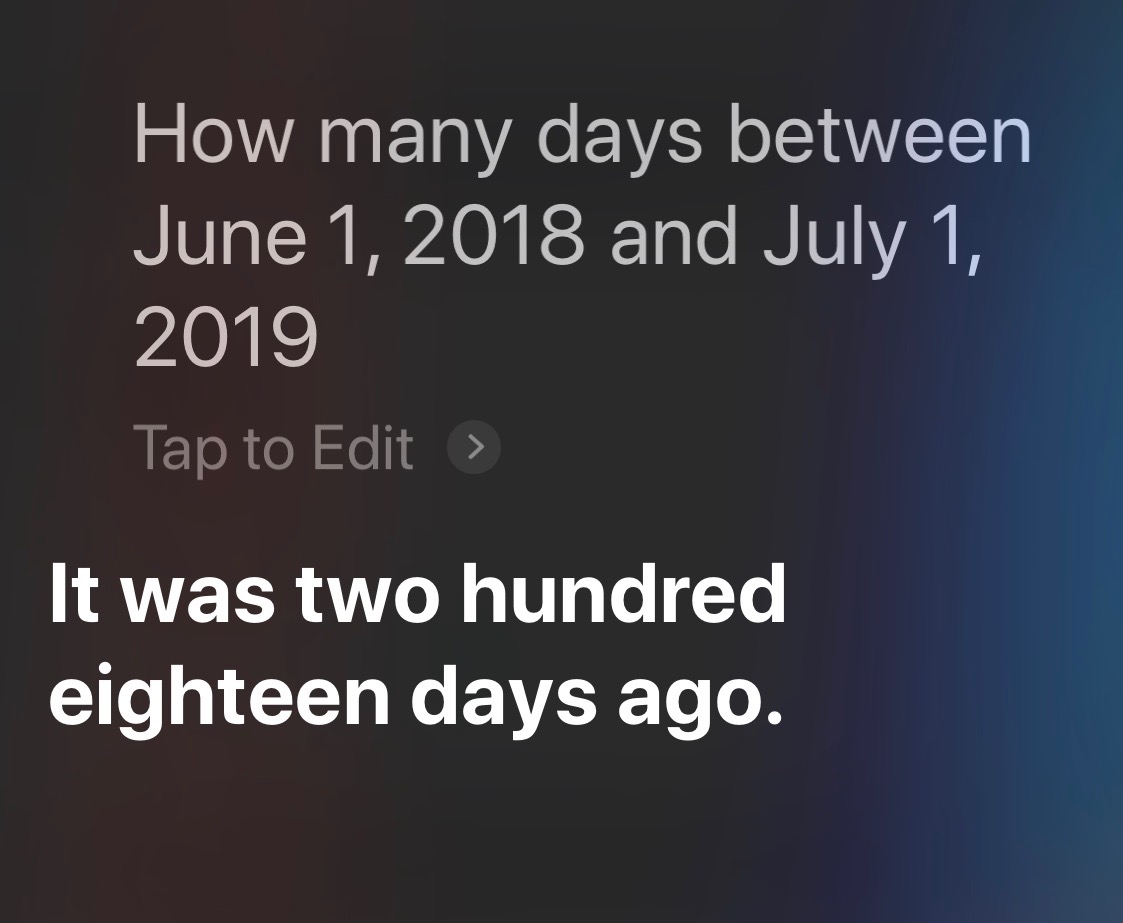 Six years ago, Siri answered this kind of question correctly for David Sparks. Interestingly, it gave its answer in the form of a Wolfram Alpha page: 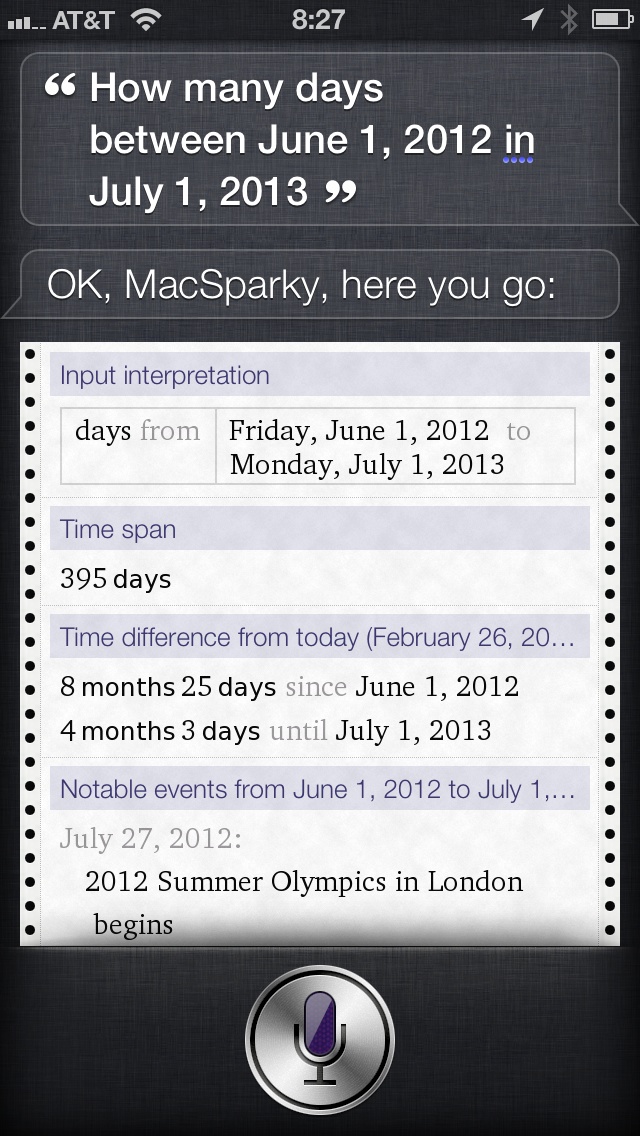 @drdrang @caseyliss That is why you use the Wolfram Alpha trick (you’ve probably seen it but just in case).

Personally, I think it’s easier to just include the year for that type of question, but the Wolfram Alpha trick is the only way I know of to get the number of days between two dates. 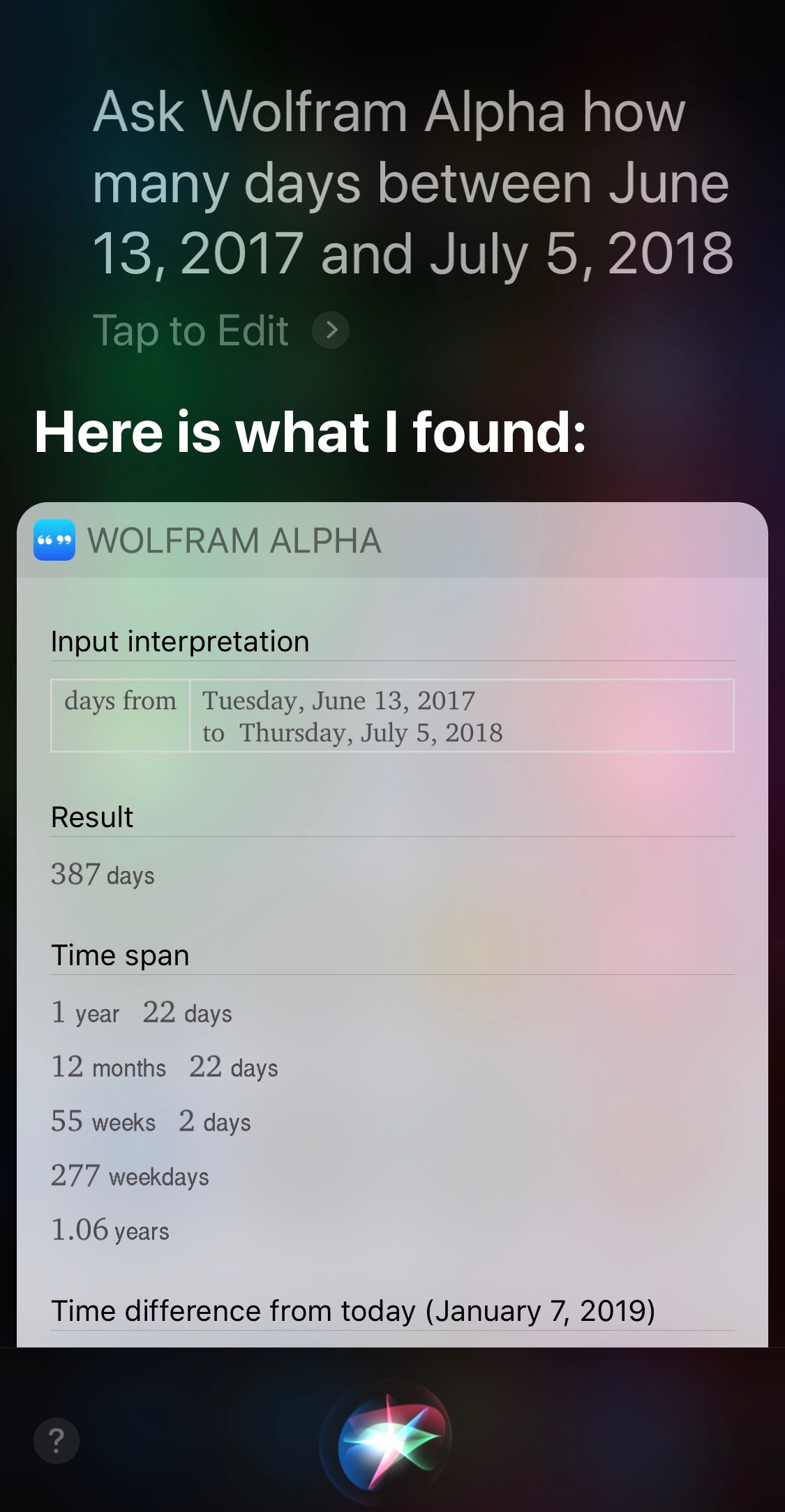 Similarly, Siri can’t give you elapsed time within a day by itself, 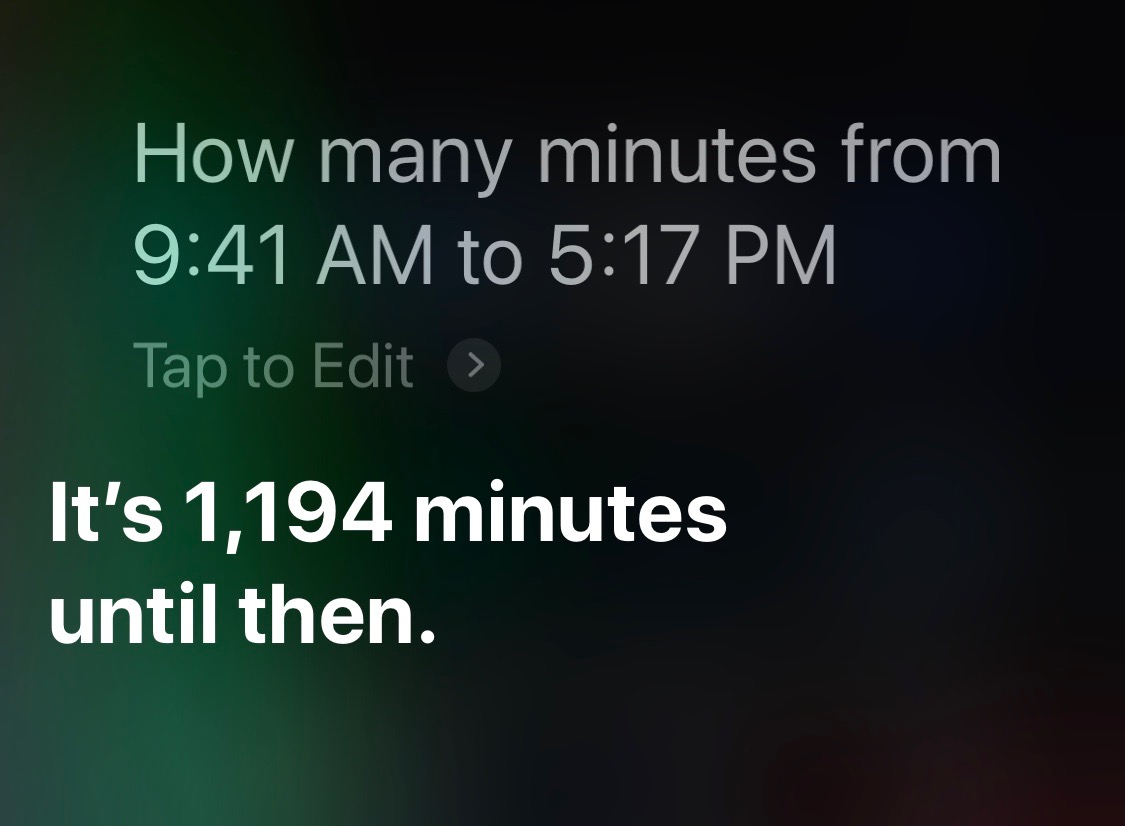 but it can through the Wolfram Alpha trick: 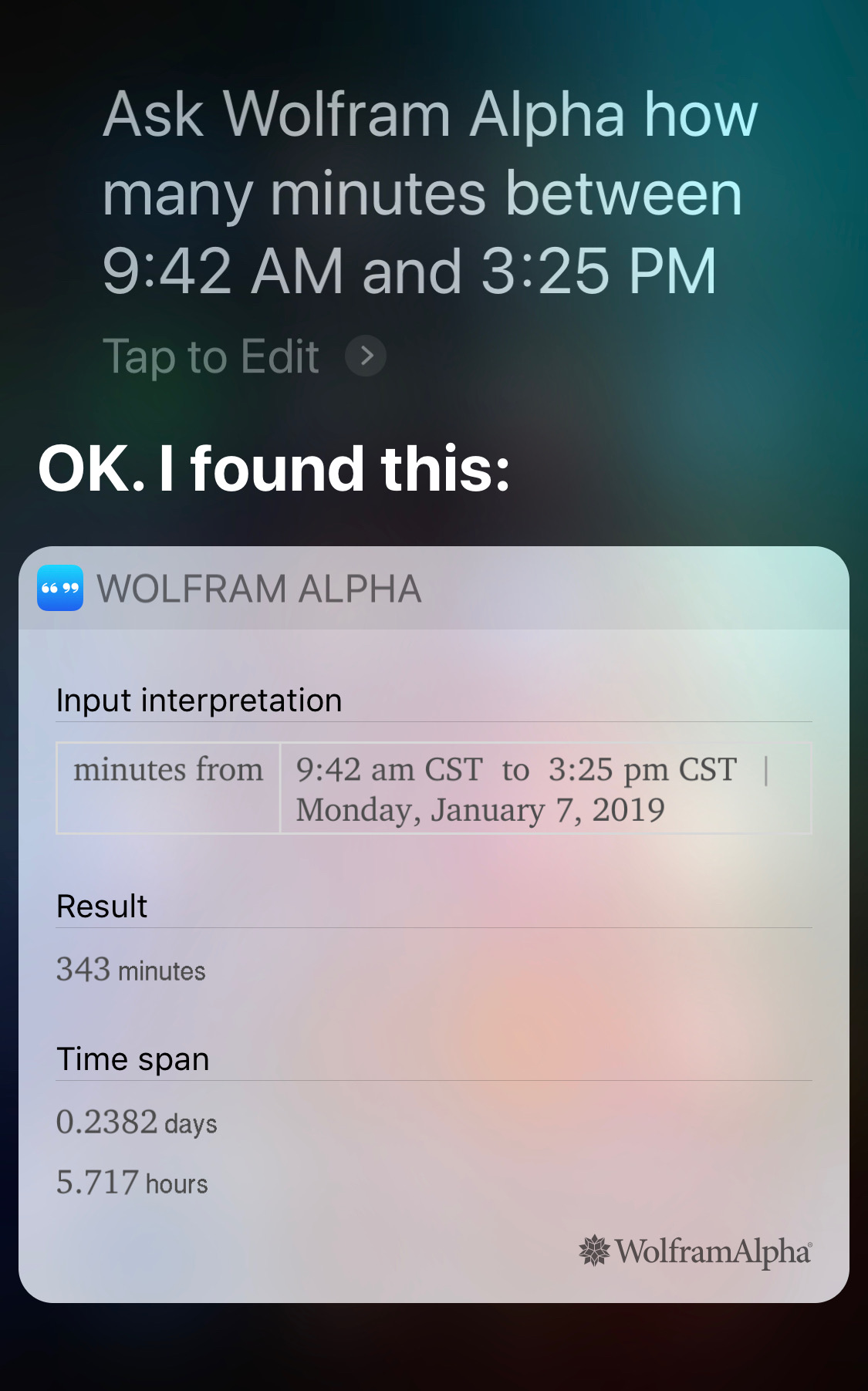 Take care how you phrase this question, or you’ll get the dreaded “here’s what I found on the web” answer: 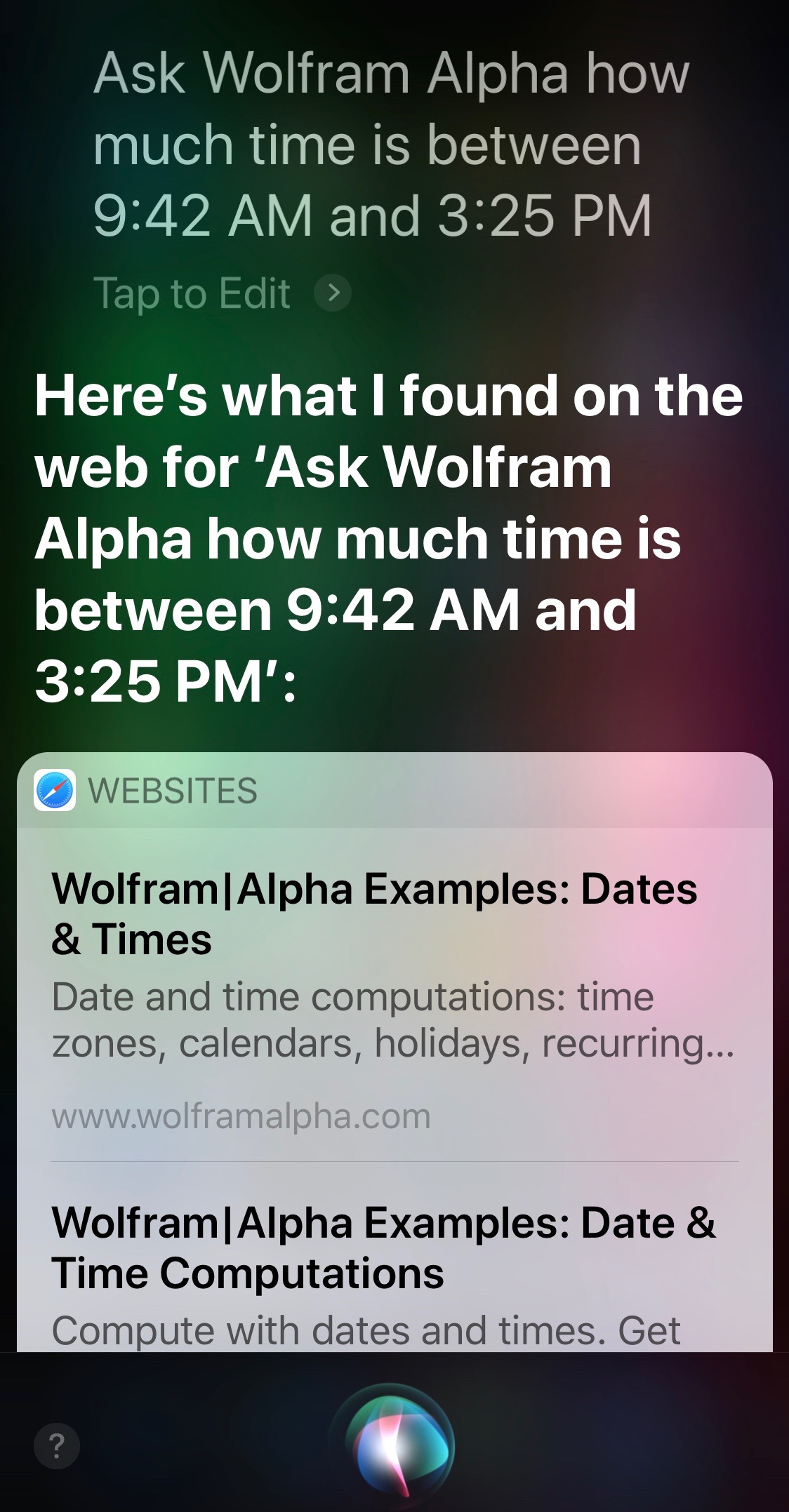 The upshot is that Siri can be good at date and time math, but it needs the right syntax. Not surprising for a computer program, but not how Siri has been promoted by Apple.