A lot of my work on the iPad isn’t really on the iPad. It’s command line work that’s executed on a Mac or a Linux server while I use my iPad as a terminal via SSH. A feature recently added to Prompt has made that much easier.

The problem I’ve always had with using Prompt is that it would disconnect from the server if it was the background app for more than a few minutes. This was a “feature” of iOS that the folks at Panic couldn’t seem to get around. Because it’s common for me to jump between three or four apps while working, I couldn’t always keep Prompt as one of the active apps in Split View, and I’d often have to reconnect.

I tried making the reconnection as painless as possible by using tmux. This worked, but working in a tmux session didn’t allow me to scroll back freely to see the results of old commands. Using the mobile shell, Mosh, and the Blink app had the same scrolling problem. (I should make it clear that when using tmux or mosh I could use keyboard commands to scroll back a page at a time, but I didn’t want to work as if I were sitting at a text-only terminal in 1982. I like working at the command line, but I want to do so in a modern setting.)

In recent months, the terminal feature built in to Textastic has been my workhorse. Because I tend to keep Textastic active in one of the Split View panes as I take notes, edit a program, or write a report, its connection to the server seldom gets culled by the operating system. Unfortunately, its terminal emulation isn’t as full-featured as Prompt’s—it’s fine for simple tasks, but not great for a Jupyter console session.

Recently, though, I learned that a new feature of Prompt may give me everything I want. It’s called Connection Keeper, and when I first heard of it I had two misconceptions:

I was set straight earlier this week by Athanasios Alexadrides and Anders Borum.

Here’s what Panic says in the latest release notes:

Prompt’s new Connection Keeper feature lets you audit exactly when and where you’ve connected to your servers. It also helps keep your connections alive while Prompt is in the background.

You can turn this feature on in “Settings > Connection Keeper”

While I’m sure there are plenty of people who want to track where and when they connected to the server, it’s the part tucked after the “also” that excites me. Since turning Connection Keeper on several days ago, every SSH session in Prompt has had an essentially permanent connection, no matter how long I’ve had Prompt in the background.

When Prompt is connected to a server and in the background, this flag appears in the statusbar:

It’s similar to the background flags that appear when you’re talking on the phone or getting directions in Maps. As with those flags, tap it and you’re taken back to Prompt.

As Panic says in the release notes, you turn Connection Keeper on in Prompt’s settings, but you might have trouble finding it. Like many gear/hamburger “menus” in iPadOS, Prompt’s Settings popup is limited in height. On my 12.9″ iPad, only the items on the left are shown when I tap the gear icon. 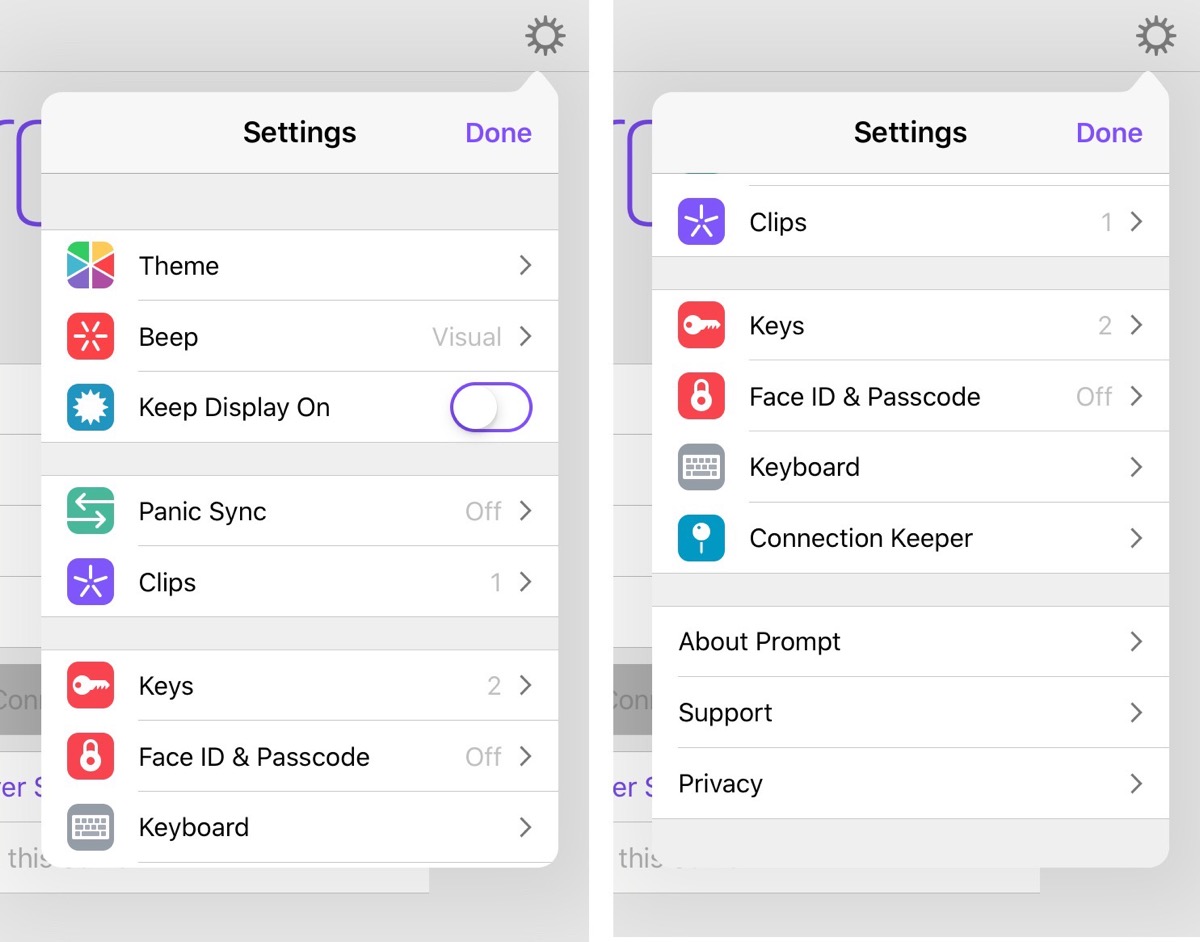 At first, I didn’t notice the line under the Keyboard item that indicates there are more items available. Scrolling up revealed all the other items shown on the right.

Turning Connection Keeper on is pretty much what you’d expect: flip the slider button to the right. 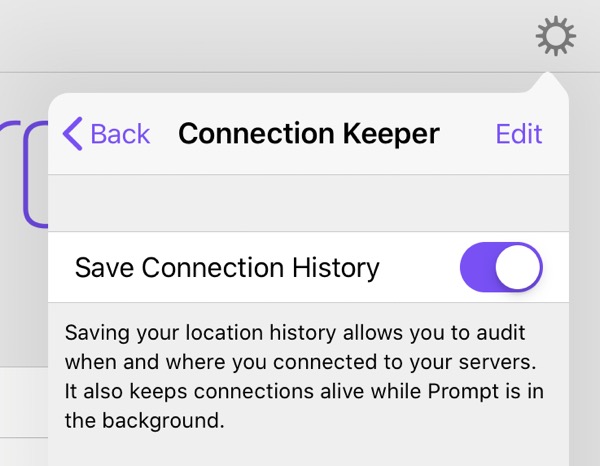 But until that happens, I’m enjoying SSH connections that last as long as I want them to. One more step in the direction of making the iPad into a full-featured computer.