Yesterday I checked on how much Dropbox space I was still using, confirmed that it would fit within the free plan (accounting for the bonuses I had accrued years ago), and canceled my Dropbox Plus subscription. 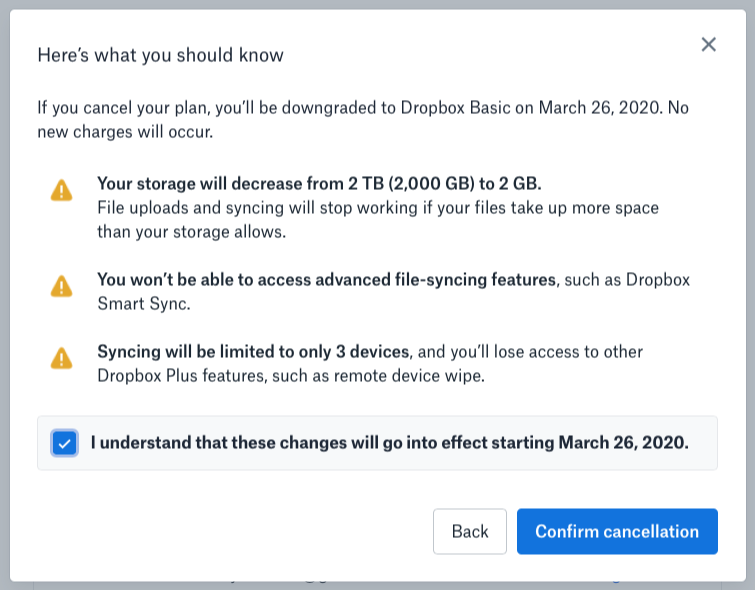 Their warning doesn’t account for my bonus storage, but I assume that’s because they didn’t want to put in the effort to customize the warning for each user.

I haven’t been having the trouble others have with Dropbox using up too much of their processor’s time. I just found over the past year that iCloud Drive was good enough to rely on and was much better when working from my iPad, which I’m doing a lot of. There’s really no reason for me to keep Dropbox Plus.

Well, there was one reason: Sharing files with coworkers and clients. But I can use OneDrive for that, as I’m forced to have an Office 365 subscription to handle Word and Excel files. And maybe I can use iCloud Drive now that yesterday’s update finally opened up the sharing that we were promised back in September.

In any event, I’ll be experimenting over the next couple of weeks with moving those last few folders from Dropbox to iCloud Drive. There are a few apps I use that keep their settings in Dropbox, which was a boon in keeping things consistent across Macs when I first started using it several years ago, but I suspect they all have alternate syncing methods now.