Never believe it’s not so

I’m sure the new iPad Pro will be great, but what every iPad Pro user is eager learn more about are the pointer control enhancements in iPadOS 13.4 and the new Magic Keyboard with its “floating cantilever” design. What I’m most interested in is the stability of iPad when it’s mounted on the Magic Keyboard and how much weight Apple added to the keyboard to achieve that stability.

One thing seems clear: the Magic Keyboard will weigh significantly less than the Brydge Pro+. We would have guessed that anyway, based on Apple’s longstanding obsession with thickness and weight, but the images of the Magic Keyboard show us conceptually how Apple is solving the stability problem.

By articulating the back cover, Apple moved the iPad forward, reducing the tendency for the combo device to tip over backward. We can see this by using one of Apple’s images as a free-body diagram.1 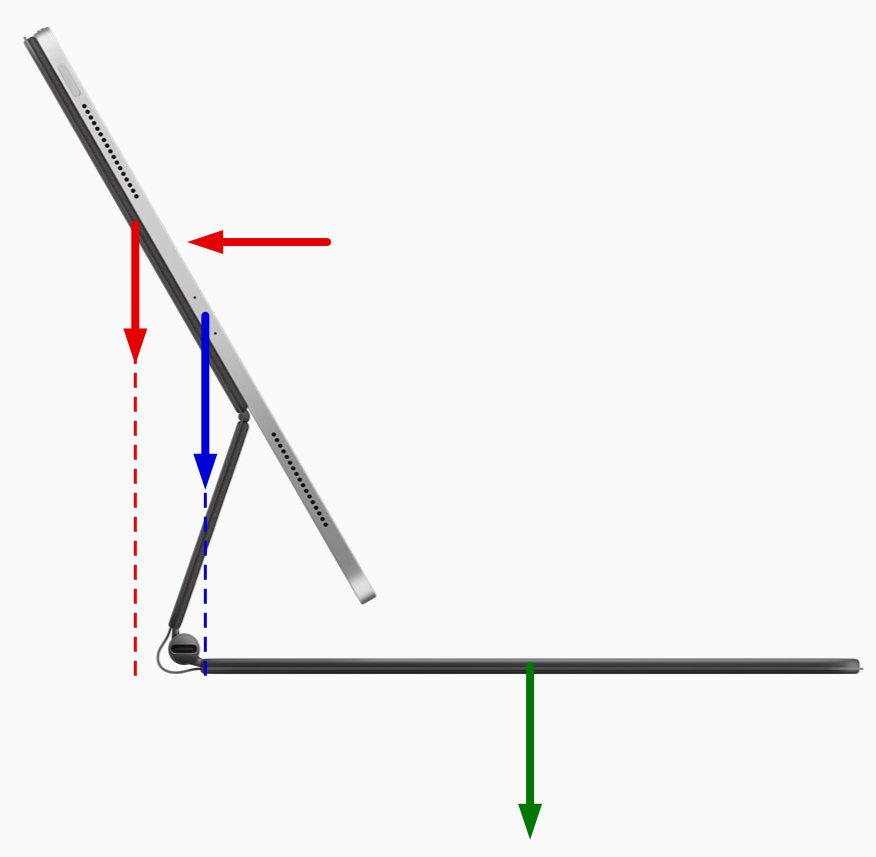 In this configuration, the center of the iPad is almost directly above the back edge of the keyboard, making it essentially neutral with regard to stability. The weight of the lower portion of the back cover (which I haven’t drawn an arrow for because it would make the drawing too crowded) is also pretty much neutral for the same reason.

Instability comes from the weight of the upper portion of the back cover and from the forces we apply when touching the screen, both of which want to rotate the device counterclockwise. These have to be counteracted by a stabilizing force that wants to rotate the device clockwise. The only force we have for that is the weight of the keyboard section.

Stability is ensured by making sure the clockwise moment, which is the product of the keyboard weight and distance of its mass center from the back edge, is greater than the sum of the clockwise moments produced by the upper back cover weight and the touching/tapping forces. One way to do this is to add weight to the keyboard; another is to shift that weight as far forward as possible.2

Achieving stability in real-world use is trickier than the ideal condition shown above. For one thing, the articulated back cover allows the iPad to be set at many angles. Stability has to be ensured in all of those positions, and some of them may shift the iPad’s mass center behind the back edge of the keyboard. The same thing can happen when the keyboard isn’t level. 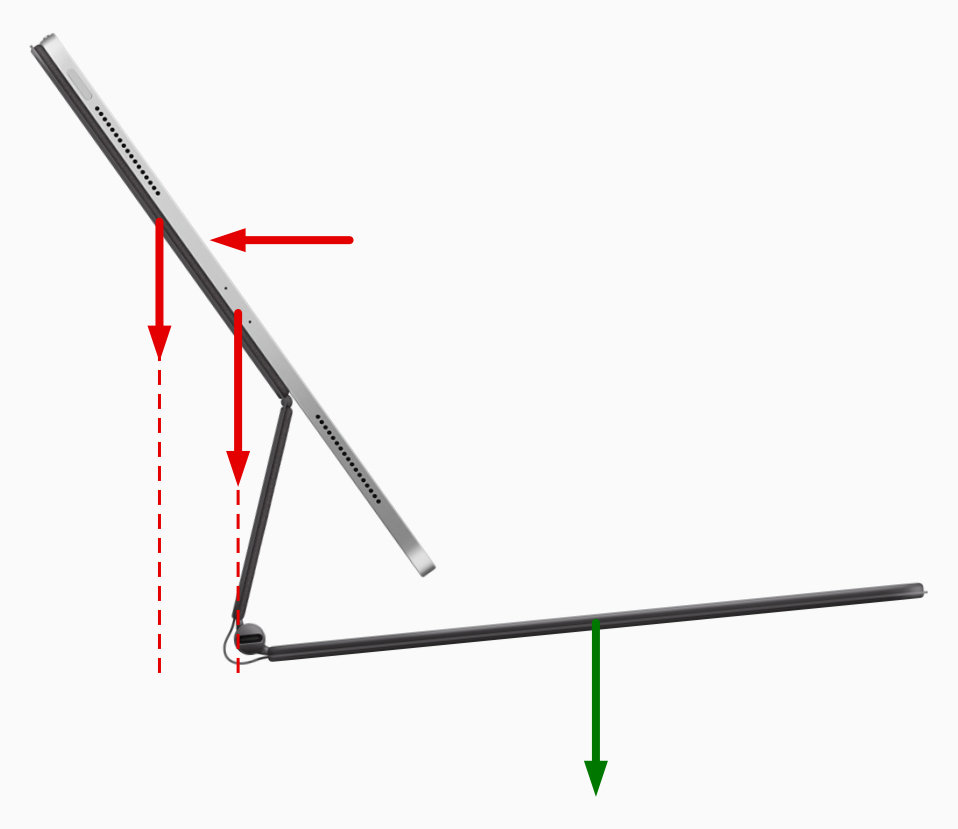 This isn’t rocket science, it’s elementary mechanics, and solving the mechanics problem is easy. We could do it right now if I included the weights and dimensions in the diagrams above. But that doesn’t solve the design problem. Maybe a severely front-weighed keyboard—which would be best for keeping the overall weight to a minimum—would feel awkward as it sat on your lap or as you carried it around folded up. And there are other constraints and considerations—like how far you allow those hinges to rotate—that we haven’t dealt with but which Apple has to.

We know Apple has designed the Magic Keyboard to make our wallets $350 lighter. For the next couple of months, the rest of what they came up with is just a dream of far away.