For the past several days, I’ve been annoying my family with a shortcut. If there are people in your life you want to annoy, you might want to use it. And apart from the annoyance value, it has some Shortcuts programming techniques that I want to memorialize for future use.

My daughter has a dog named Daisy, and on a per-kilobyte basis, she is the biggest topic of conversation in the family texts. There are lots of texts about Daisy, and most of them are photos of her. Even so, there’s never enough Daisy, so I wrote a shortcut to amplify the Daisy content. It takes a single picture of Daisy, 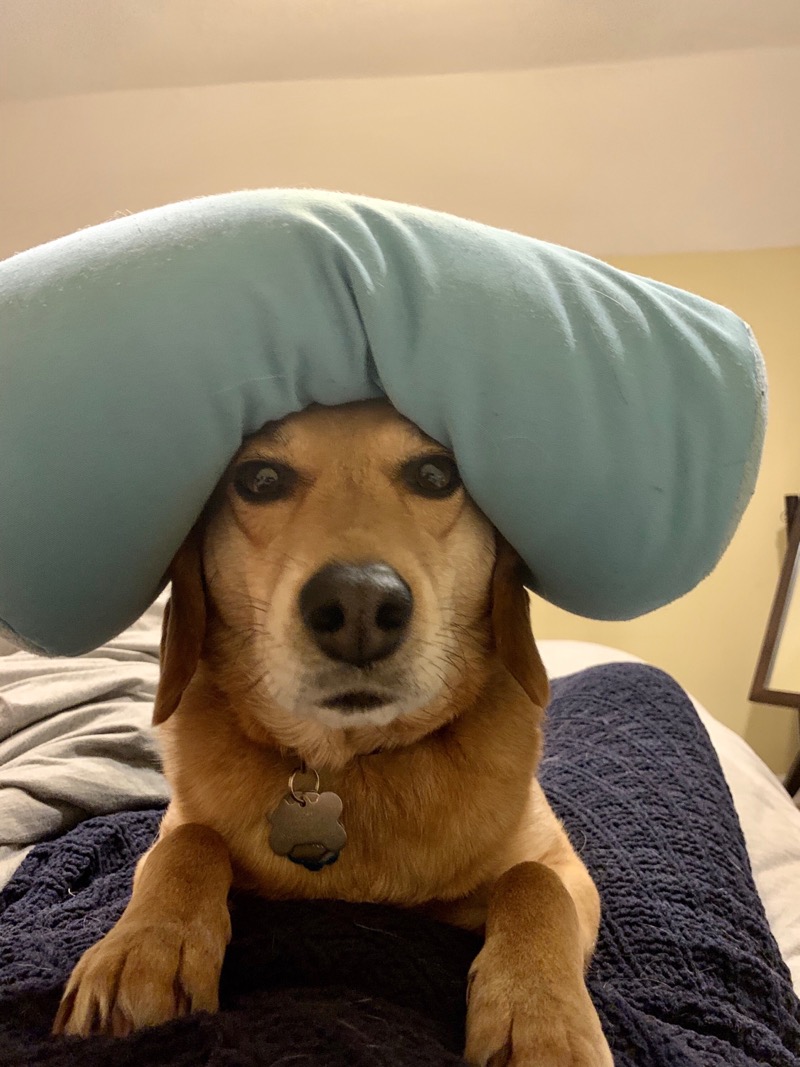 and makes a grid (or small multiple, as Tufte would have it) of Daisys. 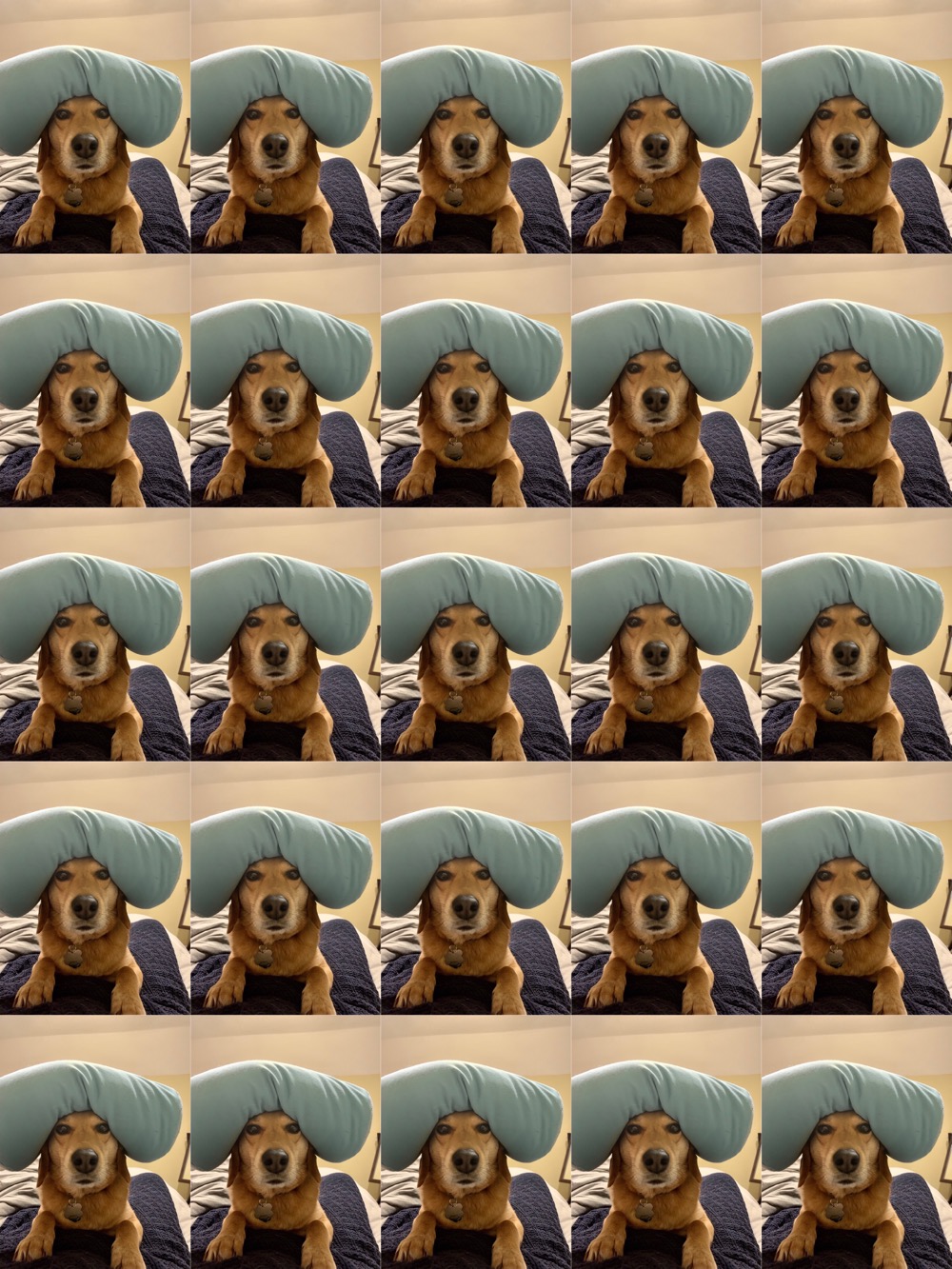 As an option, I can apply a random tint to the component images. 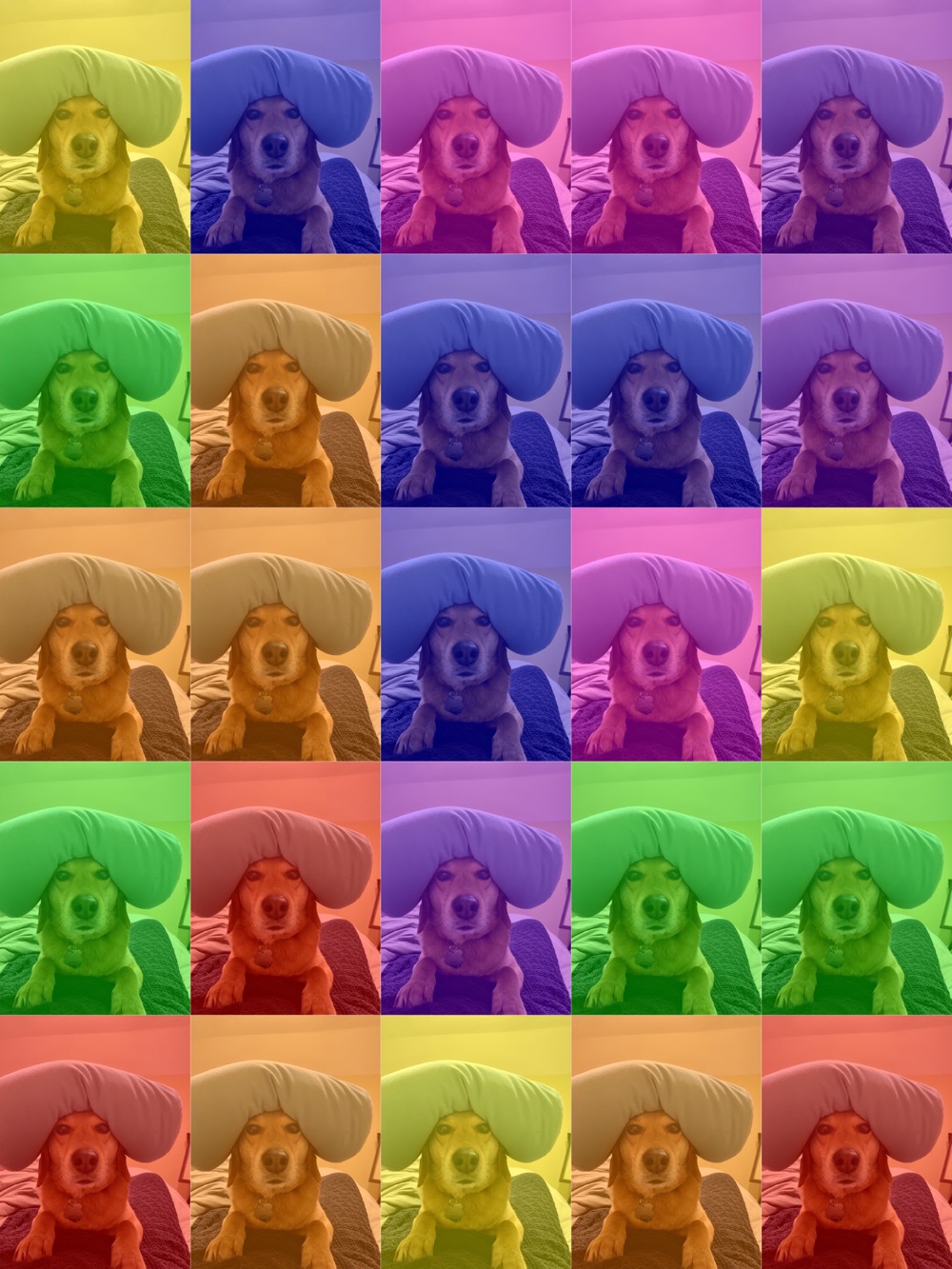 I’ve called this shortcut Warhol for what should be obvious reasons. 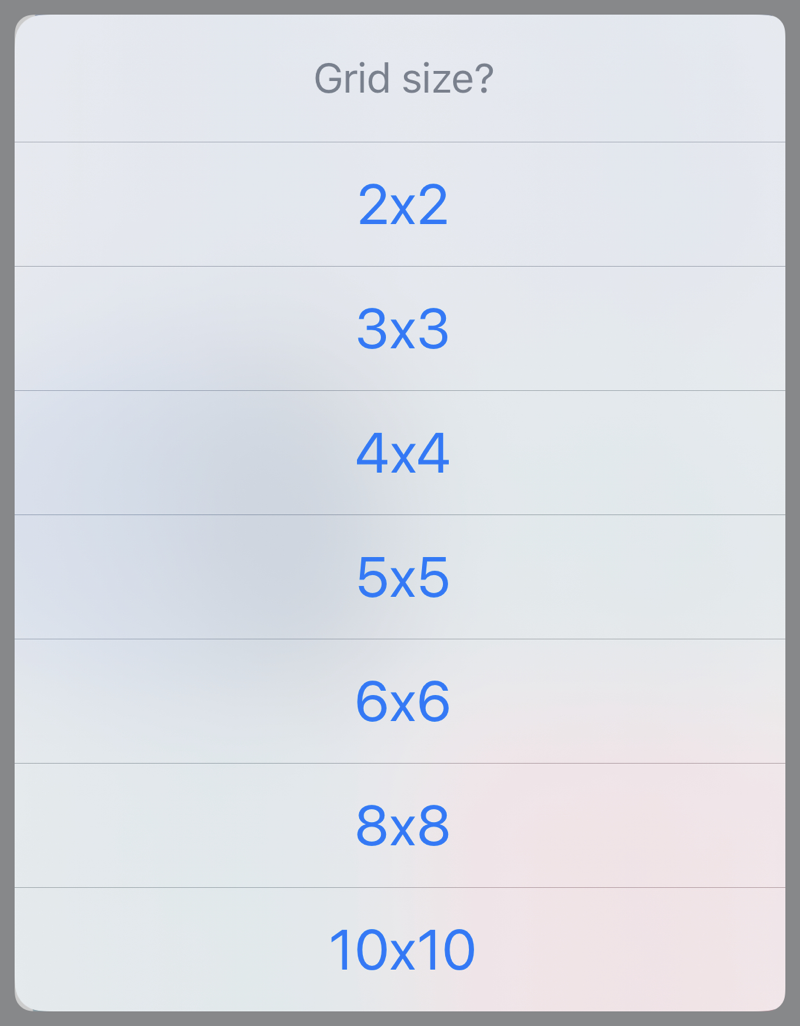 Finally, you’re asked if you want the images tinted or not.

You can download the shortcut and install it. As we’ll see in the description, Warhol does require a bit of external setup: a Photos album named Tints that contains 1×1 PNG images of a single color. Here’s what my Tints album looks like: 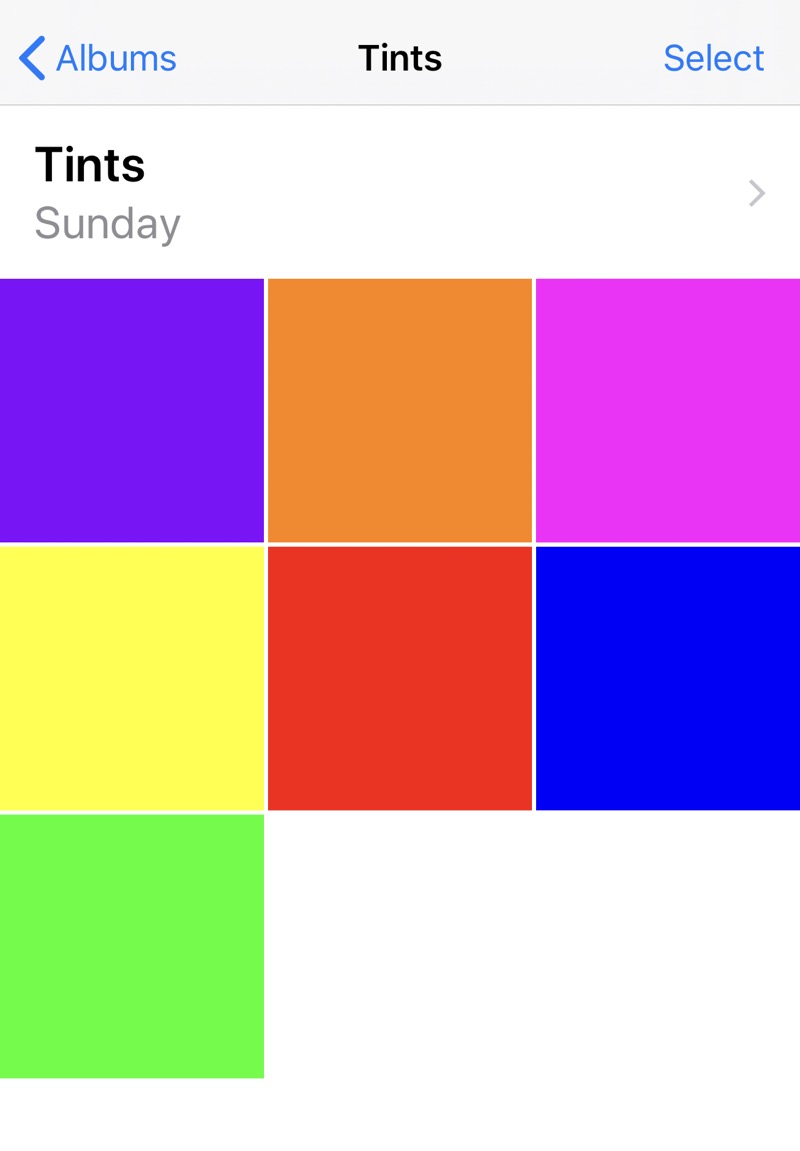 You can download this zip file of my tints, but don’t feel restricted to these colors. Warhol will work with whatever you put in the Tints album. The only restriction—unless you change the Warhol source code—is that the album must be named Tints.

Here are the steps of Warhol:

The dictionary of dictionaries defined in Step 2 contains these values:

It’s not obvious how to use a variable as the repetition count in a Repeat loop, as is done in Steps 7 and 13. When you first add a Repeat step, you’re given a count that you can change by tapping the plus or minus buttons that appear when you touch the count button.

To use a variable for the count instead of a predefined number, you have to press and hold on the count button. A menu like this will appear, 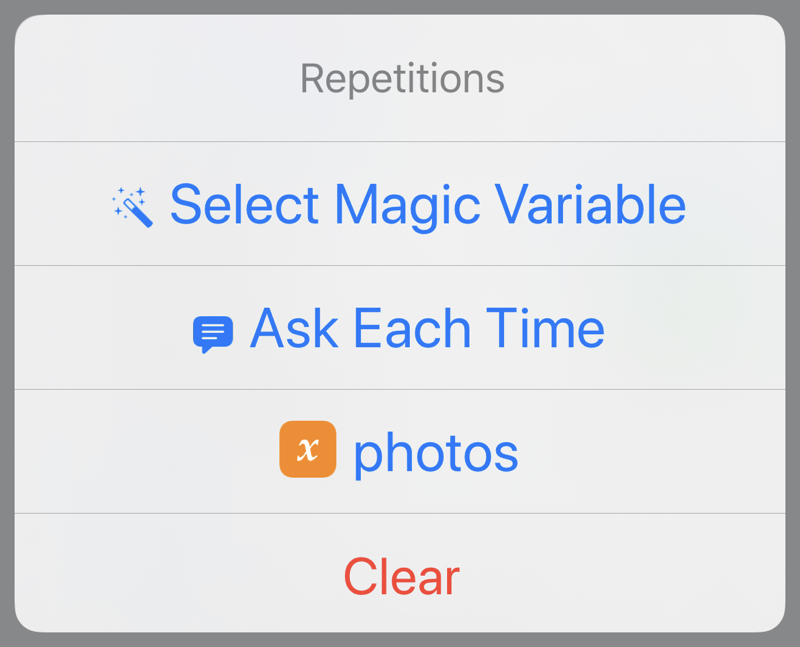 and you’ll be able to choose either a regular variable or a magic variable for the number of repetitions. This is a terrible, undiscoverable design decision. And even after I did discover it (through Googling), I was disappointed to see that the step reads “Repeat count” instead of “Repeat count times.”

You may be wondering where the photos variable in Steps 10 and 14 came from. Basically, it gets made up on the spot and accumulates additional values in a list with each pass through the loop. Here’s the description of Add to Variable:

Appends this action’s input to the specified variable, creating the variable if it does not exist.

This allows you to make a variable hold multiple items.

If you’re used to writing in stricter languages, it may bother you that you don’t have to initialize photos with an empty list before adding values to it. If you’ve programmed in Perl, you’ll probably feel right at home.

I often feel guilty about presenting a completed automation, one that I’ve spent a lot of time writing and rewriting to make clearer, more efficient, and more idiomatic to the language in which it’s written. I can assure you that even a silly program like Warhol didn’t spring out fully formed, like Athena from Zeus’s head. It started out both much simpler, in that it handled fewer grid sizes and couldn’t tint the images, and more complicated, in that it didn’t take advantage of some of the niceties of Shortcuts.

For example, the earliest versions of Warhol presented only a few grid sizes and used a repetitive Choose from Menu section to set the size of the list of images. It was only after I had the basic logic of the shortcut worked out that I switched to using the dictionary of dictionaries to handle the different grid sizes. That change cleaned up a lot of code.

The earlier versions of Warhol also had no logic for resizing the base image before assembling it into a list of images. The Resize Image step came at the end, only after Combine Images had created a truly enormous grid image, usually well over 10,000 pixels wide. These early versions often ran very slowly because of all the data they were slinging around.

I don’t consider any of these inefficiencies in code size or running time to be bugs. They were part of my normal process of development:

Steps 2 and 3 usually lead to revisions in what I came up with in Step 1. Working out a solution almost always gives me a better understanding of what the problem really is.

Ultimately, Warhol is a solution in search of a problem. It’s the kind of automation I create because I think writing it would be fun and I would learn something in the process. On those terms, it was a success.