What is Notes good for?

A few months ago, the Mac Power Users podcast had an episode on note-taking applications in which David and Stephen talked about how they use different notes apps for different kinds of notes. As I listened, I realized that I’ve been sorting my note-taking into two apps, Drafts and Notes, and have been using a fairly simple strategy for deciding between the two.

Before I get into the strategy, I want to congratulate the Notes team for making what may be the only Apple app that has been unambiguously improving over the past few years. While it still shows evidence of the limited and ugly app it started out as, Notes is now one of the best note-taking apps on iOS, with features that nicely balance simplicity and power.

On iOS, I generally start writing notes in Drafts. They get moved into Notes if any of the following apply:

“Need” may be too strong a word for the first two criteria, but I have several notes that are so much more useful to me because of their formatting, I would never want them to go back to plain text.

Here’s an example: For almost as long as I’ve had an iPhone, I’ve kept on it an edited version of the commuter train schedule between Chicago and Naperville, where I live. This started as a set of bookmarks to static web pages I built. It then shifted to plain text, which I kept first in Simplenote, then Elements, and then Drafts.1 Sometime in the past year, I moved it to Notes.

There are six different schedules, which depend on the day of the week and the direction of the train. I keep them in a folder named Metra (which is the name of the rail line). 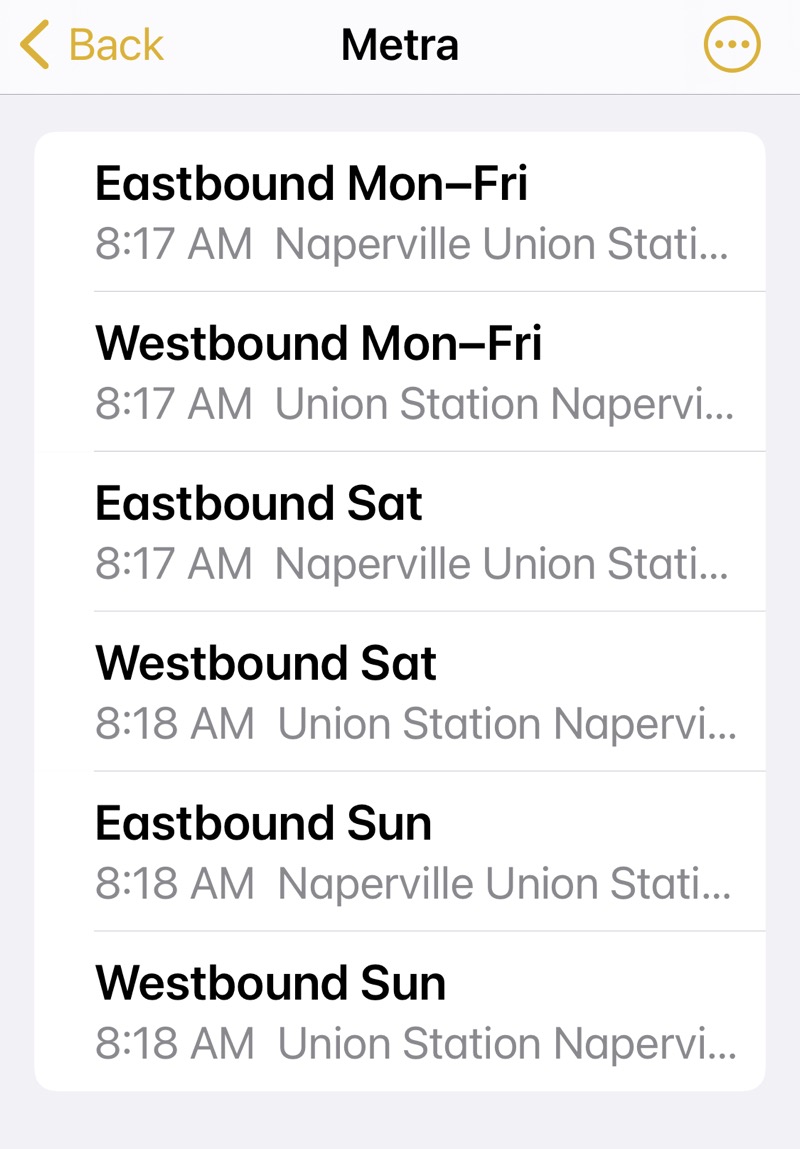 Each note is a two-column table with the times for the Naperville stop and the Union Station stop.

The tabular formatting makes the schedule easier to read than the old plain text versions. And I’m using bold and italic to denote the express trains (which have fewer intermediate stops and therefore run faster). I’d prefer to leave the text style alone and change the background color of those rows, but that’s not an option in Notes.

Of course, Metra has an app and a website for all of this information, but it’s so much faster to have it in a note that opens quickly and contains only the schedule parts I care about.

The train schedule is permanent. The schedules may change, but I’ll always want them. Less permanent are a set of book lists I made this year to keep track of what I own and what I’ve read.

I’ve been reading a lot of mysteries lately, and they tend to come in series. I have a Books folder with the series I’m reading. 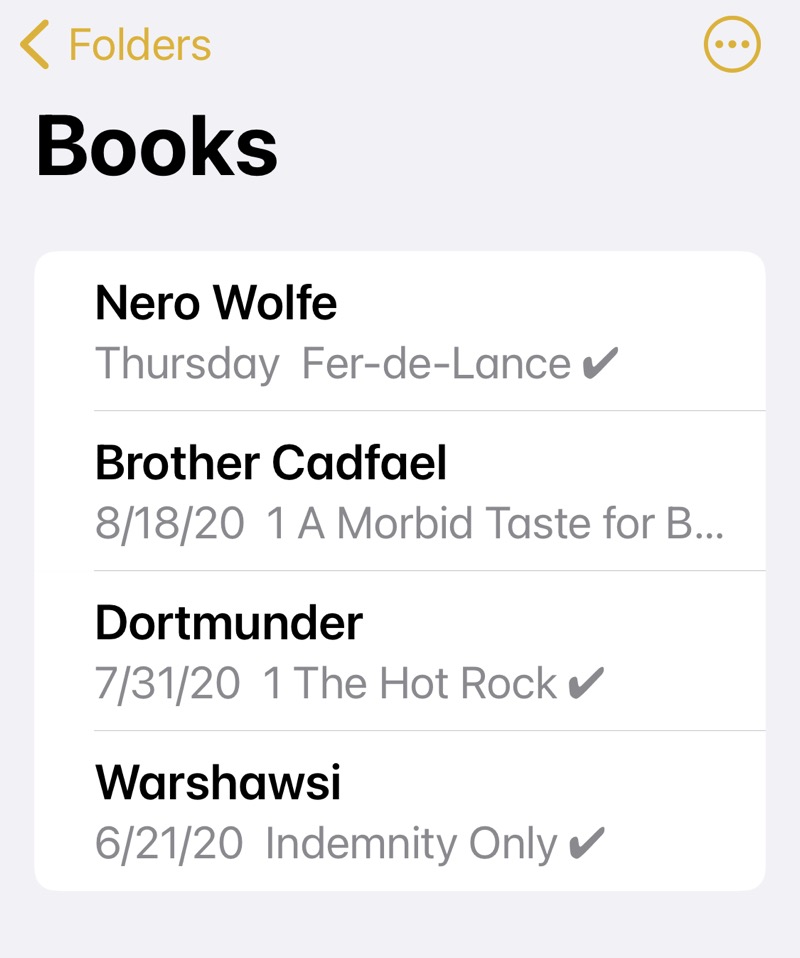 Each series is presented as a checklist.

The circular checkboxes provided by Notes tell me whether I own a book or not. The text checkmarks after the titles (✔︎) tell me whether I’ve read it. The second check is kind of a kludge, but I have a text replacement (chz) defined to make it easy to type the checkmark.

As with the train schedule, this could be a plain text note, but it’s more convenient and easier to read with formatting.

Although these lists are long-lasting, I don’t consider them permanent. When I’m done reading a series, I’ll delete its list. The Brother Cadfael list is one book away from being deleted.

I know many of you will suggest Goodreads for this kind of tracking. But I’m not really interested in all the extras that Goodreads provides, and don’t want to mess with a website or another app just to keep track of simple lists. Notes is a good fit for my needs.

As for personal information, I have locked notes for software licenses, car registrations and licenses, insurance information, contact lens and glasses prescriptions, and so on. Nothing that’s super sensitive, just stuff that I think should be somewhat protected. It’s material I used to keep in 1Password and wouldn’t feel comfortable keeping in Drafts.

I opened Notes the other day and was surprised at how many notes I have in there. My experience parallels David’s and Stephen’s—it’s gone from an app I had no use for whatsoever to one that I open nearly every day.