A few days ago, I updated my Watch Series 3 to watchOS 7.3. It was, as many Series 3 owners would have predicted, a nightmare. The worst Apple experience I’ve had in the 35 years I’ve been a customer.

I knew it was going to be difficult. Upgrading from watchOS 6 to 7 a few months ago was more work than I wanted, and I thought at the time that I may never update again. But I’ve been planning to subscribe to Apple One, and I needed watchOS 7.3 to try out Fitness+.

The main problem is storage space. WatchOS updates always seem to require 2.7 GB free (at least that’s what the error messages say), and my watch typically doesn’t believe it has that much. Here, for example, is what it’s reporting now: 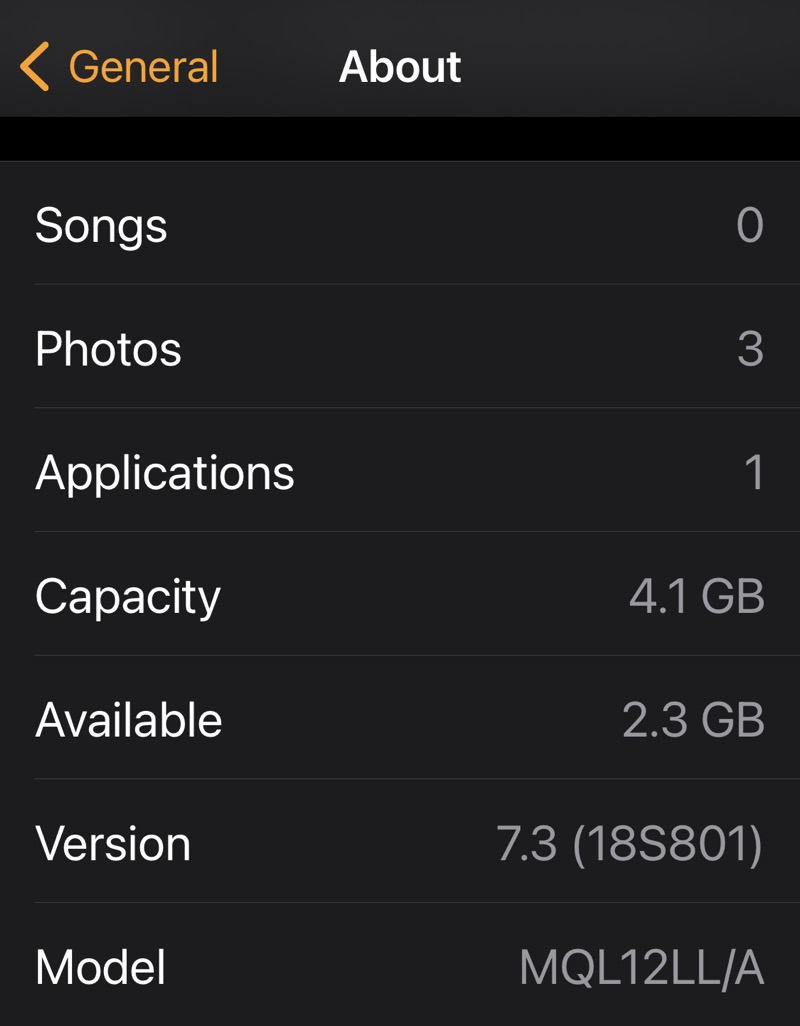 No music, three photos (I don’t know what they are; I don’t have any albums linked to the watch), and just one app—and still I wouldn’t have enough space to upgrade if watchOS 7.4 were released today.

The available space reported in the screenshot is a lie. Somehow, watchOS is counting more space as being used than is actually the case. If you try to upgrade, it will spend a couple of hours downloading and then—after the download finishes—tell you that it doesn’t have enough room. It will suggest deleting apps, photos, and music to free up space, but those suggestions won’t work because the problem is not with how much space you’re using; it’s with how much space the OS thinks you’re using, and you have no control over that.

When faced with this problem a few days ago, I reset the watch, erasing everything and starting over from scratch.1 When this lengthy process was over, I re-paired my watch to my phone and set it up as if it were a new watch. This was also a lengthy process. When it was done, I had a fresh Series 3 with watchOS 7.0.3 installed and over 3 GB of free space. Why it installed 7.0.3 instead of 7.3, I don’t really know. If I had restored from a backup, 7.0.3 would make sense, but I didn’t.

Anyway, it was now time to update to 7.3. I put the watch on its charger, got that started, and went back to work, occasionally checking in on its progress. Two to three hours later, there was an error message on my phone saying that the updated couldn’t complete because it didn’t have an internet connection. This was bullshit; the wifi in the house was working perfectly. I suspect Apple’s own intermittent server problems that day were the real reason the connection was lost. But in a very Apple way, the error message was “You’re wifi-ing it wrong.”

Oh well, I thought, no big deal. The download had finished, so I’ll just restart the update. It’ll see that it’s been downloaded and will pick up from there. No. It started downloading again, and now the previous download meant there wasn’t enough free space. Had Craig Federighi been nearby, I’d be facing homicide charges.

So I did the whole thing over again. Yes, I know the definition of insanity, but I also know that Apple’s software has become so complex and out of control that it’s now a chaotic system. A butterfly beating its wings in Japan could make my update work this time.

As day turned to night, the multi-hour process went forward. People on Twitter were giving me suggestions, but I didn’t want to touch it while it was in the middle of working. Again, I checked its progress a few times, and things seemed to be working the way they were supposed to. Eventually, I saw that the upgrade process had stopped. Success? No. It was now telling me that the 7.3 update was available for me to download and install. What had it been doing the past few hours while it was telling me it was updating? Fuck if I know. Once again, Federighi escaped my wrath by cleverly hiding out in California.

So now it’s getting late. Should I try again and hope that I wake up tomorrow with an updated watch? I decided to incorporate a couple of suggestions from Twitter:

Once again, I set my watch on the charger and started the update process. This time, I didn’t check the progress because I was asleep. And when I woke up, magically, my watch was at 7.3.

I feel certain that most Series 3 watches don’t have this problem. After all, Apple is still selling the Series 3, and if most of them couldn’t be updated, we would have heard about it. But there are many Series 3 owners who have either gone through the daylong process I did or are stuck on an old version of watchOS. Some of them, with a bad case of what I call Cupertino Syndrome, have bought newer watches just to be able to run the current OS.

Weirdly though, I haven’t heard from a single Series 3 owner who’s been able to update watchOS with no problem. Given the nature of Twitter, you’d think I’d’ve heard at least one “works for me” after complaining about both the 6-to-7 transition and this latest fiasco. Maybe I’ll hear some success stories now.

As for my future with the Apple Watch, I think I’ll be hanging onto this one for another year. I still get well over a day of battery life from it, and the Series 6 doesn’t have enough compelling features to make me jump to it. I’m hoping for a big improvement in the Series 7.

And, as always, I’m hoping Apple solves its OS quality problems. Stochastic software is not a selling point.