You may have seen Steve Mould’s recent video, called “The Spring Paradox.” If not, take a few minutes, and we’ll reconvene when you’re done.

As you might expect, I’m not interested in the traffic problem that takes up the second half of the video. But the spring problem that gives the video its name is cute, and Mould does a good job explaining how the behavior is related to the difference between springs in series and springs in parallel. But…

Surely the weight won’t rise under all conditions. If the two longer strings, the red and green ones, were much longer—or if the springs were much stiffer—the weight would drop. So what restrictions did Mould have to adhere to when he set up his demonstration? 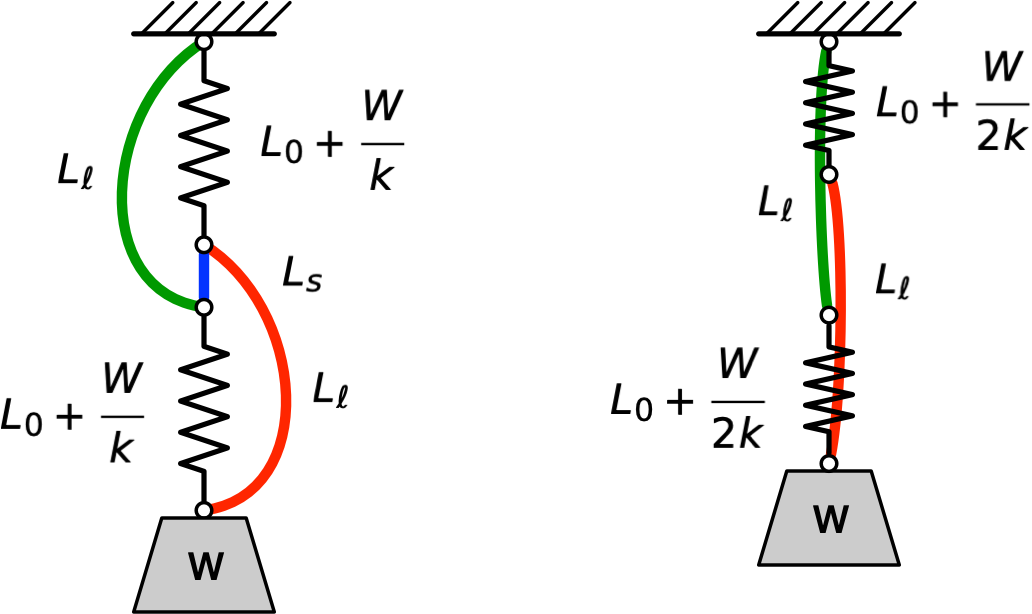 (The strings should be straight on the right, but I’ve drawn them curved so they don’t overlap.)

Our starting assumptions are:

Recall that Hooke’s Law says that the stretch in a spring, \(x\) is related to the force acting on it, \(F\), through the simple linear relationship

Strictly speaking, we could relax the last condition and say only that the two springs must have the same force-deflection relationship. It doesn’t have to be a linear relationship, but that will make the algebra easier.1

In the “before” state, each spring is carrying a the full weight, \(W\), and is stretched a distance \(\frac{W}{k}\). Therefore, the distance between the ceiling and the weight is

where \(L_s\) is the length of the short blue string.

In the “after” state, each spring is carrying half the weight, and is stretched a distance \(\frac{W}{2k}\). Therefore, the distance between the ceiling and the weight is

For the weight to go up when the blue string is cut, we must have

or, after some algebra,

This sets the upper bound on the lengths of the red and green strings if we want the weight to behave as it does in the video. If the strings are longer than this, the weight will go down when the blue string is cut.

There’s also a lower bound on \(L_{\ell}\). The problem starts with slack in the red and green strings, so

Putting the two restrictions together, we have

So to get the behavior we see in the video, the lengths of the red and green strings have to be within a range of

In the video, this is a relatively long range, because the springs are pretty stretchy. But if the strings were stiff, you’d have to be quite precise in setting their lengths. In the limit as \(k \rightarrow \infty\), which is what we’d see if we replaced the springs with inextensible strings, upward movement would be impossible—we can’t achieve both inequalities.

This, I suspect, is part of the reason the behavior seems weird to us. When we see the initial setup, our brains tend to think of the springs as being of a particular length that won’t change. We don’t expect them to shorten by more than the amount of slack in the red and green strings. Maybe if we had seen the springs at their unstretched length before the video started, we wouldn’t be as surprised to see them contract and the weight move up.

One last calculation: how much does the weight move up? Subtracting the “after” length from the “before” length gives us

After some cancellation, we get

which, after multiplying through by -1 and flipping the inequality signs, gives us

Is it a coincidence that the upper bound here is the same as the range of string length we calculated earlier? What do you think?