then its time derivative, \(\dot{z}\), will also undergo exponential growth,

and they’ll both appear as straight lines when plotted against \(t\) on a semilog plot. We saw that with real data, the \(\dot{z}\) plot has more scatter than the \(z\) plot and deviates from linearity more readily. We could, presumably, use the greater sensitivity of \(\dot{z}\) to more quickly recognize the much-desired “flattening of the curve” when it comes.

In his “How To Tell If We’re Beating COVID-19” video, Henry Reich of Minute Physics does a good job of discussing the value of looking at \(\dot{z}\), but then he goes in a slightly different direction. His Idea 3 is “Don’t Plot Against Time,” and he recommends we plot \(\dot{z}\) against \(z\) as the best way to see the start of any curve flattening that may occur. I’m not convinced.

Looking at Aatish Batia’s Covid Trends plot, which is featured in the video, we see that South Korea’s exponential growth tails off significantly when the total number of cases is nearing 5,000. 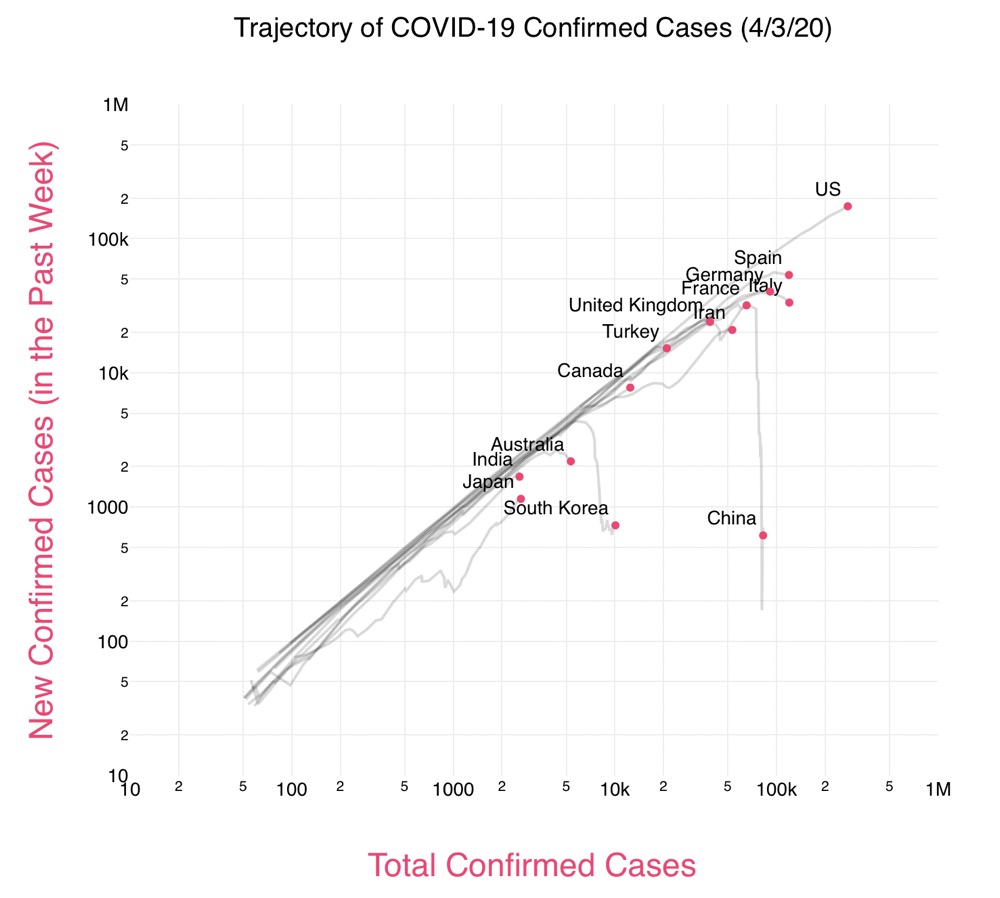 Reich shows this near the 4-minute mark in the video. But earlier, starting at around 2:20, he shows exactly the same thing looking only at new cases vs. time. Here’s the plot: 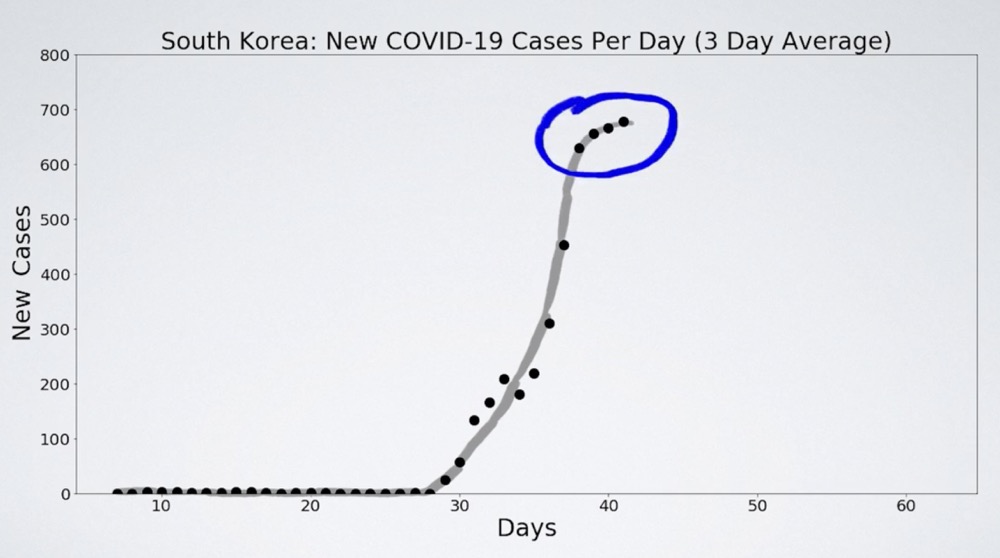 And there is a serious disadvantage to plotting \(\dot{z}\) vs. \(z\), at least if you do it on a log-log scale as is done in the video. Returning to our expressions for exponential growth, notice that we can express \(\dot{z}\) in terms of \(z\):

(By the way, this trick of noting that \(\dot{z}\) is a multiple of \(z\) is nearly as old as calculus itself. It is the fundamental fact we use to get the characteristic equation when solving linear differential equations with constant coefficients.)

But in watching the video, you’ll note that Reich generally doesn’t plot \(\dot{z}\) against \(z\) on linear scales. He uses log scales for both. And log scales are the default in the Covid Trends plot.

So what happens when we use log scales? Taking the log of both sides of the above equation, we get

which will look like a straight line with a slope of 1 no matter what the value of \(\beta\) is. The effect of \(\beta\) on a log-log plot is to shift the line up or down.

This is why the Reich-Bhatia plot above shows every country bundled together. During exponential growth, they have the same slope and differ only by slight shifts up and down.

How slight are the up/down shifts? We can get a sense of that by looking at different values of \(\beta\) that come out of the data. Note first that Reich and Bhatia are using weekly changes rather than daily changes.1 If cumulative cases increase by a factor of 8 over one week (which has happened),

The \((t - 1)\) term comes from the fact that we’re measuring \(t\) in weeks and we’re looking at the ratio between today and one week ago.

Similarly, if the cumulative case count is increasing by a factor of 4 over one week (which has also happened), then \(\beta = \log 4 = 1.386\). Both of these have units of reciprocal weeks.

Now let’s look at the change in confirmed cases over the past week:

If we’re plotting this on a base-10 log scale, we’re really plotting

and the up/down shift from one value of \(\beta\) to another will be due to the difference in the final term. If \(\beta = \log 8\), then that term will be

The difference between these is only 0.0669, where the distance between successive powers of ten (what’s typically called a decade on a logarithmic scale) is 1. In other words, a fairly significant shift in \(\beta\) results in a very small shift in the line as plotted on a log-log graph. This is why the countries are bundled so closely together in the Reich-Bhatia plot.

Let’s look at some specific examples. We’ll take France, Germany, Spain and the US as of about a week ago, before any of the plots started curling over. Here’s the log-log plot: 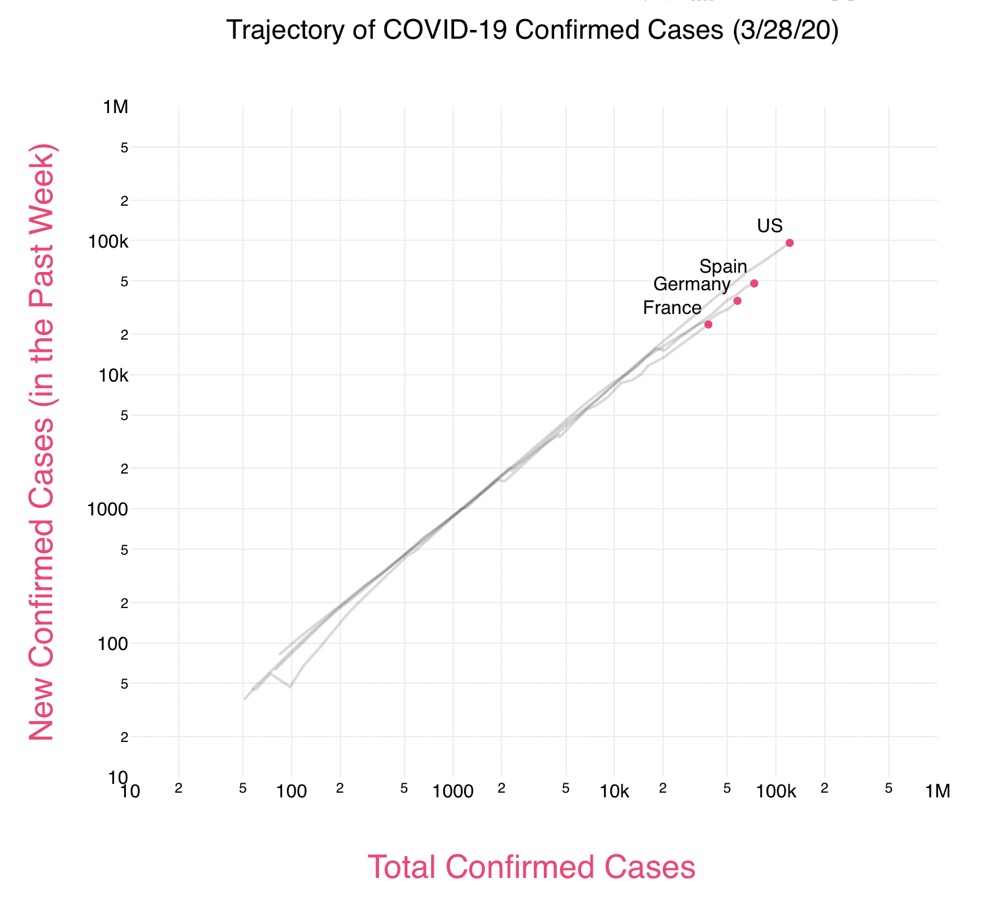 And here’s the same data plotted with linear scales. 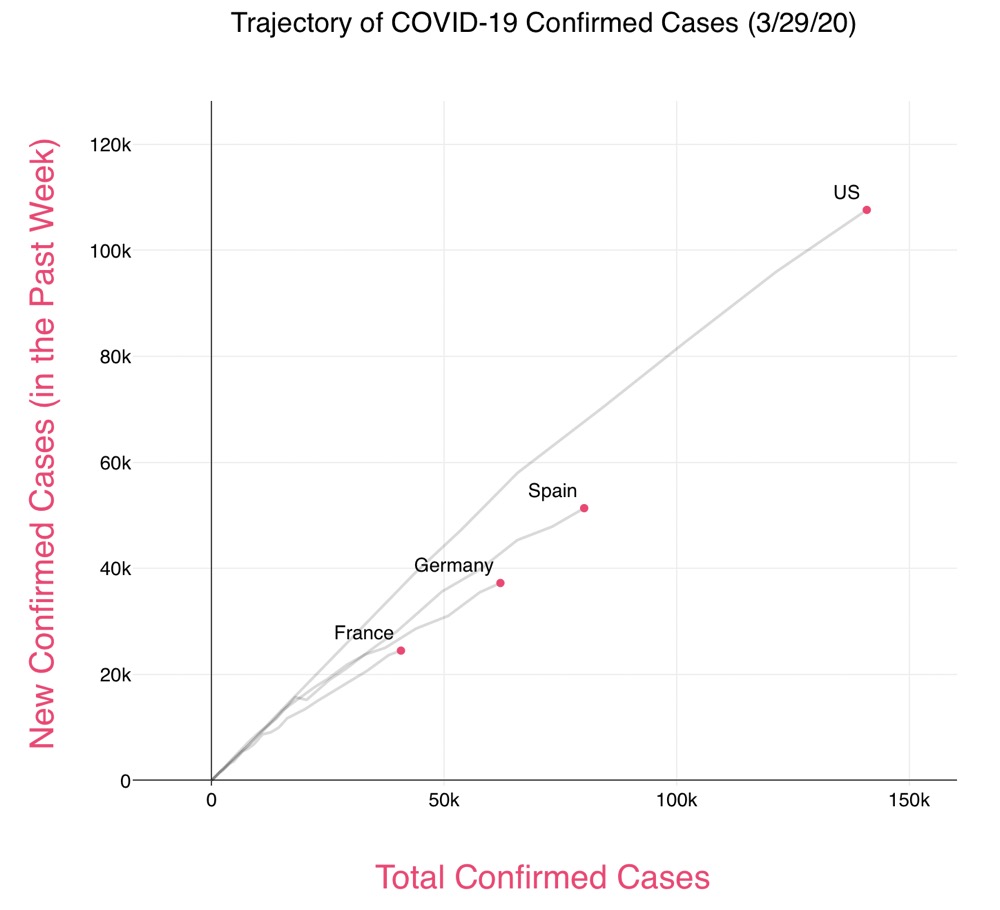 The difference between the countries when the cumulative count is above 10,000 cases is certainly possible to see on the log-log plot, but it’s more obvious on the linear-linear plot. You’d also see the differences if you plotted the change in cases against time, as we did yesterday and as Reich does in the South Korea example.

To Bhatia’s credit, he made the graph on the Covid Trends page in a way that allows visitors to switch between linear and logarithmic scales and to pick the countries they want to plot. That’s how I made the two plots above. So you can make uncluttered plots that more clearly show differences in \(\beta\) if you choose to do so.

But it appears that the downplaying of differences is one of the goals of the log-log plot. At the top of the Covid Trends page is this:

We are in this together, but if you make it look as if three doublings per week is about the same as two doublings per week, you’re leaving your viewers with a mistaken impression. Because there is no cure, achieving a low \(\beta\) through behavioral changes is important, even before there’s any flattening of the curve, because it gives each country’s health care system and the world’s medical manufacturing base more time to ramp up to meet the demand.