Another small adventure in data cleaning

In a project at work, I had a folder with dozens of engineering drawings for a piece of construction equipment. As part of a report, I needed to generate a list of all the drawings I had according to their drawing numbers, and I also needed to make sure my list corresponded to the drawings in a list of documents that the client had compiled. This would be simple if

Of course, if any of these were true, I wouldn’t be writing this post.

Let’s start with the drawing files I had. They had come to me via email and cloud links, and I had saved them all in a folder cleverly named “drawings.” Although their file names weren’t consistent, they did start with the file number, a string of 7–10 digits, and they were all PDFs. So I was able to put them all on the clipboard with this command:

If you’re wondering why I had files that weren’t drawings in the drawings folder, I can only say in my defense that the non-drawing files I put in that folder—like material specifications—were close enough to drawings that I thought they belonged there.

I then pasted the list of drawing files into a fresh BBEdit document. Although there are ways to do the next few filtering steps directly from the command line, I find that things typically go faster if I can see the results (and can undo when I make a mistake). The list of drawings looked like this (except there were about 100 drawings, not 7):

Most of the file names had an underscore and a capital letter following the drawing number. These were the revision codes1 and were necessary to include in my list. So the first drawing above would go in my list as

As you can see, though, some files didn’t indicate any revisions and some had an explicit “rev” in their name. I wanted to handle all of them, if possible.

I brought up BBEdit’s Find dialog and built the regular expression necessary to do most of the extraction.

puts the drawing number and revision code in the format I want.

After clicking the Replace All button, I got this,

which is obviously wrong for the drawings that had no revision code but worked for all the others. I’m sure there’s a clever way to make a regex that avoids the “dangling Rev,” but clever takes time, and BBEdit already has a simple way to delete strings at the end of a line. It’s the Prefix/Suffix Lines… command in the Text menu.

This removes the ” Rev.” from all the lines that end with that, leaving the others untouched.

Now we move on to the unfortunate Word document with multilevel lists that contained, in addition to all the drawings the client thought I had, a long list of other documents. I opened the document, copied all the text, and pasted it into a new BBEdit document. To get rid of all the lines that didn’t include a drawing number, I used BBEdit’s Process Lines Containing… command and set it up to delete lines that did not contain a string of 7 to 10 digits. 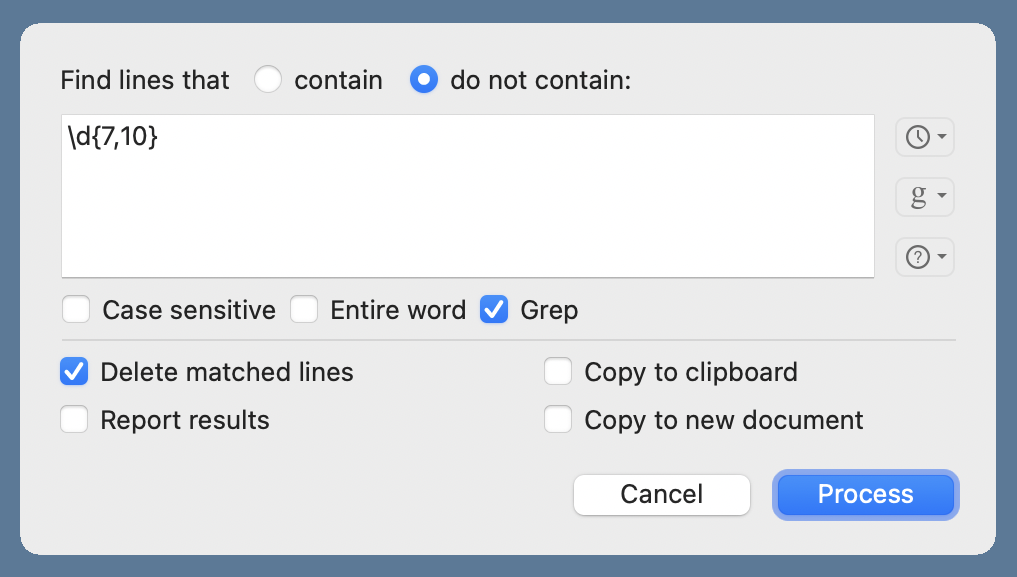 Because Word creates nested lists by changing the left margin and indentation, there were no leading tabs in any of the remaining lines. But every line had some combination of leading numbers, letters, periods, and closing parentheses followed by a tab. Like this:

While this is a mess of inconsistency, it’s not that hard to pull out the drawing number and revision code.

The Find regex is

and the Replace string is

As before, this left several “dangling Revs,” but I was able to use the Prefix/Suffix Lines… command to get rid of them.

With two files of clean drawing lists in hand, I used the comm command, which has become a favorite, to get the list of drawings that I had but were not in the client’s list,

BBEdit is great at this sort of interactive data cleaning. It puts the power of traditional command-line text filtering tools into a nice GUI. For example, the Process Lines Containing… command I used above is basically a sed command, but with an easy way to undo my mistakes.